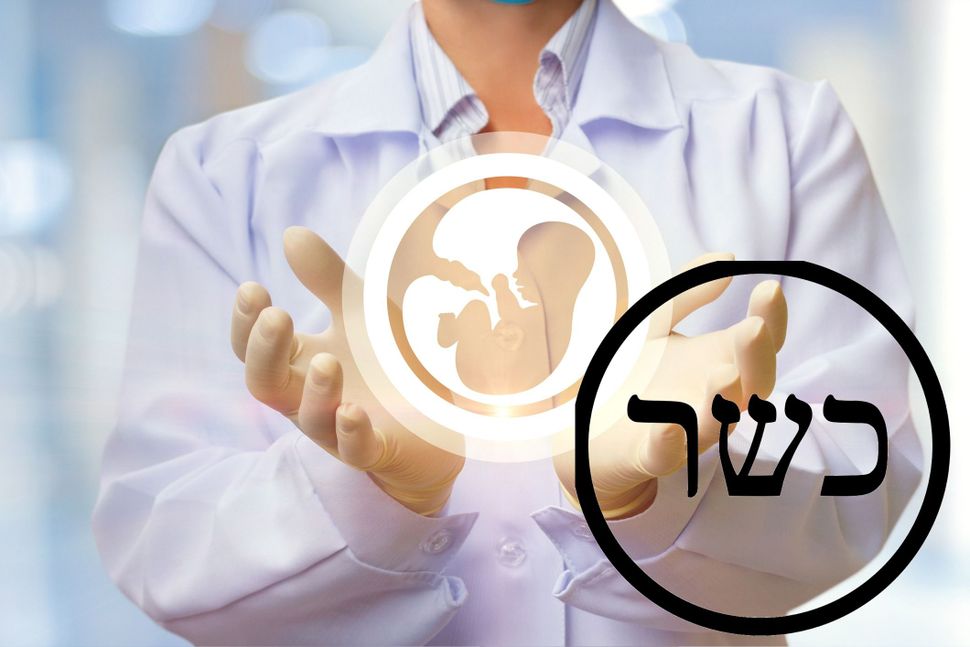 In the doctor’s hands, the icon of the embryo. Image by iStock

When Esther and her husband decided to do fertility treatment, the modern Orthodox couple consulted with their rabbi. “We didn’t think twice about it,” said the New Jersey woman who preferred not to give her full name. She had lost a few pregnancies before starting in vitro fertilization (IVF), the medical process of extracting a woman’s eggs and inseminating them with her husband’s sperm in a lab before transferring embryos back to the womb.

“During that part of our journey, we were very, very careful about everything and going by the book,” she said, telling how she began to pray more fervently, to be more careful about keeping kosher, and even immersing in the mikveh (ritual bath) after a woman who was nine months pregnant – considered to be good luck for infertility.

Esther’s rabbi also told them if they wanted to do fertility treatment, they’d need to have a fertility supervisor every step of IVF.

A “fertility mashgicha,” like a kosher supervisor at a restaurant or food production facility, is a religious person (usually a woman) present for almost every fertility lab procedure, to ensure the right egg and the right sperm are being combined and returned to the right woman. The mashgicha may be called to the lab 5-6 times per IVF cycle, including for procurement of sperm, egg retrieval and fertilization, embryo checks on day 1 and 3 and finally, embryo transfer. She checks a seal on the specimen to ensure it’s the right one.

“Every religious person would not buy potato chips and soda without an OU on it,” Rabbi Shaul Rosen, Founder and CEO of A Time, a Jewish organization providing information, resources, and assistance at every step of the road to parenthood. addressing issues beyond the scope of infertility.

“In Jewish life, when something’s out of our control we always wants religious observation. That’s just potato chips and soda – here we’re talking about generations, when the whole Jewish religion is based on yichus [lineage] – who you’re coming from and who your ancestors are.”

A Time employs almost 40 mashgichot, or supervisors, paid for solely by the non-profit organization.

Reproduction is “extremely private,” Rabbi Rosen notes, and fertility treatment is putting it in other people’s hands. “Extra supervision gives the couple peace of mind that they don’t have to worry about it.”

Esther agrees. “I really liked having [a mashgicha]. It made us feel better about the process.” The supervisor was in the room when she was getting transfusions to stop miscarriage (Esther had had 8) and gave Esther a blessing, helped distract her from her fear of needles and was generally an extra support system. “Her guaranteeing the embryo put back in was definitely ours made me feel more confident,” said Esther, who now has two sons thanks to IVF.

There is no shortage of stories about errors in fertility labs around the world. In 2009, Carolyn Savage from Ohio gave birth to another woman’s son after an embryo mix-up. That same year an IVF center in New Orleans had to shut down due to a possible mix-up in labeling frozen embryos, a move that affected more than 100 patients. In 2002 a white couple gave birth to black twins after an IVF mix-up in England. In 1999, a 40-year-old New York white woman who gave birth to two children – one white and one black – after IVF treatment. In 1995, a Dutch couple gave birth to twins – one black and one white – because another man’s sperm had fertilized some of her eggs.

“Clinics must disclose errors in which the wrong sperm are used for insemination, or gametes [eggs] or embryos are mistakenly switched resulting in fertilization, embryo transfer, implantation, or the birth of a child with a different genetic parentage than intended, as soon as they are discovered,” The American Society of Reproductive Medicine writes in an ethics committee opinion.

In fact, said Rabbi Richard Weiss, of the Young Israel of Hillcrest in Queens and an adjunct assistant professor of biology at Yeshiva University with a special interest in bioethics, the European Society of Human Reproduction  and Biology amended its guidelines for verification and traceability, “which is somewhat consistent with halacha.” The ESHRE guidelines say: “During critical steps (such as first identification of cells and tissues, each time biological material is moved from one container to another and at final destination e.g. embryo transfer, cryocontainer), double-checks by a second person (witness) and/or an electronic identification system is strongly advised.”

There are times, though, when the mix-ups are not just errors but intentional. Just this June an 80-year-old Canadian doctor, once termed the “Baby God,” was stripped of his medical license for using the wrong sperm, including his own, to impregnate women as early as 1978.

It was these types of malfeasance that caused some rabbinical opposition to IVF, according to Dr. Richard Grazi, medical director of Genesis fertility clinic in Brooklyn and author of Overcoming Infertility: A Guide for Jewish Couples “Not long after IVF first became available, Rabbi Eliezer Waldenberg, the head of the Jewish court in Jerusalem, in his [21-volume ethics] responsa (“Tzitz Eliezer”) came up with a lot of reason against IVF: One of his points was that doctors could not always be trusted to handle eggs and sperm, since they have a vested interest in touting their pregnancy rates. In the years that followed, Dr. Cecil Jacobson, a highly regarded fertility specialist in Virginia, was imprisoned after it was discovered that he had used his own sperm to inseminate [up to 75 of] his patients.” California doctor Ricardo Asch was indicted for stealing eggs from young women undergoing IVF in order to create pregnancies in older women who were unaware of what he had done.

In the late 1990s, Israeli doctors were also accused of stealing women’s eggs, which is why egg donation was made illegal in Israel in 2000. (Ten years later, the procedure was permitted again.)

Dr. Grazi said there is no particular time in history that IVF became permissible. Gradually, rabbis approved the use of fertility treatment —with supervision. Hence, mashgichot. (Grazi said that “pikuach” should in fact be the technical term, referring to observation rather than certification.)

However, a fertility supervisor is not there just to prevent mistakes, said Rabbi Elan Segelman, Rabbinic Advisor at Puah Institute, an organization that helps Jewish couples with reproductive issues have healthy Jewish babies. “It’s to establish Jewish lineage. You need ‘yedia brurah,’ or clear knowledge,” he said, quoting one of the foremost Ashkenazi Jewish law decisors, Rabbi Yosef Shalom Eliashiv. “It’s not an issue of mistrust.”

With more than 100 fertility supervisors around the world – in 2018 they oversaw more than 5,000 treatments – Puah will send mashgichot to places that don’t have any, such as Panama or Argentina. “Just this morning I spoke to someone from Philadelphia,who had to fly to Detroit, and she stayed the week,” Rabbi Segelman said, noting that supervisors will sometimes have to stay in a hotel for Shabbat if a procedure is scheduled for the holy day, or travel three hours for a ten-minute observation. The position, he emphasizes, is paid. “We do not accept volunteer women,” he said. “It is stressful and inconvenient – we wouldn’t want someone taking a lax approach.” Segelman said that supervisors report they’ve prevented mistakes. “Embryologists have told me they appreciate it,” he said.

Some doctors do not believe supervision is necessary. “Every clinic has multiple systems in place to prevent misidentification of sperm, eggs and embryos,” said Dr. Eric Forman, medical and laboratory director of Columbia University’s Fertility Center, noting the “checks and balances” include two lab embryologists verifying any the transfer of tissue. “I think it’s one of the most important things we do,” he said.

Indeed, fertility patients always see the lab specimen and double check the label to ensure it is their own.

“I am 100% confident in our system,” said Dr. Forman. “I take it extremely seriously and cannot afford to have a single mistake.” Although he thinks IVF supervisors are “redundant,” he said, “If this is what they need to do, we want to help people have children.”

Some leading rabbis agree. “I have a lot of confidence in the medical profession,” said Rabbi Moshe Tendler, a leading expert on medical ethics and Jewish law and the author of Practical Medical Halachah, a textbook of Jewish responsa to medical issues. “The fact that there was an unusual case doesn’t mean anything more than people are humans and people are mistakes. Whether that mistake is an adequate mistake to require [a fertility supervisor] to put her initials on everything – that’s highly questionable.”

“Kara” also considered using an IVF supervisor for treatment. “I thought about asking my rabbi but I decided not to,” the modern Orthodox media consultant told the Forward. This was after her fertility doctor at a major New York hospital dissuaded her from it.“We don’t make mistakes here,” he told her.

Amy Klein is the author of The Trying Game: How to Get Pregnant and Get Through Fertility Treatment Without Losing Your Mind. (Ballantine, 2020).