I Stood Up Against LGBT-Hate In My High School Yeshiva. All Straight People Should. 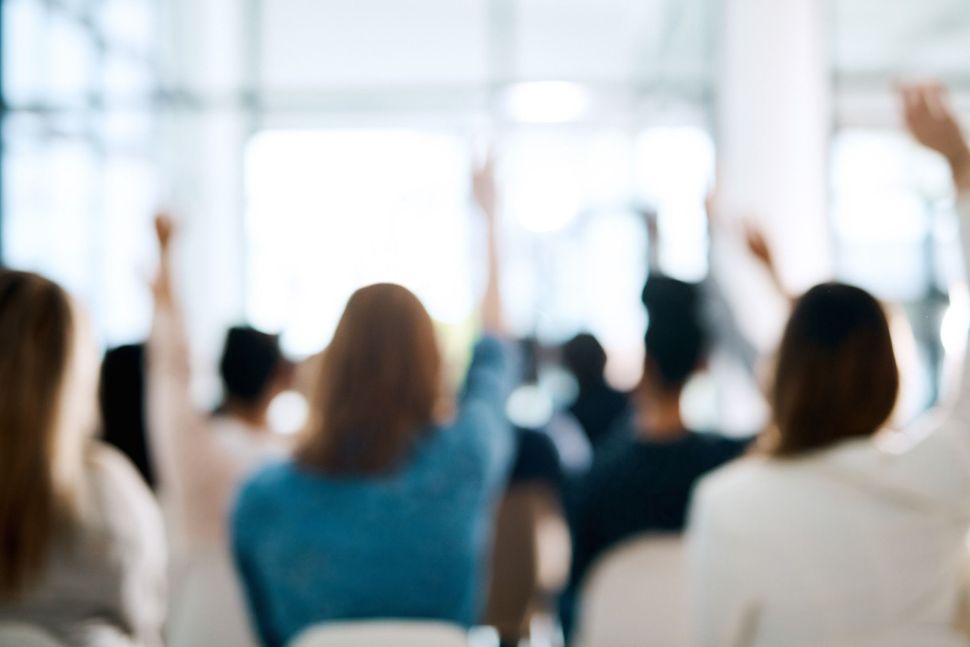 But I can recall, in vivid detail, the words she used.

“Being gay is like having a bad temper,” she brazenly declared to a room full of teenagers. “It’s just something you have to learn to control.” She then marched through what was clearly a well-rehearsed speech about her struggle to control her anger and to, b’ezrat Hashem, avoid losing her temper.

“Homosexual urges are the same thing,” she proclaimed. “Just as my temper must be overcome, so too feelings of homosexuality must be pushed away to avoid sin.”

Though I don’t happen to identify as LGTBQ, I was absolutely horrified. And so, as passionate sixteen-year-olds are wont to do, I exploded. I shouted at my teacher about how she was wrong, and horrible, and cruel, and how statistically speaking, at least two of the people in our classroom of twenty were homosexual.

I shouted that she had some nerve to tell my classmates that they shouldn’t be with whoever they loved, man or woman, and that if she thought being gay is like having a crappy personality trait, then I knew precisely where she could stick her chumash.

Needless to say, I was thrown from the room and sent to the principal. Perhaps due to his wariness to engage with the issue, however, nothing ever came of the incident.

Many years later, I ran into a classmate who had been sitting in the room when I shouted at this teacher.

Unprompted, he reminded me of the altercation. He confessed that he also recalled the teacher’s words clearly, and even more distinctly, he remembered my explosive response. To my shock, he then thanked me for my outburst.

Apparently, this classmate secretly identified as LGBTQ when we were in high school, and felt badly about it. Understandably, he dreaded anytime a religious figure at the school discussed sexuality, because inevitably, the discussion would fan the flames of self-doubt and loneliness he fought every day.

However, according to my classmate, watching a peer push back against the hateful rhetoric of our teacher made him feel less alone. It reassured him to hear a fellow Jew loudly reject the suggestion that God has a problem with gay love. It gave him hope that, although not everyone in our community would accept him if he came out, perhaps not everyone would reject him, either.

Recently, Israel’s education minister expressed support for “gay conversion therapy.” Jerusalem’s Chief Sephardic Rabbi claimed that a gay person cannot be religious because “with their bodies, they sin against the Jewish people.” And a sixteen-year-old LGBTQ boy was stabbed by relatives outside a shelter in Tel Aviv in what police say was an act motivated by his family’s disapproval of his sexual orientation.

In the United States, the chief editor of the Jewish Press made news by posting inflammatory, anti-gay sentiments on social media. Organizations like Eshel and Keshet are still a necessary source of opposition to the anti-gay sentiments in innumerable Jewish institutions, including schools. In light of this unfortunate status quo, the memory of my verbal altercation with this teacher has, at l east for me, taken on new meaning. There is much to be said about the steps the Jewish community has taken to become more inclusive, welcoming, and accepting of LGBTQ individuals. We must commend and continue to encourage that progressive movement.

However, in a time when American leadership is attacking the LGTBQ community with hateful rhetoric and discriminatory policies, acceptance of LGBTQ individuals is declining among young people, and most appallingly, only five percent of LGBTQ youth in the United States believe that their teachers are supportive of LGBTQ issues, I can’t help but worry that these youngsters are in perpetual danger.

They are in danger of depression, and suicide, and hate crimes. Many face potential rejection from family members, isolation, and homelessness, all because they love the “wrong” gender.

And if a young person happens to be LGBTQ and Orthodox, they face an additional problem.

Numerous authority figures in the Jewish community insist that young people must choose between living an authentic LGBTQ life or living in the community of faith they know and love. These supposed religious leaders assert that a person cannot be both Jewish and queer, because the two are inconsistent.

So what can we, the allies and supporters of these young people, do to help?

Sadly, we cannot change the minds of every person who chooses judgment over menschlichtkeit. Leading a person from self-righteous darkness to open-hearted light is rarely an easy endeavor, particularly when the words of the Torah are so easily twisted in favor of condemnation. (And certainly, yelling like a hormonal teenager is unhelpful; as I’ve discovered, raised voices are the best way to ensure your perspective goes unheard.)

That said, I believe that we can learn a lesson from my altercation with that high school teacher. And it is: we must speak up.

No matter who we are, no matter where we speak, and even if we doubt that any person in our audience cares to listen or understand, where we see degradation or disparagement of LGBTQ people, we cannot remain silent.

On the internet, in the classroom, at the bimah, and around the dinner table – everywhere our words can be heard, everywhere a young person might be feeling alone, afraid, and confused, we must express our support and alliance with the LGTBQ community.

When you hear a Rabbi, teacher, parent, friend, or stranger say something cruel and demeaning — do not stay quiet. Stand up and push back.
After all, you never know who might be listening. You never know just how badly they need to hear you.

I Stood Up Against LGBT-Hate In My High School Yeshiva. All Straight People Should.