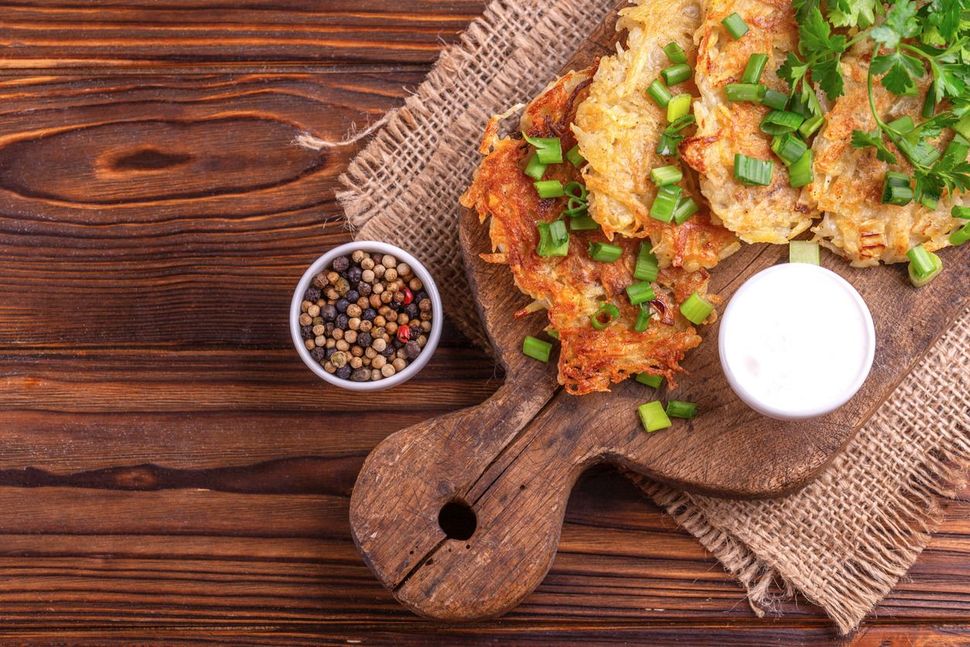 Latkes are yummy, but we have just the thing to take your mind off food this Yom Kippur. Image by iStock

For generations, inherited recipes have allowed American Jews to preserve links to their immigrant ancestors and envision the lives they lived before arriving on these shores. But is grating potatoes for latkes really the iconic Jewish experience we like to think it is? It may be that a more ubiquitous rite of passage is discovering the uninspiring, unappetizing, and downright ahistorical ingredients behind these treasured relics of the old country.

Freelance writer Jamie Keiles (re-)opened this can of chopped liver in a big way when she quipped on Twitter that a typical Jewish recipe can include anything from “french dressing” to “diet black cherry soda.”

Keiles earned a flood of responses from Jewish tweeters eager to share the bizarre ingredient combinations behind their own family favorites. We’ll call the following reverse food porn—because no matter how famished you become as the fast ticks by this Yom Kippur, it’s unlikely that crushed pineapples cooked with mustard will pique your appetite.

Exactly this. My mother’s meatball recipe has cranberry sauce + Heinz chili sauce in it. And it’s the best. Orange marmalade and juice on the turkey while it’s cooking. Onion soup mix and cranberry sauce in brisket. Crushed pineapple and mustard cook with corned beef. Etc.

One user was dismayed to find that bubbe’s kugel is sweetened in packets, not teapsoons.

this is the best reply yet lmao

Others wondered how their ancestors prepared these dishes in the shtetl, where bottles of “Heinz chili sauce” were probably thin on the ground.

I’ll never forget learning the secret to my mom’s brisket was onion soup powder and some difficult to find Heinz chili sauce.

I wonder how they found Heinz chili sauce back in Latvia

But it turns out there’s really nothing new about kvetching over the decline of traditional cooking. One user quoted a 1929 article from your very own Forward, complaining about the rise of shortcuts and salads as “Americanization has penetrated the Jewish kitchen.”

And in fact, these recipes contain their own logic. Many stem from the 1920s, when processed foods had just entered the American market and manufacturers distributed recipes incorporating their own products to working-class and immigrant families. A decade later, as poverty reigned during the Great Depression, processed foods emerged as cheap alternatives to fresh produce or labor-intensive meals. Canned soup and soup powder, which allowed housewives to turn leftover rice and noodles into casseroles, became staples in thrifty American households.

Even when they disappoint our expectations of “ancestral” food, these improbable ingredients represent the realities and hardships of immigrant life and our ancestors’ resolve to preserve old traditions even as they built new lives. On Yom Kippur, a day of reflection, it’s fitting to recognize what our food tells us about being Jewish in America.

But when sunset rolls around I’ll be willing to eat any and all brisket—no matter what condiments are lurking inside.