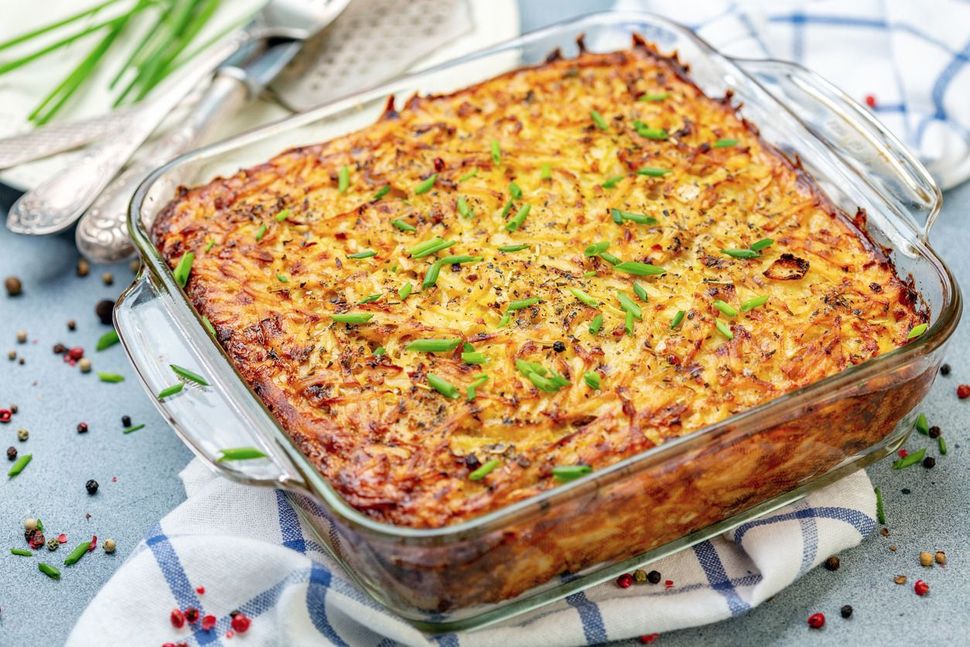 OK, so maybe it’s not venerable, and maybe it’s not totally Jewish. But International Pasta Day is real, it’s here, and we at the Forward are eager to observe it. And what better way to celebrate than with kugel, the most iconic Jewish pasta dish? Stay in for dinner tonight with our roundup of sweet and savory kugels to suit every palette. Chag sameach!

Molly Yeh’s Apple Cardamom Kugel
On her blog, food influencer Molly Yeh writes about the excitement of introducing new friends to her childhood staple. Her recipe features apples and cardamom, a classic but flavorful take on the dish.

IS A KUGEL A HOTDISH?? my answer is on the blog today, along with this recipe for noodle kugel with cardamom and apples. (and obviously feel free to argue your answer below ??) just in time for the holidays!! ?????? (? @chantell_lauren, ? in partnership with @ourfamilyfoods) #roshhashanah #shanatovah #yomkippur #yomkippurbreakfast #kugel

Jake Cohen’s “OG Back Pocket Pasta” Kugel
For our Twitter-averse readers, “OG” means “old-school”—as in, a great recipe to have on hand for weekday nights and no-hassle dinner parties. This buttery kugel from Jake Cohen at Food 52 doesn’t include any specialty ingredients, but you can add whatever you have on hand, from dried fruit to corn flakes.

Tori Avey’s Chai Noodle Kugel
This fall favorite will tempt even people who think they’re too good for pumpkin spice. Loaded with spices and topped with graham cracker crumbs, it’s the perfect dish for a cozy autumn gathering.

This is the best potato kugel you will ever taste. bit.ly/BestEverPotatoKugel

Popsugar’s Kugel for All Seasons
Chock full of fruit and nuts, this kugel will take you from Thanksgiving to Hanukkah and back again.

Amy Kritzer’s Blueberry Goat Cheese Kugel
Kritzer’s slogan is “This ain’t yo bubbe’s blog,” and this definitely isn’t your bubbe’s kugel. Put aside the cottage cheese and sink into refined flavors and fruit with this decadent recipe.