Here’s Something New: We Called Out Ira Glass and He Thanked Us 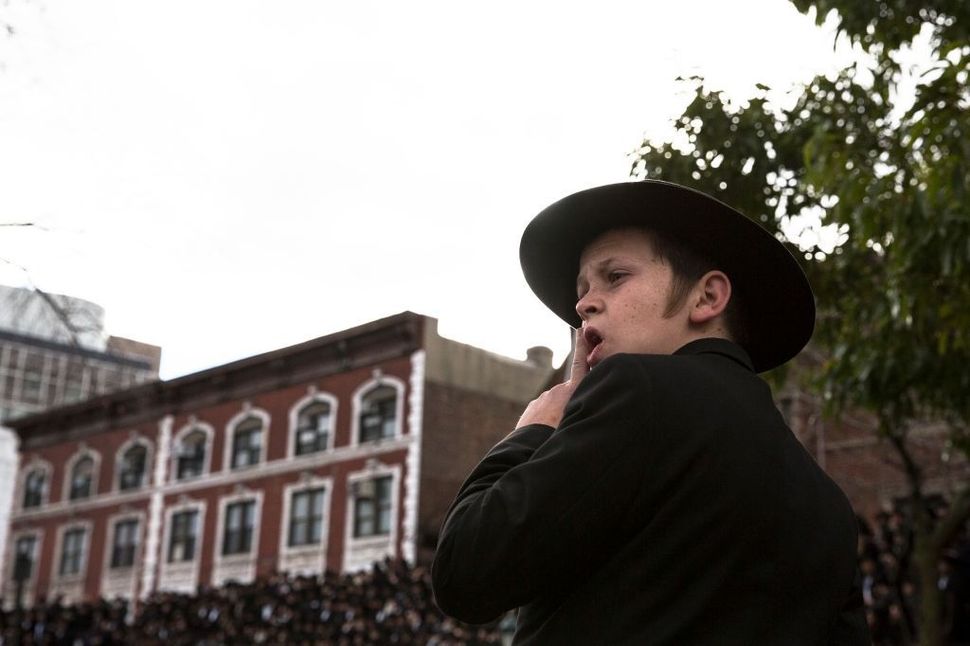 A child watches as Hasidic rabbis prepare to pose a group photo, part of the annual International Conference of Chabad-Lubavitch Emissaries Image by Getty Images

The adrenaline rush that comes with calling someone out online is immediate.

Yes! The writer thinks, rushing to share the link to their latest screed._ I’ve nailed them now!_

But what happens when the person you’re calling out responds kindly, apologizes, and offers to learn more about those he’s unintentionally offended?

I recently edited a piece by Leibel Baumgarten about how Ira Glass the host of ‘This American Life,’ painted Hasidic Jews as aliens. “Walking up to Hasids on the street felt like walking up to people from another planet,” Baumgarten quoted Glass from the episode, describing a parade in Crown Heights, Brooklyn. “People had a general air of hostility or at least suspicion to outsiders like me. They waved me off.”

Baumgarten, a writer living in Crown Heights, pointed out how problematic this language is — and how it represented a broader problem of how Orthodox Jews tend to be portrayed in the mainstream media. “The Jewish community in Crown Heights, as well as Borough Park, Williamsburg and others in Brooklyn, experiences anti-Semitism daily, often violently,” Baumgarten wrote. “The media’s othering of Hasidim no doubt contributes to the view of us as being ‘different’ or ‘special’ and somehow worthy of being attacked.”

I was proud to publish this piece. As an Orthodox Jewish journalist myself, I am hyper-sensitive to this common occurrence — how secular media can parachute into Orthodox communities, often misrepresenting our lives and ways. And I was thrilled to see that the piece was shared widely within Orthodox social media groups — Baumgarten’s piece clearly resonated with fellow frum readers.

A week later, I suddenly saw the piece getting traction again — popping anew into my social feeds. Turns out, Ira Glass, who has several times as many Twitter followers as myself, Baumgarten and The Forward combined, had shared it himself, with this striking note: “This writer at @jdforward is entirely correct and I’m in the wrong here. ‘Othering’ indeed! Good points Leibel Baumgarten. I won’t make this mistake again.”

This writer at @jdforward is entirely correct and I’m in the wrong here. “Othering” indeed! Good points Leibel Baumgarten. I won’t make this mistake again. https://t.co/fQ8JLlLszi

Baumgarten replied, “Thank you for this. I’m honored that you took the time to read and respond, and appreciate your comments. The invitation for shabbos stands!”

What a rarity these days — as Twitter user ‘John Spaulding’ posted:

A carelessly hurtful action, thoughtfully called out…. followed by a humble apology and promise to do better… followed by a gracious, conciliatory response that offers understanding and friendship?!

What is going on here?!?

It’s especially humbling to witness such an exchange in our age of outraged rhetoric and increasing polarization. When families and friendships are torn apart by politics, when ‘call-out’ culture requires us to display our wokeness by litanies of tweets, and when we are rewarded for the best and most flippant dunks on our political opponents.

And this little exchange, amid the storm of the news cycle, made me wonder — how can we get more of this sort of dialogue that Ira and Leibel displayed into our online lives? How do we learn to critique in a way that opens minds instead of shuts them down? How do we learn to receive legitimate criticism — and have the humility to publicly accept it?

Perhaps we might find perspective in the timeless Jewish laws of how to constructively criticize another person. There is a passage in Leviticus that says a person must offer rebuke to one who has done wrong. But the Talmud commentary on the law adds, “Just as it is a mitzvah for a person to say that which will be heeded, so is it a mitzvah for a person not to say that which will not be heeded.” In other words: one should only rebuke those who are receptive. One needn’t bother rebuking someone who will not hear the criticism — it will only harm the relationship further..

We journalists and pundits ought to aspire to be the kinds of thinkers who encourage thoughtful critique of our ideas, who make ourselves receptive to rebuke.

That requires, above all, humility — the acceptance that we can, indeed, be wrong. That our assumptions are just that — assumptions.

Thanks to Leibel’s and Ira’s examples — it’s something I’ll be working on. So, by all means — please @ me with your thoughtful rebukes.

Here’s Something New: We Called Out Ira Glass and He Thanked Us