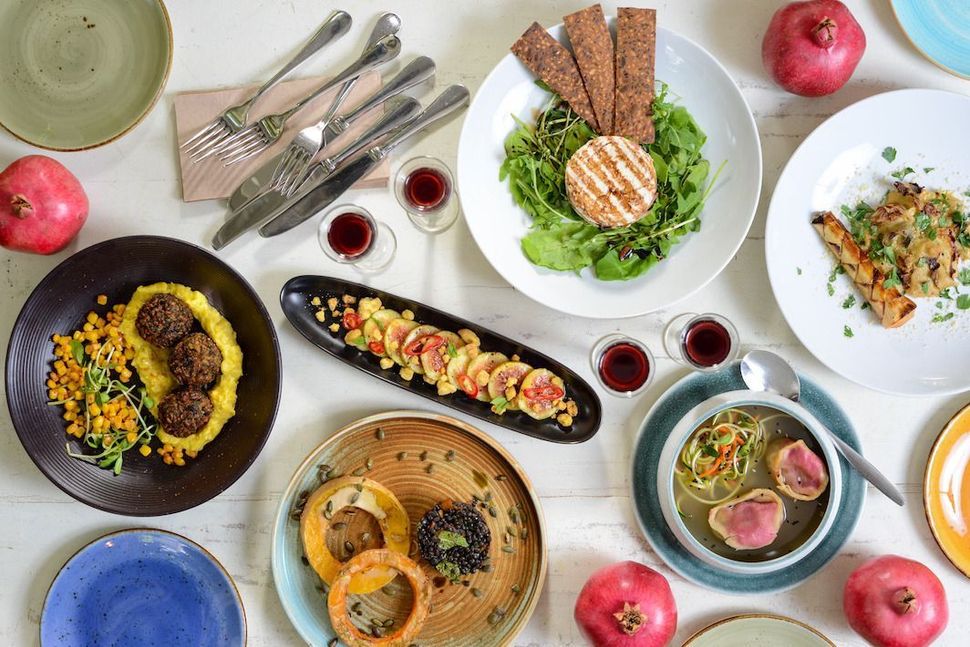 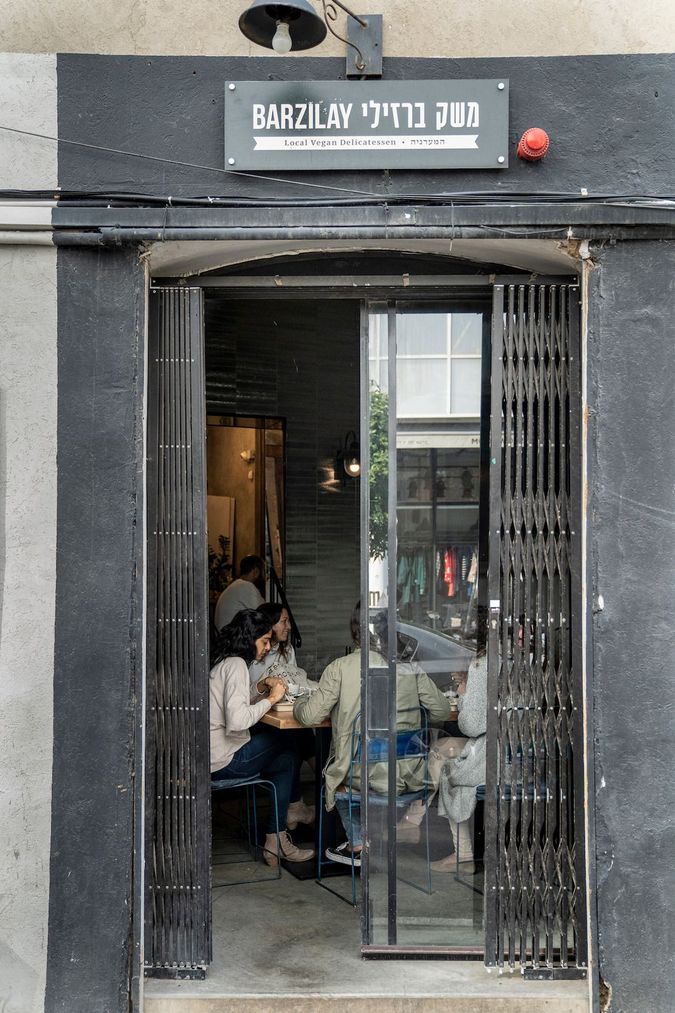 Like many eateries in Tel Aviv, Meshek Barzilay cooks a big pot of dried chickpeas every day. But unlike the many hummusiyot that populate the city, serving fresh batches of homemade hummus, the chefs at vegan restaurant Meshek Barzilay don’t toss the leftover chickpea water. Aquafaba, or the viscous liquid produced from boiling chickpeas, is a familiar plant-based ingredient in the United States and frequently recommended by vegan cooks as an egg replacer. In Tel Aviv, where aquafaba is produced unintentionally on the daily, and where there are an increasing number of vegans, it is still slow to catch on.

Part of the disconnect is such: ‘Miracle water’ (as aquafaba was dubbed in the recently released cookbook, On the Hummus Route) is made in one type of place and the vegans who whip it into meringues and other delicacies are in another. These culinary sectors don’t necessarily emulsify, and lots of the precious ingredient ends up going down the literal drain.

“Hummus restaurants are not the kind of place where you’d expect a meringue for dessert, and restaurants where you would expect meringue are usually not the ones that serve hummus,” explains Nadia Ellis, the first Israeli vegan chef on meal-hosting platform Eatwith, who often uses aquafaba for one of its most popular vegan uses, meringues. “So an extensive day’s production of aquafaba simply goes to waste because of where it is produced.” 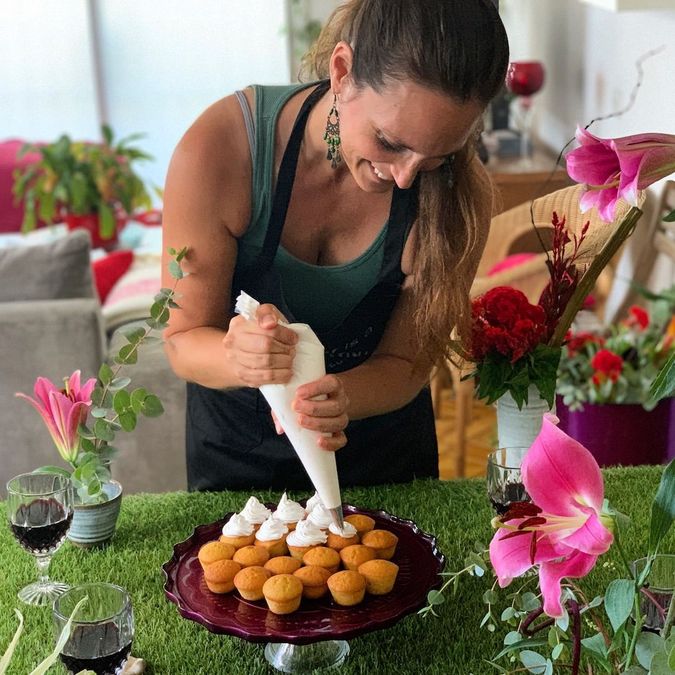 Meshek Barzilay is a rare spot that closes this loop: it both makes hummus and saves the water. A one-pot solution for dinner and dessert. “We use it for all kinds of uses,” says Omri Sibul, a chef at Meshek Barzilay. He reserves the water left over daily from cooking chickpeas to make sauces like artichoke aioli and mayonnaise, vinaigrette, desserts like lemon meringues and cakes, and as a thickener in hummus and stews.

“People are just less familiar with it, it’s a little deterring to use the water that you’ve used to cook your hummus. It seems bizarre to them,” Sibul adds. “You need to know how to use it.”

Aquafaba is a natural byproduct of cooking hummus, but to make it suitable for baking complex desserts (like macarons, for example) the ratio of chickpea to water needs to be just right so that the liquid is thick enough. Vegans making their first attempts at using the ingredient are sometimes advised to use aquafaba from a can of chickpeas, as an indicator of how gelatinous it should be. And when creating aquafaba that is rich enough in protein to whip up (as you would egg whites), sometimes the water needs to be boiled down for more time, even after draining the chickpeas. 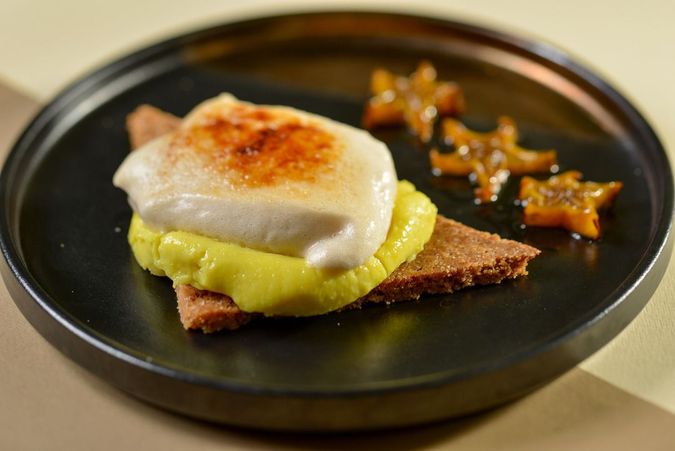 An aquafaba meringue at Meshek Barzilay. Image by Shay Ben

Ori Shavit, a Tel Aviv-based vegan blogger and influencer, admits that she doesn’t use aquafaba much herself because it doesn’t mesh with her approach to finding quick and easy solutions in the kitchen. “Working with aquafaba requires more time and precision, which is probably also part of what deters people from using it,” Shavit notes. “For professionals, it’s an amazing solution.”

In addition to professional bakers, a few bartenders in Tel Aviv have adopted the uncommon broth. “A lot of mixologists have already discovered that aquafaba is an excellent replacement for using egg whites in cocktails and prefer to use it, it’s great,” she says. Vegan restaurant 416 uses it in their Karada cocktail, for example, pairing aquafaba with ginger and lychee syrup, curacao, and aquavit. And trendy oceanfront bar and café Stolero substitutes aquafaba for egg whites in three of its frothy cocktails, infusing it with mixers ranging from tequila to flower-infused gin, and ouzo.

Other establishments and home cooks, meanwhile, are reluctant to add the unconventional elixir to their menus and repertoires. “I think it’s just an issue of a lack of awareness,” Shavit suggests. “It would be interesting to see what would happen if a hummusiya in Tel Aviv offered a liter of aquafaba for a few shekels. Maybe that could open up a new market.” 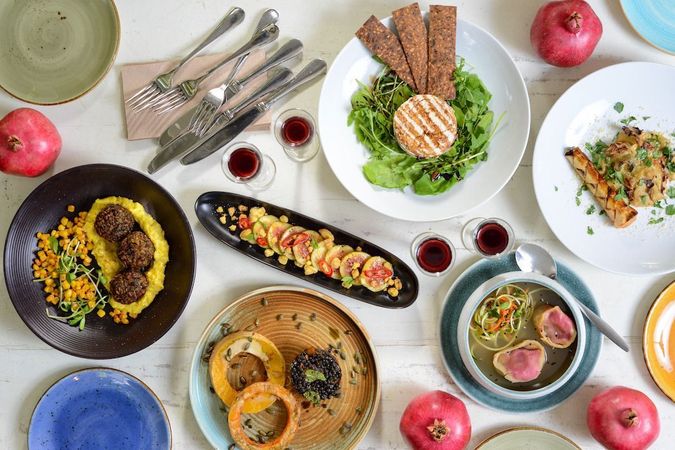