What do you do when you’re harassed for being Jewish on the street? 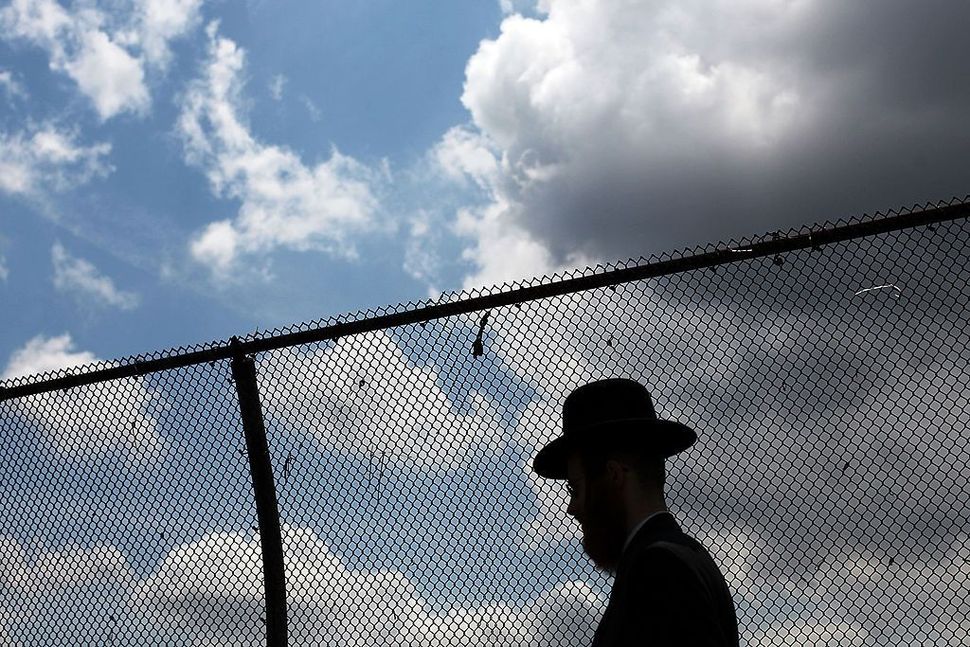 It was just a scream. And yet.

My husband, a rabbi at an Orthodox synagogue on the Upper East Side, was walking home from synagogue on Friday night with our three-year old son. He stopped to say Shabbat Shalom to a young community member, and a man accosted them.

The man — tall, in his 40s, African-American, carrying a tablet — was within arm’s length of our child, screaming profane accusations about “you Jews.” When they kept walking, the man started following them. Eventually, he turned into a local pharmacy.

When they got home, my husband’s face was drained of color as he recounted what happened. I could barely sing “Shalom Aleichem;” I just stood there, holding my son, who is not quite four and was quiet that night, large-eyed. As my husband recited the blessing over the wine — “He who sanctified us” — I thought about what it means to be sanctified. That is, separate. Other.

After dinner, as I was putting my son to bed, he told me: “I don’t want to go to shul tomorrow. I’m scared of the bad man.”

I had, of course, expected this, in some deep, maternal gut. Amid the uptick in anti-Semitic incidents across the New York area last year, I found myself putting a hat or a hood over our son’s yarmulke when outdoors. I know people think we should all take pride in our Jewish identity, but I’m a daughter of Soviet immigrants, I’ve inherited a lot of paranoia as it is, and now I’m a mother, and I’m not interested in risking my child’s safety for the sake of a statement.

He wasn’t wearing a hat to shul on Friday night.

So what does one do about an uncomfortable moment in which one is singled out and harassed for one’s identity on the street, on the subway, in the supermarket?

It was just a scream, right? There was, thankfully, no physical altercation.

But it was in our neighborhood, a few blocks from our shul and our home, so we figured it would be good to report the incident, in case the man made a habit of this kind of harassment. On Sunday morning, my husband went to the local precinct — which has been generously protecting our synagogue — and the officers on duty informed him that this was not a bias incident, it was street harassment.

I decided to share what happened on social media. I figured that these moments of anxiety, of what it means to be a visible Jew in New York in 2020, must be in the public record — if not in official police records, then on Twitter. When I shared the tweet, which had gotten some traction, with the local precinct’s Twitter account, an officer immediately reached out to us for more information, to hear the full story. The officer subsequently encouraged reporting of these incidents, even if there was no physical assault or threats at hand.

I also reported the incident to the Anti-Defamation League, which collects incident reports from news reports and social media in a searchable database on its website. The head of the ADL, Jonathan Greenblatt, said that this tracker is an important supplement to official police logs of anti-Semitic hate crimes because, “it provides a much more accurate barometric reading of the mood toward Jews — and, not unsurprisingly, the mood of Jews because we are aware of the rise in uncomfortable moments like the one that you described on Twitter.”

Greenblatt has an important point: These incidents ought to be recorded in order to assess, somehow, the fears of a community. When I posted about the incident on Instagram, where most of my followers are Orthodox like me, I received about a dozen messages from women who described similar situations — ones that they have not reported, and that will never get reported, because they are merely “uncomfortable,” not criminal.

I called Deborah Lauter, who heads New York City’s Office for the Prevention of Hate Crimes, to ask what one should do after being harassed on the street. I was gratified to learn that the New York Police Department plans to soon — she said “within the next few months” — start including such non-criminal bias incidents in their CompStat system.

“The fortunate and unfortunate thing is that you have a right to be a bigot,” she told me. “But you don’t have the right to harass people. The fact that he was pursuing your husband and child — that needed to be reported.” Like Greenblatt, Lauter encouraged reporting incidents both to law enforcement and to the ADL.

So, if you find yourself in such a situation: Tell the local police. Tell community organizations devoted to keeping independent records. And — as a journalist, I believe in this strongly — tell the world, in your own voice, on social media. That is, don’t let that incident live in some bureaucratic spreadsheet alone: Post about it. Share your story. Let it be known that hate is alive on American streets.

But while the city sorts out how exactly to catalog the intimidation many visibly religious Jews may feel while going about our daily lives — I am a mother trying to figure out how to support my not-yet-4-year-old son, who has evidently already figured out that there is a connection between his Judaism and the behavior of the “bad man.”

He’s had trouble going to school the last few days, the principal told me. This afternoon, I got on the phone with the school psychologist about how to handle this; she taught me to validate his emotions, and to emphasize that he is safe.

We’ve talked about this incident in the larger context of Jewish history, drawing on his knowledge of the Purim and Hanukkah stories, where sometimes people aren’t nice to us because of who we are — but we must always remember who protects us, who keeps us safe.

I’ve gotten some good advice from friends, congregants and Twitter followers. Some suggested picture books that deal with identity and difference, like ‘Most People’ by Michael Leannah and ‘Chick Chak Shabbat’ by Mara Rockliff. Others suggested focusing on the helpers, in the words of Mr. Rogers, making lists of the people in our lives who protect us and help our community.

This morning, my son told me he was afraid to go outside. “My favorite place is home,” he said, hugging me. I understood his fear — and I was troubled that, at so young an age, he might feel stress associated with being Jewish in public. In that moment, I just held him, silently.

And then, I put a winter hat on him and sent him off to school.

What do you do when you’re harassed for being Jewish on the street?