The RBG exhibit was daunting, not inspiring — until I did some soul-searching 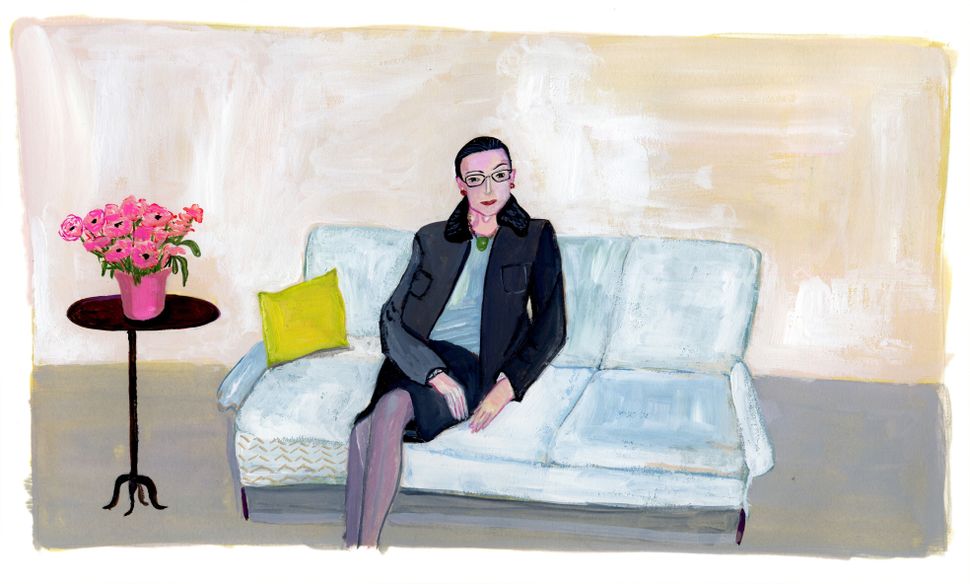 Ruth Bader Ginsburg, as painted by Maira Kalman. Image by Courtesy of Notorious RBG: The Exhibit

As a left-leaning, Jewish, female millennial, I am the target demographic for the Notorious RBG exhibit, which offers visitors a walk through the beloved Supreme Court Justice’s formidable life. Attending the exhibit, however, I realized that she and I have depressingly little in common.

I know that our world is wracked by injustice and we need more RBGs, but my life does not merit an exhibit. My high school journal entries should not be projected on a gallery wall; they dissected hopeless crushes instead of the 14th amendment. Even if there was an exhibit, it would not be well attended. (My parents would come.)

What RBG for us regular people? What if our work is shoddy on only two hours sleep? What if you don’t understand the U.S. healthcare system as much as you should? How do we tread an ethical path to which RBG would not dissent?

After runs at the Skirball Cultural Center in Los Angeles and the National Museum of American Jewish History in Philadelphia, the Notorious RBG exhibit opened at the Illinois Holocaust Museum on Sunday, Feb. 9. I attended alongside 400 of RBG’s biggest Chicagoland fans, and felt underdressed sans RBG graphic tee.

Bader Ginsburg’s “Notorious RBG” persona — which gives her legal chops and intellectual might the edge of rapper Notorious B.I.G. — emerged following her dissent to Shelby County vs. Holder, a case that challenged the Voting Rights Act in 2013. Those words inspired then-law student Shana Knizhnik to create The Notorious RBG Tumblr page — equal parts meme and tribute.

The Tumblr and the monitor supercharged RBG’s celebrity. The RBG-curious explore and celebrate her across a slew of media: 700-page biographies, glossy Hollywood films, picture books, bobblehead dolls. She is a cult figure, especially among people like me, who exalt her feminist bona fides and awe-inspiring work ethic.

But I am also 24 and find myself constantly saying “I don’t know what to do!” aloud, to no one in particular. She is 86, but even at my age, she seemed to have known. At 24, she was at Harvard Law School, setting trails ablaze. I graduated college and pursued non-profit work, only to reroute after feeling inadequate, thinking my job could be better done by someone with different life experience.

She seems unburdened by life’s minutiae, of which I am a Professor Emeritus. I get distracted. I find myself caring about who Ashton Kutcher dated in 2008 and think too much about what I’m having for lunch. Potential career paths flit in and out of my brain like moth’s wings. I change course when I’m faced with rejection. To achieve focus like RBG’s, I would need some serious mental renovation.

When I saw “On the Basis of Sex,” I remember thinking: “Oh. I should just do that.” I could see myself, ponytail tied by a silk scarf, in the ACLU war room doing what had to be done. I could stay up ‘til 2 a.m. triple-checking my oral arguments, the cogs of my brain turning at a rapid clip.

But after washing the smell of popcorn butter from my fingers, I realized my error. We can’t blindly beeline toward the professional accomplishments of our heroes. That would create an intimidatingly long task list. RBG is great because of her legal career, her vision of equal rights, the personal and professional trail she blazed. But the way those achievements overlap and interact can induce paralysis.

It’s her humanity, the times she feels regular, that have more potential to inspire me.

“What’s great about the exhibit is that it’s light, so it pulls people in,” says the museum’s Chief Curator of Collections and Exhibitions, Arielle Weininger. “Then when you’re in, you see the incredible hard work, and the fights involved, but [the exhibit] is approachable.”

Footage from the Ginsburgs’ honeymoon and a letter that an ailing Martin sent Ruth from the hospital are more than fodder for hopeless romantics. They are tools for understanding how an equal partnership in RBG’s personal life propelled her to fight for equal rights on a grander scale. Martin’s whisk and mortar and pestle whisper loudly from within their glass cases. Bader Ginsburg’s life is defined by monumental court cases and prestigious nominations, none of which would have been possible without the little things, like dinner on the table. She was not a good cook, or even a cook at all. Hey, nobody can do everything. Not even RBG, and not me.

I find myself stumbling through the world’s ethical terrain, at times struggling to act at all, much less do the right thing. These are daunting, dizzying times. But to echo Irin and Shana, if RBG can do it — meaning something, not everything — so can we. RBG’s sense of “the right thing to do” is not supernatural or godlike. It flowed from deliberate life choices bolstered by a disciplined work ethic. I could aspire to be a meme-worthy supreme court justice, but that path has been tread. I will not be RBG, or even RBG-lite, but I can be RBG-like on the small stage of my everyday life. She is a gold standard role model, but she tasks us with some translation work. How can I live a life that’s different but in harmony with RBG’s? I cannot pen a scathing dissent, but I can phonebank for the 2020 election. I can choose my words wisely and with force and find common ground with my adversaries (ugh). I can take myself seriously.

As the assault on this country’s democratic institutions intensifies, so does our need for standard-bearers. At the Illinois Holocaust Museum, tickets to the opening program of Notorious RBG: the Exhibit sold out three weeks in advance.

Notorious RBG: The Life and Times of Ruth Bader Ginsburg is open February 9 – August 16, 2020 at the Illinois Holocaust Museum.

Corrections: A previous version of this article referred to the National Museum of American Jewish History as the National Museum of Jewish History. It also stated that 200 people attended the opening program; in fact, 400 attended. And it claimed that tickets to Notorious RBG: The Exhibit were sold out for three weeks; in fact, admission is free, but tickets to the opening event sold out three weeks in advance.

Amy Balmuth is a Chicago-based writer. Find her in real life riding the CTA, or online at www.amybalmuth.com.

The RBG exhibit was daunting, not inspiring — until I did some soul-searching