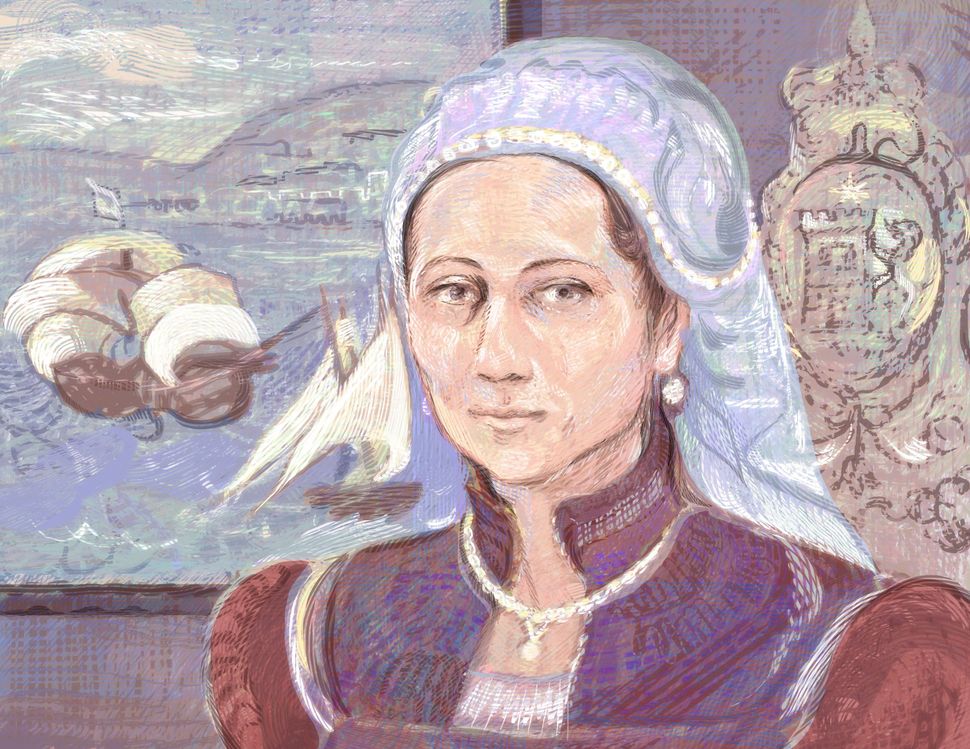 Who she was: Dona Gracia Nasi Mendes

Where and when: 16th century, Portugal, Belgium, Italy, and the Ottoman Empire

What we know: Meet the woman whose fortune shook kings and brought the rebirth of Iberian Jewry— Dona Gracia Nasi. Mendes was born in 1501 into an elite Jewish family in Portugal, who hoped to wait out the Inquisition by living outwardly as Christians. When she reached maturity, Mendes married the phenomenally wealthy and powerful Francisco Mendes. Mendes, like her, was a discreet Jew, and was considered the leader of their underground community. His family had a virtual monopoly on the spice, precious metals and stones trade with their fleet of merchant ships, and were so rich one Portuguese king after another was indebted to Francisco Mendes and his two brothers to pay for Portugal’s wars. Mendes utilized his fortune and various loans to profligate monarchs to persuade or, if necessary, outright bribe royals and Vatican officials to hold off the Inquisition and protect his community. When he died, those weighty responsibilities fell to his young widow. She moved to Belgium and reestablished the family business, as well as their network of charities and petitioning for Jews far less privileged than the Mendes who were facing religious persecution and periodic expulsions. In short, she was the leader of a de-facto Underground Railroad for Iberian Jews fleeing towards tolerance. Her love for her people was an open secret, much to the loathing of Christian monarchs and Church officials, who attempted to persecute her for practicing as Jew. Mendes was undeterred; she once threatened to hit a priest over the head with a chair if he did not leave her presence and take his threats with him. But she was not naive, and once again fled to the relatively enlightened ghettos of Italy. There, she became a patroness of Jewish printing presses and rabbis, offering tools of spiritual resistance against despair and oppression. But with the Inquisition at her heels, she left Christian Europe entirely for the diversity of the Muslim-ruled Ottoman Empire, along with thousands of other Jewish refugees. There, she founded dozens of schools, synagogues, scholars and printing presses, all while running a soup kitchen from her home.

She remained a formidable merchant, participating in a Jewish boycott of the Italian city-state of Ancona in response to its jailing of two dozen Jews, and damaged the city’s reputation as a trade center for years. She was, outside of the wives of the Sultan and women of the court, the only woman to appear on Turkish tax records from that period.

When she died, the poet Longo described the collective mourning that accompanied her death as a grief as profound as Tisha B’Av, the day dedicated to remembering the destruction of the Temple.

What she thought: Nasi was directly responsible for protecting, sheltering, and smuggling thousands of Jews to safety and freedom, and coaxing Jewish culture and faith to flourish anew through her extensive charitable commitments. Her direct involvement and power, as a woman, were unusual for her time, but she proved herself so masterful a leader her sex became a secondary matter, even an asset.

What else: When moving to the Ottoman Empire, Mendes formally changed her name from Mendes to Nasi. The symbolism was profound: “Nasi” was an ancient Jewish title, bestowed upon tribal representatives and heads of powerful families, and had connotations of royalty and secular political authority. A nasi would be the communal, political, financial and legal leader, as well as formal representative of the Jews in court. Notably, there is no evidence any other woman has ever held the title, but Mendes was no ordinary woman.