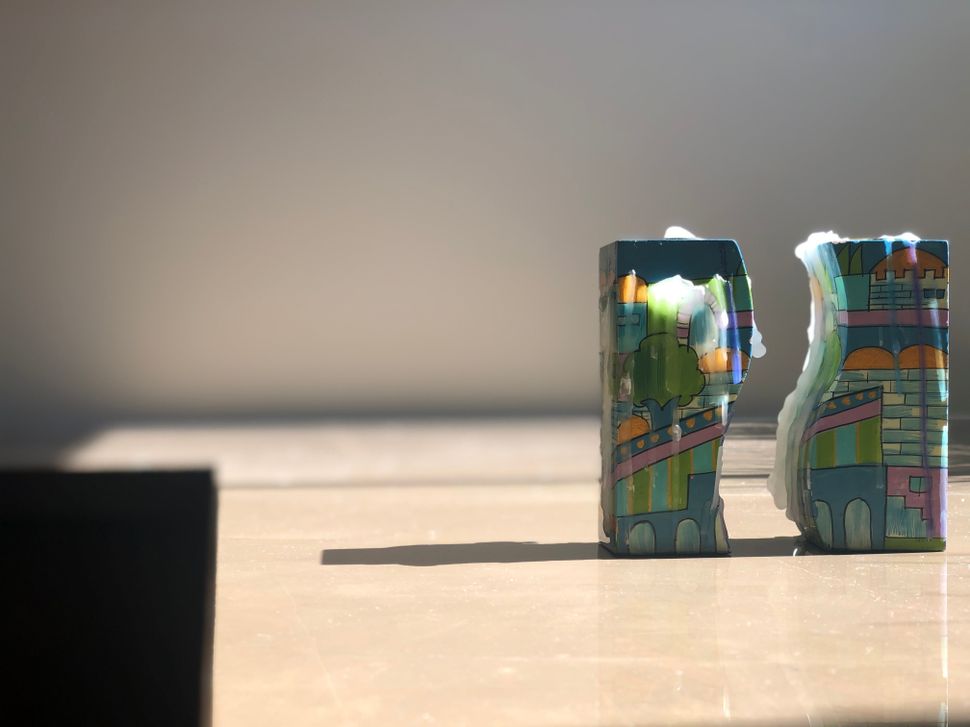 I logged on to Twitter Friday morning and searched “Tribeca Whole Foods” as a kind of Shabbat-host reconnaissance mission. The results looked like a compilation of Depression-era newsreels and post-apocalyptic music videos, photos of long lines at the door and shelf after empty shelf. So I texted my guests-to-be, high-school friends that come over many a Friday night: “I don’t have challah but I have regular bread. The stores are empty.” Someone offered to bring garlic bread, which somehow felt like a more appropriate substitute.

This week, I had sent out my Shabbat-dinner invitation on Monday night, the tipping point of a week that seemed to bend time and space. That following day, the worst-case scenarios for the coronavirus outbreak ballooned to as many as 1.7 million deaths nationwide. Widespread school closures. Food insecurity for families that depend on school meals. A financial crash and sluggish recovery, with all of its implications. The postponement of nearly every major sports season. And yes, a run on groceries.

How is coronavirus impacting your Shabbat and Jewish life? We want to hear from you.

After moving away for college and spending a few post-grad years in Boston, I returned to New York last fall, moved back in with Mom and Dad and started hosting Shabbat dinner. My parents have a large dinner table and a gleaming stove, I love to cook and my friends love to party.

They come from apartments in the East Village, Fort Greene and Clinton Hill. Most are Jews — of the secular variety — and those who are not are fluent in the culture from having grown up in Westchester County, where some 17% of the population is Jewish. Very few of us identify as straight.

There is a lot of black clothing and almost no makeup at the table. There are two eyebrow piercings. There is one vegetarian. Two can sing the summer camp version of Birkat Hamazon which includes rhyming “le’olam va’ed” with “drop dead.”

These are the people I gushed to after my first kiss, and these are the degenerates with whom I smoked cigarettes in the parking lot of a lumberyard. Now most of us have jobs, and we have Shabbat dinner.

Normally, shopping for these dinners is one of my favorite parts of the week. I bring my big empty Jansport backpack down to Whole Foods on Chambers Street and steel myself against an oncoming tide of children in strollers and men in Patagonia vests coming out of CitiBank.

I palm lemons and squeeze tomatoes with the intensity of a medical examiner, peer at loaves of challah as if looking through a microscope. I sniff random essential oils. I impulsively buy black-bean tortilla chips. Then, backpack full, I head home, put on the jazz station WGBO and pour myself a glass of wine. I cook and await the arrival of my deeply loved and very tardy mid-twenties Shabbat dinner crew.

This week, I agonized all of Friday over whether to forge a trip to the grocery store. I toyed with the possibility of baking challah but procrastinated until it was too late. I drank too much green tea and felt jittery. At end of the day, my friends were still game to come, so I decided to force myself out the door. Maybe there was still challah.

I dressed way too warmly for the unseasonable sunshine, and stuffed earbuds in, blasting “I’m Into Something Good” by Herman’s Hermits at a volume normally reserved for the torture chambers of Guantanamo Bay. The elevator descended to the first floor. I readied myself for the ghost town.

But New York City was doing what it does best: acting like nothing was wrong. Moms and strollers barrelled towards me. I even saw a few Patagonia vests. Whole Foods did not have a line out the door, and while most of the shelves were indeed empty, people eyed chicken livers as a possible dinner protein as if that were typical.

Alas, there was no challah, but I managed to grab an assortment of vegetables, almost all yellow (do people hate yellow peppers that much?). I even impulse-bought a container of rugelach. Why not?

As I walked back home, I passed a boy and a mother sitting next to each other on a park bench, running their hands up and down the seats like house cats, the boy hugging her and stuffing his hands in his mouth. I couldn’t help but laugh.

When my friends arrived, we all bumped elbows instead of hugging and accused each other of having coronavirus at the slightest cough.

“Spring is definitely cancelled,” one person said as I lifted the cork on a bottle of wine. “But I think summer is still on.”

We talked about New Rochelle, the Westchester County city that is the epicenter of the virus in New York State and was the first place in the nation to declare an official containment zone; it’s right near where we all grew up, where one guest went mini-golfing drunk in high school, where I took an ice-skating clinic in elementary school.

And then, the conversation rotated on its axis as we ate pasta and sauce and a quinoa salad with yellow vegetables.

One friend had gotten into graduate school in California and was deciding whether or not she wanted to go. Another was seeing someone he really liked, and things were getting serious. Somebody’s ex-boyfriend had gotten engaged. Someone we knew from high school was working in finance despite being, we all decided, not very smart.

After dinner, we watched an episode of “Love Is Blind” and screamed when a couple got engaged after five days of knowing each other. We took mugs of hot tea up to the roof and fought over who would DJ on the crappy Bluetooth speaker. One concession: we rolled two joints instead of one and split up our group to smoke them, so we’d pass saliva on to fewer people.

Before dinner, I had paused the jazz on the radio to say the blessings. I lit the candles and covered my eyes, and I did not think about the potential danger of touching my face. I sipped the wine after making kiddush. And after HaMotzi over the garlic bread (as God intended), we pulled it apart with our freshly washed hands, passing it around the table in our “cathedral in time,” as Rabbi Abraham Joshua Heschel called the sanctuary created by the ritual.

Social distancing would have to wait.