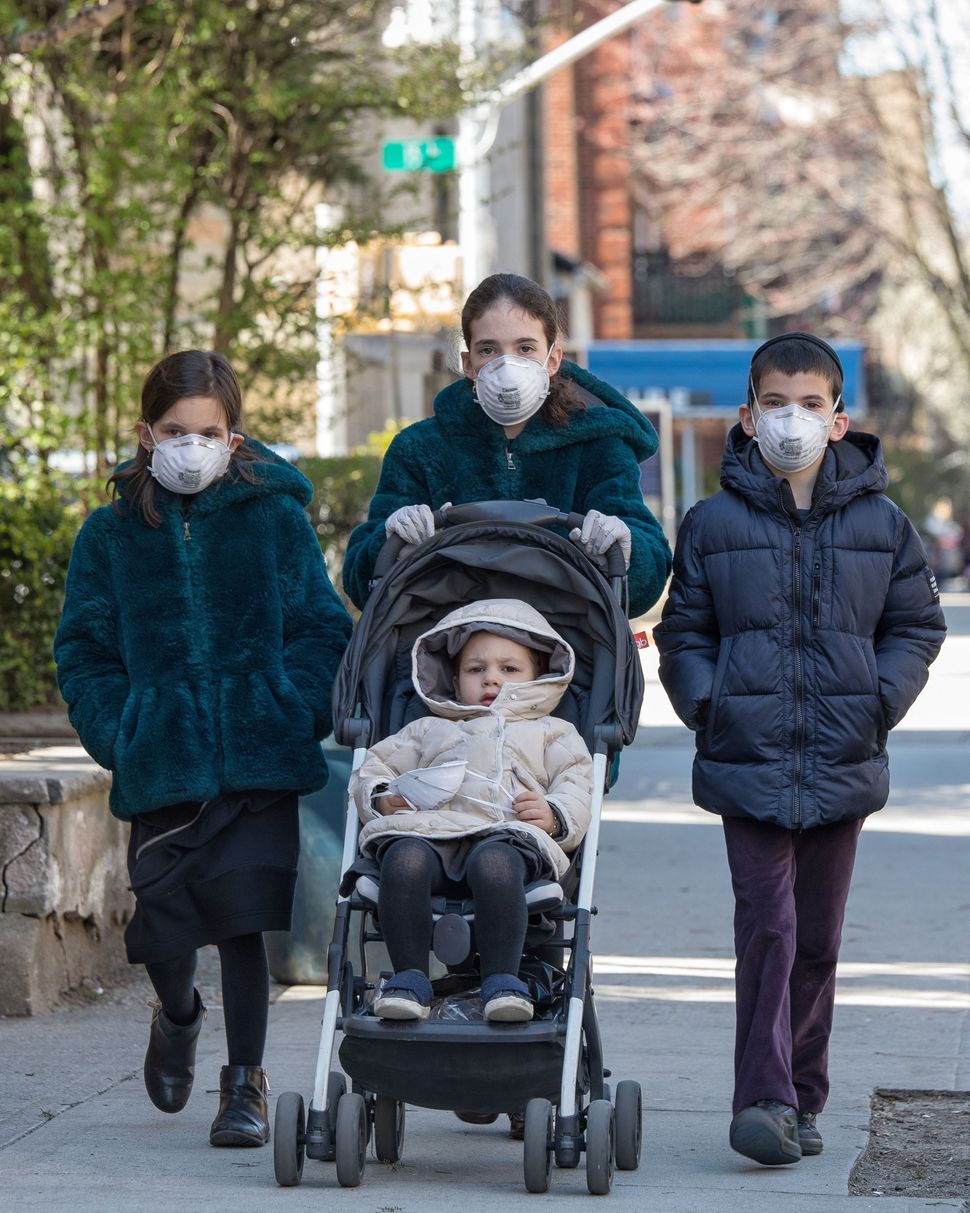 Children going for a walk to get fresh air — to let mama cook in peace. Image by Avi Kaye/Hasidim in USA

A year ago, I profiled Avi Kaye, an Orthodox street photographer who mostly works in Boro Park and Williamsburg, and who posts his photographs on an Instagram account, ‘Hasidim in USA.’.

As COVID-19 hit the Orthodox community, I noticed that Kaye was posting photographs of Orthodox Jews wearing face masks on Instagram — he was driving around Brooklyn, and walking around using hip photography, trying to capture this moment. So I reached out to him and asked him to take us along on a walk in Boro Park, as communities rush to prepare for Passover in the bizarre silence of a pandemic.

“The whole atmosphere in our communities is surreal right now,” Kaye told me. “You walk down the main avenues, and it’s dead — on erev Pesach! Very few stores are open in Boro Park now, mostly essentials – food, and hardware stores.” 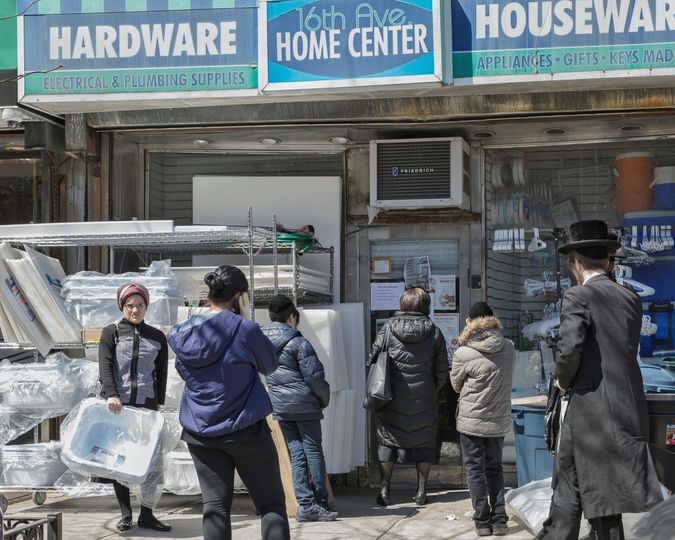 This hardware store was ensuring people stood far apart, and only allowed a few customers in at a time. Image by Avi Kaye 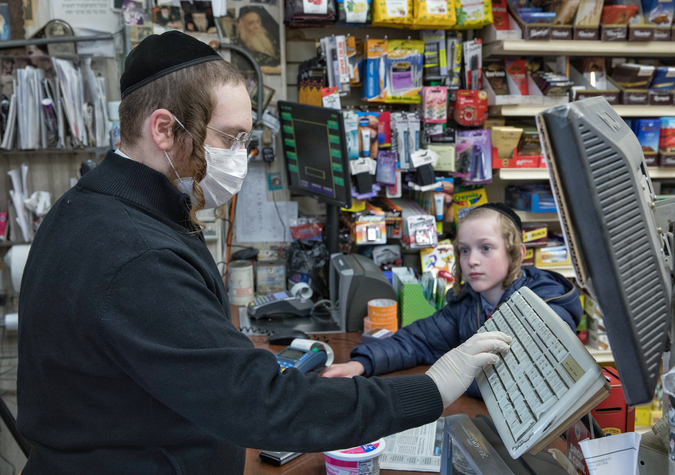 Picking up treats on 16th Avenue. Image by Avi Kaye

“I know some people are not listening to the rules, you see it in the media,” Kaye said. “It’s unfortunate that there are these extremists, those who don’t believe in the system. But in general, the streets of Boro Park are really empty for this time of the year. The majority of people are really indoors. I followed a truck that was playing festive music for hours in the streets, to uplift people – and I could see, most families were staying home, waving from their windows and porches.” 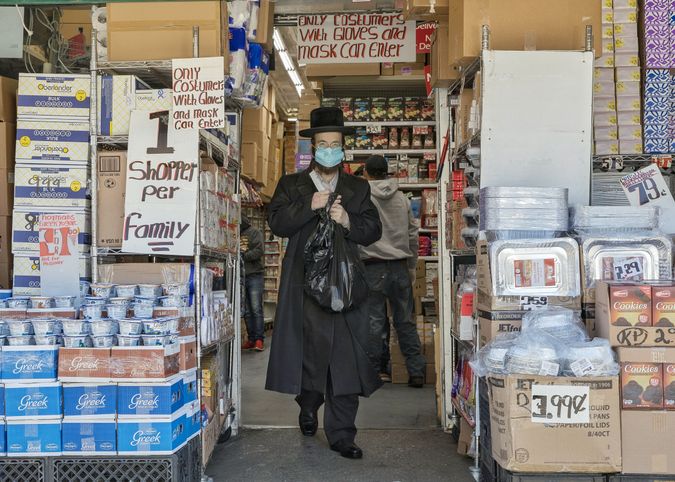 This grocery only allowed people with a mask and gloves on, and limited each family to one shopper. Image by Avi Kaye Masks for sale in Boro Park Image by Avi Kaye

Kaye said that most people he saw in the streets were not wearing masks. “It was hard for me to find people wearing masks to photograph,” Kaye said. “I had to walk around a lot for these pictures. In Boro Park, they just don’t have access to masks. Perhaps local community organizations like Hatzalah and Misaskim should have bought masks and handed them out. These boys were selling masks for five dollars a piece, and every car that passed by, stopped and bought two to three masks. There’s just nowhere to buy them here.” 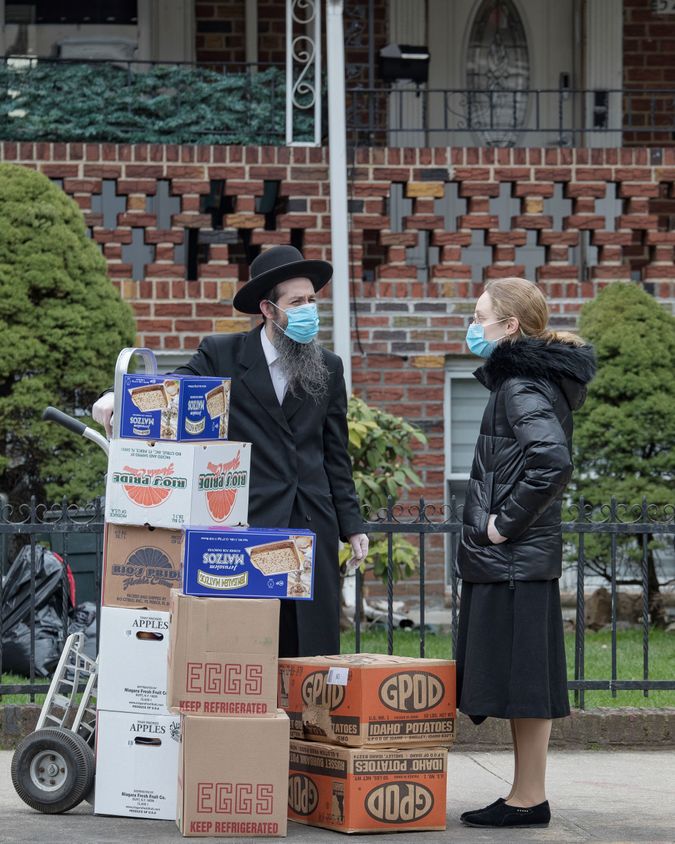 Conversations on a Boro Park street Image by Avi Kaye

A father and daughter pick up food from a Passover charity food distribution center on 19th Avenue. “There’s a lot of these in Boro Park right now,” Kaye explained. “There are many community members who receive assistance this time of the year, especially this year.” 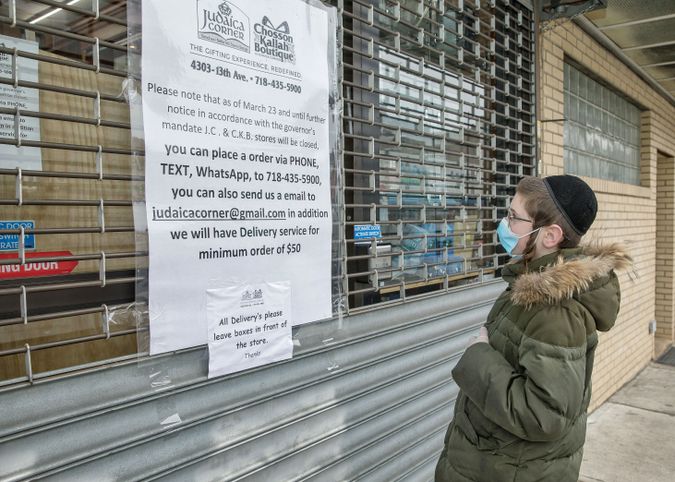 “I was very impressed to see this Judaica store a week before Pesach completely shut.” This store informed customers that it was only taking online and phone orders. This is usually the time everyone is going out to shop for Passover items – buying haggadahs, yarmulkes, tzitzis, kittels. 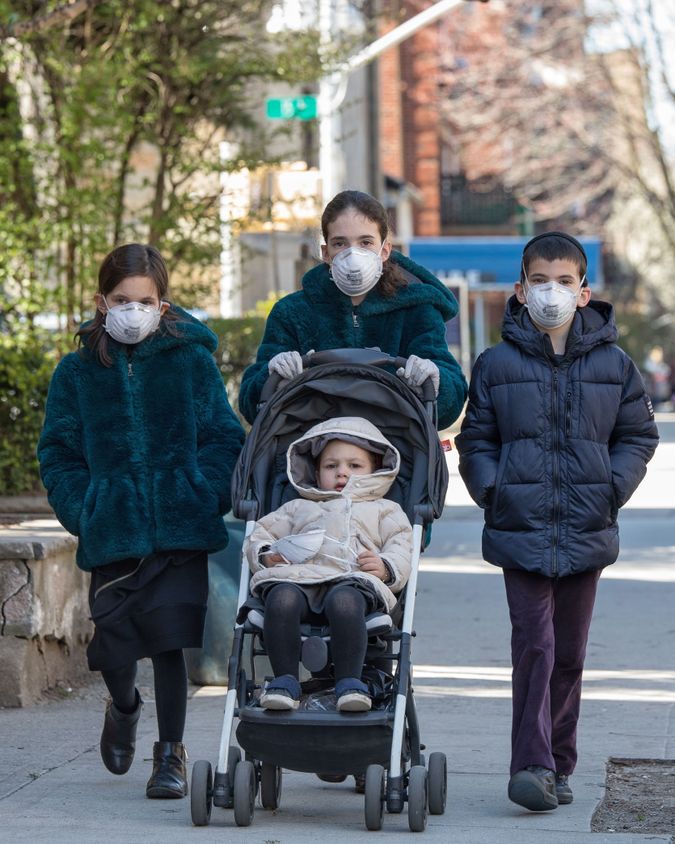 Children going for a walk to get fresh air — to let mama cook in peace. Image by Avi Kaye/Hasidim in USA

“It’s rare to see children wearing masks here,” Kaye said. “I saw so many scenes in which groups of children were walking, and only one of them was wearing a mask. Sometimes you see mothers wearing masks, but the children are not.” 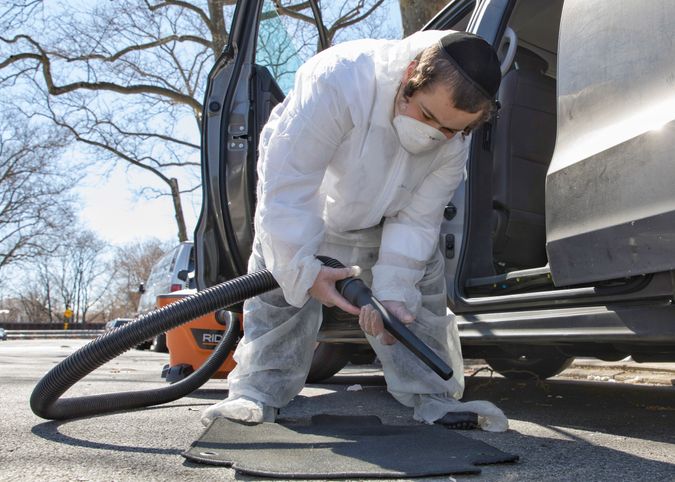 “Usually cleaning the car is exciting – but this time, it’s the oldest brother who got the job. His siblings were watching him from the porch.” 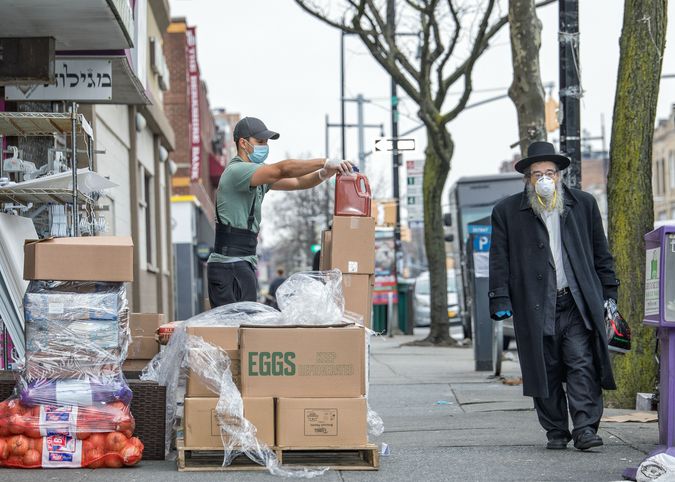 “I’ve seen some elderly walking around, into groceries, without masks and gloves. It’s mind-boggling. I really don’t and can’t understand it. I don’t know what’s wrong with the system. What happened to all the rebbes? Is it a lack of knowledge? I don’t know. I have a lot of questions. Because, at this point, everyone knows someone who’s gone.”