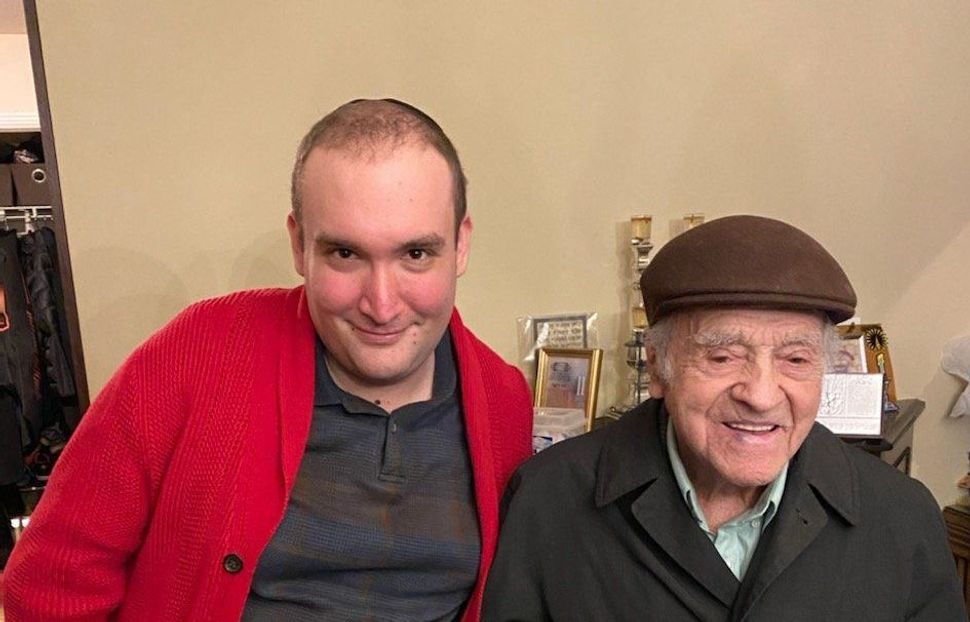 The writer with his grandfather, Morris Silberstein. Image by Courtesy of Abe Silberstein

On May 21, my beloved grandfather, Morris Silberstein, passed away at 100. His favorite activities included carpentry, listening to the opera, and periodically informing the German government he was still alive and that his bank account deposit information was up to date.

As far as I know, he was not infected with the coronavirus that has shaken the world. But coronavirus was the reason I could not visit him for the last two months. It was only due to the kindness of one or two nurses at the rehabilitation center, where he had been confined since suffering a fall in January, that he was able to speak to my father and understand that his family had not abandoned him. He was lucid until the end, but amidst the cacophony of screams from neighboring rooms, it is impossible to know whether he truly understood why we couldn’t be there. Coronavirus may not have been the cause of his death, but it’s the cause of so much of the pain.

I am not certain of all the details of his life. I know he was born in Leipzig in 1920. While still a minor, and sometime before it became close to impossible for most Jews to escape Germany, he somehow left – presumably alone, since I have heard little about my great-grandparents and there is probably a heartbreaking reason for that. How he made it to America is likewise somewhat of a mystery to me. He mentioned in passing that during the war he passed through Turkey and Ireland, but I never inquired further.

I don’t think incuriosity was the reason I didn’t pry for information while he was still here. Whenever we had the chance to spend time together, he was mainly concerned about the present. He wanted to know how I was doing in school, whether my father was alright, and what my plans were for the future.

I was always characteristically vague in response. I did not have the heart to tell him that the American Dream he embodied – becoming a homeowner in New York just a few years after entering the country nearly penniless and with barely a high school education – and passed on to his two children was no longer obtainable. We know better now than to project a false Golden Age onto the past, but still, how do you tell someone who endured and accomplished so much that his grandchildren will in all likelihood be worse off than his children? It would probably be just as heartless as telling my father today that I don’t believe in the afterlife.

We both lived in Brooklyn and I was fortunate to be able to spend more time with him in his last decade than I had ever before. While living at home during college, starting around 2012, I did my best not to schedule classes on Friday so I could visit him with my father before Shabbat. While my grandmother was still alive, we would also visit her at a nearby nursing home. Combined with the Friday visit during my “year of figuring things out” after college, I must have made 200 or so visits during that time. They all blend together in my mind now, but I think I’m better off for having gone each time.

One visit, however, will always stick with me.

When my grandmother passed away in 2018, and my parents flew to Israel for the burial, I visited Morris alone for the first time. Public transportation in New York is wonderful and one of the things I miss most, but it never provided for a simple trip from Midwood to Sunset Park where my grandfather lived, just outside of Borough Park and a few blocks from Maimonides. I would usually go with my father by car, but this wasn’t an option.

This was my own first experience with grief and I did not know what to expect from him. It turned out the wretched hour-long commute on the packed B11, which I would do anything for today, was a much more difficult experience. When I met him in the kitchen, he was more or less himself. I’m sure he was sad, but he wanted to move on. He was 98 and no stranger to loss. He asked if I had been to the opera lately, and within the calm atmosphere he established I had no shame in telling that I had actually been there the night before, for a performance of Parsifal.

He laughed. “Wagner,” he said. “Not exactly my favorite.”