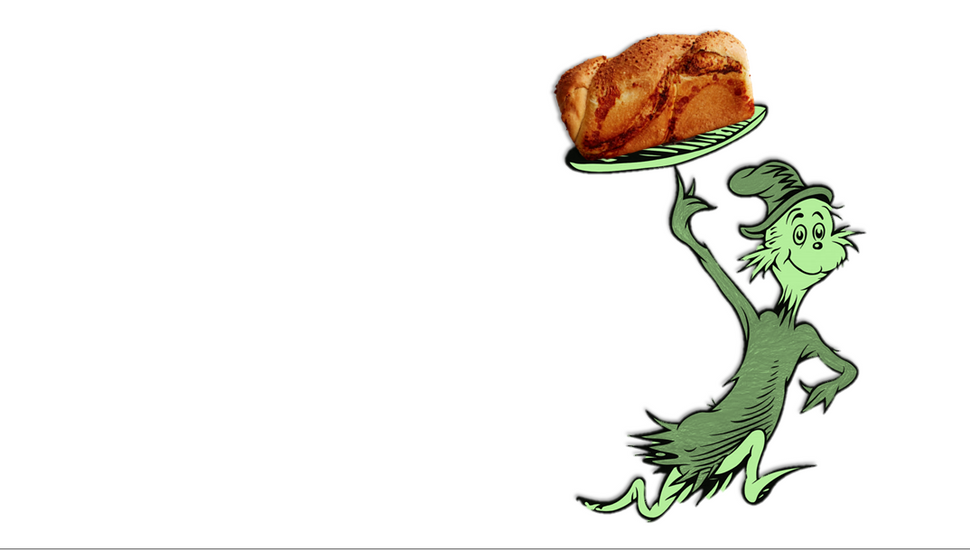 Like any decent Millennial chef, I rely on the Apollo and Artemis of aesthetically pleasing recipe websites: New York Times Cooking and Bon Appetit.

But Tuesday, I found one of my old favorites embroiled in controversy that someone— anyone— just had to see coming. The recipe in question was one for babka, the classic dessert (or breakfast, or in large volumes, dinner). The squishy dough is normally rolled with chocolate or cinnamon. But Melissa Clark of the New York Times, bless her heart, decided to roll the dice.

“As for the filling, it’s a simple and adaptable mix of ricotta spiked with Parmesan, chopped herbs, alliums and optional ham or olives to make it saltier,” she wrote.

“HAM BABKA! This is a shanda! What will the @nytimes think of next??? Bacon hamentashen?” wrote one user.

“I’ll have the regular babka, and my friend will have the ‘bad jew special,” said another.

You guys, the @nytimes is recommending a savory “babka” with ricotta and recommends you add “chopped ham, salami or even olives to the filling for a salty punch. HAM. HAM BABKA. https://t.co/4vl8oDFemu

Who, pray tell, are these recipes for? I never went to Hebrew school, I have one Jewish parent and I lose all self-control around a charcuterie plate, but I cringe at the thought of rolling ham or salami into babka for “a salty punch,” as Clark writes. This is nowhere near the first time that the Times has wound up and unleashed a salty punch to the face of Jewish food, or to any other cuisine for that matter.

Who could forget the great Green Pea Guacamole Wars of 2015, when Clark published a recipe that had even President Barack Obama weighing in (“respect the nyt, but not buying peas in guac. onions, garlic, hot peppers. classic.”) and prompted the hashtag #YouMightPutPeasInGuacamoleIf, as in “#YouMightPutPeasInGuacamoleIf You point to the menu and say ‘This one’ rather than trying to pronounce a foreign word.”?

But it feels like the Times has been working overtime this year. This debabkle comes just a couple of months after Clark published a recipe for matzoh that is decidedly not kosher for Passover.

We also heard from Alison Roman, who offered us “apples and honey with crushed walnuts” instead of charoset.

“I’ve always wanted it tangier, crunchier and, well, I wanted a salad,” she wrote. “This is that salad.”

I don’t know many people who are looking to switch up a classic recipe like the babka. In my experience, even non-Jews (and especially non-Jews) want the tried and true, the Bubbe/Zaide recipes, the ones that evoke family holidays, Shabbat lunch and the smells of home.

As many Jews have assimilated into secular and non-Jewish society, the recipes have remained decidedly old-world. Why, then, does the Times act on the urge to spruce up foods tied to sensory memories, foods that were borne of scarcity, foods with ritual and religious significance?

For its pea guacamole, its “brothy chicken soup with hominy and poblano,” the Times has been accused of cultural appropriation. Columnist Alison Roman, now on temporary leave for blasting two women of color for monetizing their brands, has been held up by critics as the emblem of how white cooks profit off cuisine from people of color.

“It’s easy for those in the mainstream to cherry-pick the aspects of whatever culture they happen to like that week,” writes Navneet Alang in this article, which I’d highly recommend.

But while other cultural cuisines are watered down and appropriated for white chefs, I’d argue the Times’ issue with Jewish food is different. Often these recipes are written by Jewish chefs— Clark and Roman are Jewish.

Roman wrote in Bon Appetit about her grandmother’s brisket, saying “Jews and those who love them know the kind of brisket I’m talking about: smothered in ketchup with too much sugar and too little salt, cooked either not enough or too much but somehow either way results in a sweet, gloppy, underseasoned, too-tough hunk of meat. And to those rings of uncaramelized onions, I ask, who sent you?”

I have no idea what she’s talking about. To Alison Roman’s take on brisket, I ask, who sent YOU?

At the root of these reinvented recipes is an old trope about Ashkenazi cuisine— simultaneously gloopy and dry, too salty and too bland, too fishy and too fatty. How much longer can food columnists write off an entire ethnic cuisine?