The chef who blends kosher and soul talks Juneteenth, food as a form of resistance

For chef and culinary historian Michael W. Twitty, studying the food of the past doesn’t just uncover what people used to eat; it reveals the stories they wanted to tell.

“When you talk about people surviving to the next day or the next decade, what you’re talking about is them making a commitment to their descendants,” Twitty said. He was talking about the generations of enslaved people who lived, labored, and died in antebellum America, for whom cooking was one of the few ways to preserve, adapt and pass down their traditions.

Since the launch of his blog Afroculinaria in 2010, Twitty has emerged as a committed chronicler of the cuisines crafted over generations by enslaved African Americans. As a historical interpreter, he’s recreated antebellum cooking methods at former plantations and spoken out against tourists who visit those sites without wanting to learn about the people who were forced to labor there.

As a chef, Twitty has led culinary tours to West Africa, teaching about the traditions that still influence contemporary American cuisine. And as a writer, he’s won the James Beard Award for Best Food Writing for his 2018 book “The Cooking Gene,” a memoir that traces the origins of Southern food culture and his own family history. He’s currently working on his second book, “Kosher Soul,” which will explore the intersection of Jewish and African American cuisines.

I asked Twitty about his work and the food history behind Juneteenth, a holiday that marks the end of slavery and takes its name from June 19, 1865, the day when Union soldiers arrived in Galveston, Texas, bringing news of the Confederacy’s demise to the last enslaved people in America.

The following has been edited for length and clarity.

Irene Katz Connelly: What makes food such a good vehicle into the past?

Michael W. Twitty: It’s one of the most intimate ways to know people of the past, including your own ancestors. There are very few ways we can know the people who fed into our gene pool. But when we eat the same food, there’s this sense of continuity. That’s always been it for me.

Tell me a little about the food traditions behind Juneteenth.

Juneteenth has a tradition of red foods: red soda, barbecue sauce, sweet potatoes, baked beans, watermelon. Even red velvet cake gets in there. It symbolizes perseverance, because for our ancestors in West and Central Africa, red was one of the most important colors: it’s the color of creativity, the color of fire, the color of war, the color of resistance. When red shows up, you know it’s a most spiritual moment.

It’s one of the deeper parts of our culture, and in that sense Texas [as the birthplace of Juneteenth] is particularly interesting. According to the 1870 census, Texas had the most people whose birthplace was in Africa. Many were brought here via the Caribbean, in the clandestine slave trade that developed after [Congress abolished] the African slave trade in 1808. So they had the memory of that tradition.

You’re giving a talk this weekend on Juneteenth and the power of African American foodways to “communicate techniques for survival.” Can you elaborate on that?

A Jewish conversation about Juneteenth. Jodi Rudoren, editor-in-chief of The Forward, hosts Rabbi Sandra Lawson of Elon University and Tema Smith, a contributing columnist, in celebration of the end of slavery in the United States. Click here to join the conversation June 19 at noon EDT.

How did you find your way to this work?

Today a kid can read a book about food history. I didn’t have that. It’s become more popular recently, but it’s not a major anywhere, it’s not a class. You can’t go become a food historian by studying.

So when I was growing up I used to do ridiculous experiments. I tried to make hominy from Indian corn — you know, the stuff in the store that’s already shellacked. I tried to boil water using hot stones. It got to the point where my mother was like, “Please don’t kill yourself, and if you do, leave the kitchen clean first.” Her favorite phrase was, “Michael, what the hell are you doing?” I thought that was my name for a time.

Did you actually get the water to boil?

I did. But I found it didn’t last very long. So already that taught me that those that used this cooking method had to cope with certain things.

As an adult, I learned a lot about food history when I taught Hebrew school, which I did for 15 years. I often taught about the Shoah, and I started doing some cooking and reading from “In Memory’s Kitchen,” which is a book of recipes collected by women imprisoned in Theresienstadt. They were recalling the grand cuisine they’d enjoyed — all those Central European pastries and desserts — and fantasizing about what they’d had before the war. That collection let me have a conversation with my students about life and resistance, not just death and victimization.

One thing that really strikes me about your work is your willingness to relive extremely painful histories. You’ve led cooking tours while dressed in the clothes of enslaved people. Why is that approach important to you?

I’ve never been happy as an armchair historian. I really want to understand why things were the way they were. You don’t understand how someone felt during the cooking, unless you’re wearing their clothes. People come to historic kitchens thinking it was really quaint, that everyone was happy being an 18th-century Ina Garten, but it was not like that. Those clothes teach you how it would have been: how sweaty you get, how much water you need to drink during the day. I do that so I can pass it on to someone who would rather not go through the experience themselves. 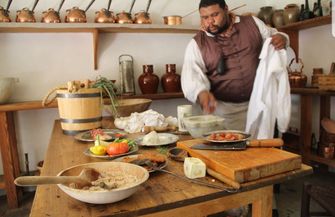 I did. Picking cotton is hot, painful, backbreaking, endless work. It’s a kind of labor that is completely draining. I had an emotional breakdown one time I did it, because I just didn’t know how [my ancestors] did this. I knew I could go home. That’s the part that broke me the most. I could go home, my ancestors couldn’t.

How does food history play into the moment we’re living through now?

I think the values are there. Making sure your neighbor doesn’t starve, making sure people know they’re welcome that they shouldn’t be lonely — that’s the same thing as the Golden Rule.

Look at this time period we’re living in. A lot of people are still sequestered, or living with very limited human contact. Why do we have people over for Pesach? Why do we have Juneteenth and Kwanzaa? Why do we have these massive table-based celebrations around life cycle events? To bring people together, to recall and rehearse who they really are.

You’re steeped in two diaspora cooking traditions: African American and Jewish. How do they come together at your own table?

I try to make sure that when they intersect, that they play off each other. For example, I’m throwing together my own Juneteenth spread — for a few people, obviously, because of COVID. It’s barbecue chicken time and sweet potato time and hibiscus Kool-aid time. But I’ll also have harissa, red horseradish, and shakshuka. And those are all red foods, but from the Jewish diaspora.

The chef who blends kosher and soul talks Juneteenth, food as a form of resistance