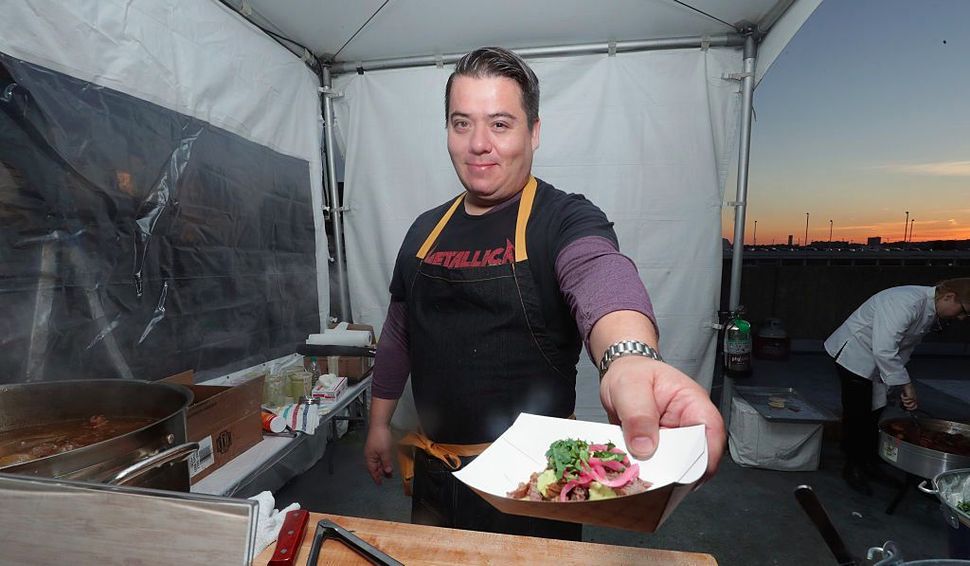 If you think homemade brisket requires a day of hovering by the oven, Katsuji Tanabe wants you to know you’re doing it wrong.

On Friday night, about 50 far-flung millennials tuned into a virtual cooking class to watch the Raleigh-based chef make ten-minute brisket tacos with a traditionally Mexican and totally kosher salsa.

He poured mezcal. He shared taco-holding tricks. He answered many iterations of the question “Will this be spicy?” For Jews deprived of access to bubbe’s brisket for far too long, it was a Shabbat miracle — all delivered by a chef who doesn’t keep kosher at home, and isn’t even Jewish.

“Even though Shabbat isn’t my tradition, I’ve adopted it as my own,” Tanabe told the crowd.

The son of Mexican and Japanese parents, Tanabe immigrated to Los Angeles as a teenager, where he did stints as a dishwasher (including at Hooters) before working his way up the ranks of the city’s white glove restaurants. He was mired in a particularly grueling gig when he got a call from upscale steakhouse Shiloh offering him a job as chief chef. Tanabe was elated — until he walked into the dining room, saw the kippah-clad diners, and realized it was a glatt kosher establishment.

“I love pork, I love lobster,” Tanabe recalled telling his potential employers. But he took the job, which he now credits with forcing him to think outside the pot: Instead of relying on creams and sauces to flavor meat dishes, for example, he developed a flair for chilies and spices.

“I never picked kosher,” he said. “Kosher picked me.”

So when it was time to go out on his own, it was fitting that Tanabe stuck with kosher. His restaurant Mexikosher, which opened in Los Angeles in 2011 (it has since expanded to New York), serves up fast casual Mexican fare — but without the cheese and sour cream many associate with the cuisine. He’s offered diners veal sweetbreads, goose tacos, and plenty of vegan cheese. During Passover, he even kashers his food truck.

Now, of course, his restaurants have been temporarily shuttered by the coronavirus pandemic. Tanabe has spent his quarantine dropping wisdom via classes like this one hosted by One Table, an organization that encourages millennials to host Shabbat dinner parties for which friends — and complete strangers — can register online. Providing hosts with hospitality coaching and meal subsidies, the organization uses technology and the lingo of self-care to market the age-old ritual as a cure for burnout.

OneTable prides itself on ambience, and it’s hard to recreate that via Zoom. But, from his Raleigh kitchen, Tanabe did his best, showing spectators how to mix mezcal and miso paste into a cocktail, slice chilies for salsa and heat up store-bought tortillas (“No shame in that!”). The secret behind his quick brisket? Slice the meat thin, and beat it even thinner with a knife handle before frying.

While he cooked, he discussed his success (“I’m only the best Mexican kosher chef in America”), shared the perks of owning a restaurant that closes on Shabbat (“You can have sex on Shabbat, right? My rabbi says so.”), and committed some minor acts of Jewish heresy (“I don’t really care about latkes”).

Some viewers followed from their kitchens, knives at the ready. Others watched from their couches. Still more kept their cameras off, by which I can only assume that, like me, they were eating chocolate chips and waiting for their boyfriends to pick up pizza.

Once the meal was assembled, Tanabe tuned out, leaving the class to share a quick Shabbat blessing and tuck in at their many tables. His biggest tip? Be generous with the mezcal. “It’s a mitzvah on Friday to get drunk.” (Halachic reality check: No, it’s not.)

Tanabe may not be a member of the tribe. But as Maya Katz-Ali, one of the event’s hosts, quipped, “I’ve never taken such a Jewish cooking class.”