Meet the bakers who introduced Zach Banner to challah

Sara and Hannah Loffman hard at work. Image by Courtesy of Sara Loffman

When Pittsburgh Steelers offensive tackle and emergent Jewish ally Zach Banner posted a blow-by-blow video of his inaugural encounter with challah, Jews around the world found themselves a little verklempt.

But the four hard-core Steelers fans who provided his first loaves were simply awash.

“I was a mess,” said Sara Loffman, 27, the oldest of four sisters from New Jersey who have spent quarantine operating a 21st-century bake sale to benefit a slew of social justice causes — and unwittingly ended up in the middle of a football player’s Jewish education.

Just how did their challah travel from a suburban kitchen to a celebrity’s Twitter feed? It’s a saga that started at the onset of the coronavirus pandemic when, like many millennials, the Loffman sisters migrated to their family home in Teaneck, N.J. Sara, a marketing coordinator for Jewish day school consortium Prizmah, and Marni, 24, a participant in the Jewish service program Avodah, started working from their childhood bedrooms. Hannah, 22, a now-graduated senior at SUNY Binghamton, and Eliana, 16, a high school sophomore, plunged into virtual classes.

In the ensuing weeks, untold numbers of Americans tried their hand at amateur baking. But the Loffmans were ahead of that trend — by about a decade. All four had learned to bake as girls, using a recipe their mother perfected over years (alas, they declined to share its secrets). To fill the long quarantine hours, Hannah returned to the beloved pre-Shabbat ritual, embracing her role as the family’s chief baker.

“It definitely grew out of my unending boredom,” Hannah said of her baking habit. But she quickly found new destinations for her loaves, contributing to Shabbat potlucks hosted by a local ambulance corps and offering free challah to first responders in the area. As demand rose, she recruited her sisters into the kitchen.

The project kept them busy at a time when many felt paralyzed. But after the murder of George Floyd in late May, the sisters started looking for ways to contribute to the social justice movement blooming around them. They figured that if people liked their challah so much, they might be willing to buy it, especially if the proceeds went towards organizations supporting anti-racist work. So early June, they went into “business” under the moniker Challah Back Girls, hawking challahs — two for $18, guaranteed in time for Shabbat — in flavors from chocolate chip to coffee crumb on their website.

Each week, the sisters donate their earnings to a different non-profit: past recipients include the Loveland Foundation, which provides therapy to Black women and girls, and Campaign Zero, which advocates for policing reform. 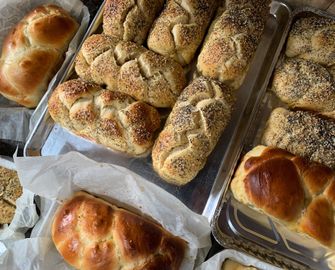 A sample of the Loffmans’ wares. Image by Courtesy of Sara Loffman

From the start, the Challah Back Girls faced marathon sessions in the kitchen. Baking days start at 9 a.m. and can last into the wee hours of the night. Hannah mixes the dough, while Eliana supervises the braiding and acts as the in-house DJ. (“One Direction” and “Panic! At the Disco” are fan favorites). Sara, who has to balance a full-time job with her challah responsibilities, snaps photos for Instagram and fields questions about the kitchen’s kosher status (parerve, she assured me) throughout the day. Marni, who has returned to her job in Washington, FaceTimes in for culinary “consultations.”

But baking isn’t the Loffmans’ only passion. They’re also football aficionados and fervent fans of the Pittsburgh Steelers. So when they saw the anti-Semitic comments made by Eagles player DeSean Jackson earlier in July, and watched Banner’s emotional statement of support for the Jewish community, they knew exactly where they were donating next: Banner’s B3 foundation, which supports underserved schools in Los Angeles, Tacoma, Wash., and Guam.

The Loffmans didn’t even expect a response to the email they sent Banner and his team. Instead, his very public endorsement of their skills led to a massive increase in orders, from about 30 per week to over 350 — and a flood of messages from far-flung locales. A Reno, Nev., couple wrote that they hadn’t enjoyed challah since the start of the pandemic; a Mormon family in Massachusetts expressed support for the Jewish community; and one Jew in Colorado said she was inspired to celebrate Shabbat for the first time in years.

So I tried challah for the first time and let me tell you… ?

Deadline for ordering in support of @B3Foundation is TOMORROW at 9am (yeah, I messed that up in the video). ➡️ https://t.co/cxuKjno5o6 pic.twitter.com/n9CRBqI6x7

Of course, once Hannah and Eliana return to school in the fall they won’t be able to pull all-nighters in front of the oven. The Challah Back Girls are exploring different options for their future, like inviting other bakers to join the operation.

For now, Hannah said, she’s invigorated by the idea of her challahs making their way to those many kitchens across the country. “In my mind, it’s oven to table,” she said.

Still she admitted, “You don’t really expect it to be on Zach Banner’s table.”

Meet the bakers who introduced Zach Banner to challah