What do we miss without God in our lives?

Still Small Voice is a collection of 18 interviews with clergy tackling 18 questions about God, published during the month of Elul, a time of Jewish reflection and accountability. Click here to read the introduction to the series.

Radical amazement. Are we amazed by our very lives and the things we can’t explain? And when we’re startled by blessing, are we then tasked to return it in some way?

“Radical amazement” is the famous phrase written by the late philosopher Rabbi Abraham Joshua Heschel, and there are troves of essays devoted to what Heschel meant. But you don’t need to have read any of them to recognize the concept. It’s that simple, visceral response of being amazed, jolted, sometimes even speechless, at what we get to see, taste, hear, and feel every day, even in moments of anguish.

You may or may not connect something divine to the miracle of all of it. But “radical amazement” might just be the best way to encapsulate what we miss without God in our lives at all.

When I asked Rabbi Kenneth Chasen to be part of this series exploring the divine in the midst of a pandemic, he chose the Heschel text to address the question of what we lose without God.

Chasen, who helms a large Reform pulpit in Los Angeles, Leo Baeck Temple, is known nationally for his contributions to Jewish music and his focus on social justice. He strikes me as someone who is keenly aware both of radical, powerful, miraculous gifts and how those gifts obligate us. This is the Heschel excerpt:

Even before we conceptualize what we perceive, we are amazed beyond words, beyond doubts. We may doubt anything, except that we are struck with amazement. When in doubt, we raise questions; when in wonder, we do not even know how to ask a question. Doubts may be resolved, radical amazement can never be erased. There is no answer in the world to man’s radical wonder. Under the running sea of our theories and scientific explanations lies the aboriginal abyss of radical amazement.

Maybe, Chasen told me, God is found in the moments that floor us, exquisite or excruciating, the places where our usual tools fail. This pandemic is one stark example.

Our conversation is below, edited for clarity and length. To read other interviews with other rabbis in our series, Still Small Voice: 18 questions about God, click here, and send (gentle) feedback to pogrebin@forward.com

‘We have no armor for it’ 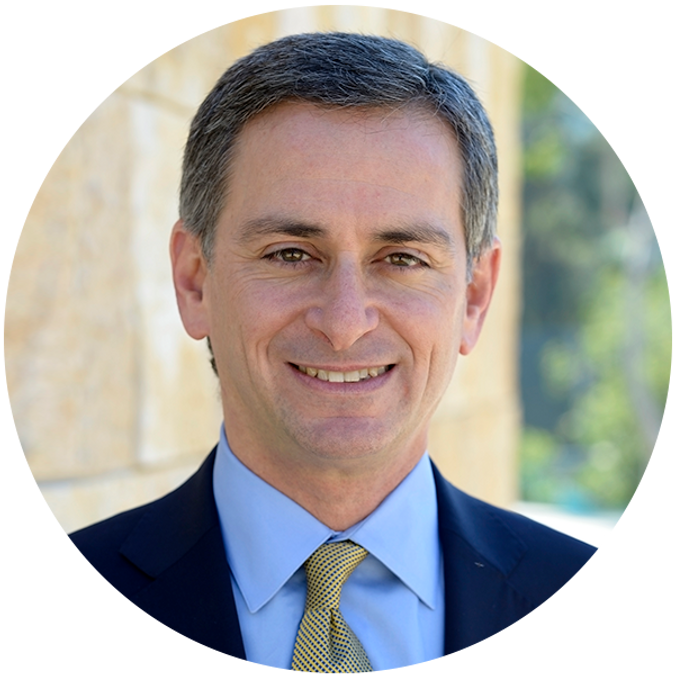 Rabbi Kenneth Chasen: What is really causing everybody to quake right now is we’re in an unknowable terrain that is not of our making. We don’t know why this crisis showed up now. We have no armor for it. Just the fear that a pedestrian interchange could end up causing someone who I don’t even know, to die? There are huge questions.

Abigail Pogrebin: But people do have scientific answers as to how the virus started.

KC: We can understand the science of how the virus spreads. But as to why we’re here and why this is happening, those are huge questions that are the terrain of faith. That’s why I’ve never seen faith and science as being in any way in competition with one another. They’re asking different questions.

AP: What do you mean by that?

KC: I think the mistake that we make is that the more mighty human beings have become and the more understanding we’ve harnessed about the world, the less impressed we are by God and God’s power.

AP: I’m pretty impressed with God’s power right now. Are you saying that part of radical amazement is not just the realization that there are moments science can’t explain but that we are not the ones able to affect events?

KC: God is the nomenclature that I use for that territory that is not mine to control. One of the reasons that a lot of people are turning back to their faith communities right now, in a way they hadn’t before, is because there are going to be no answers. And we humans do not do well with not controlling.

AP: So God is found in a kind of surrender to a greater pilot?

KC: If you think about it, religion is really the terrain for sitting with what we can’t control, and hopefully feeling that there’s blessing in it.

AP: Have you seen examples of that in your pastoral work — when someone has found blessing in acknowledging a certain powerlessness?

KC: Just two days ago I spoke to a member of my congregation who has finally decided to stop her chemotherapy. She’s in her mid-60s and she’s going to die soon. She’s a deeply faithful woman and she said, “You know, through all of this, I’ve never blamed God. I never felt like God is doing this to me or someone selected me for this.”

I was so refreshed by her perspective, because she was basically saying: No, I don’t blame God or try to add up why I’m dying. I lived a life of peaceful coexistence with God through a life of humility and gratitude, allowing that there are “why” questions that I can’t answer. And because I lived that life, it comes in pretty handy when I need it most.

If you spend your whole life trying to wrest the reins away from God and control it all, it’s really hard to hand over the reins in a moment of life-shaking crisis.

‘Ask yourself: What is God?’

AP: Your congregant sounds remarkable, but I have to be honest and say I’m not sure I could be that sanguine. I fear, for instance, that I would feel somehow abandoned by God if one of my children got very sick. Would you say that’s the work we have to do — to make peace with whatever happens to us and not abandon God because of it?

KC: One thing I’ve observed is that it’s a whole lot better to go through the ultimate I-don’t-have-the-power experience having already developed those muscles over years of being engaged with the push/pull with God.

AP: And that push/pull with God is what?

KC: Ask yourself, what is God? Is it a receptacle to which I pray and it answers me? Or is it something that contextualizes my place in the world and teaches me to live with the chaos?

AP: I can hear some atheists saying the chaos is exactly why they don’t believe there’s a God.

KC: I love the passage in our machzor (holiday prayer book) that says there’s no such thing as atheists. We always make something or someone into our God. Maybe it’s your money, maybe it’s your power, maybe it’s your station in life. Maybe it’s your work. Whatever it is, ask yourself: is your God going to be a source of comfort for you when you are staring into the abyss?

KC: The question is: how do I live in peaceful coexistence with a world where there’s that level of uncertainty about it all. If I can make peace with that, including the moments that are transcendent, I might be able to live in peace with the part that is painful and that I cannot know. God is that container — for all of that knowledge that is beyond our grasp, and enables us to be humbled in a world where we have been told by our tradition that we’re God’s partners.

AP: That’s where I’m also stuck: the Rabbis tell us we’re God’s agents in the world — to complete creation and heal what’s broken. But so many of us feel helpless now.

KC: We find out in moments like pandemics that we’re only so much God’s partners. We’re only so much Godlike. I think that on some level the exercise of religious practice and of faith is, we want to have all the answers, especially when life gets really messy and sad.

‘We have an obligation not to squander’

AP: And you’re suggesting that not having all the answers is that “radical amazement” — which shifts our focus from what we’ve lost to what we have. In other words, “Look at all the gifts we’ve been given — life, breath, family, friendships, the simple gift of another day.” We didn’t earn any of it so we should marvel at it and support those who have less.

KC: Right. Living with faith is saying, “I can’t even begin to fathom how it is I received the gifts that are not of my making, but are mine.” And we have an obligation not to squander them.

AP: The first prayer of the day drives that home: “Modeh Ani” — “Thank you, God, for this day.” Its simple language has become acute for me during this crazy chapter. Getting another day is not a given.

KC: That’s a very religious way of looking at waking up. Science will explain exactly why you woke up. It doesn’t explain why it didn’t all end last night. And the person who is filled with the kind of wonder that Heschel’s describing in that text wakes up in the morning without any difficulty being able to say the Modeh Ani. I wake up in the morning and I have another chance.

AP: So maybe what we miss without God is the minutiae of blessing.

KC: Think about the formula for every bracha, even if you’re asking God for something: “Baruch Atah Adonai Eloheinu Melech Ha’olam— Blessed Are You….” it’s all a formulation of gratitude to acknowledge that I don’t know why I have any of this, why I’m even alive; why I was given a body with which to see and speak…

KC: When Dresner went to Heschel’s bedside, what did Heschel say was his first thought when he came to consciousness? ‘Take me, Oh Lord. I have seen so many miracles in my lifetime.’ That was his response.

It’s really hard to live like that, but it’s something to aspire to. And I think when someone decides to fold the tent and say, “Oh, science tells me that there is no God, it’s poppycock,” well, maybe there’s no God in the way you’re thinking of God. But what do we do with that whole category of the biggest stuff that’s goIng to cause me either to be troubled or to experience transcendence, mystery, beauty, and awe?

Still Small Voice: 18 Questions About God is a special project for the month of Elul, a traditional period of reflection and accountability. Click here to read the next interview in the series, and here to browse the collection.

What do we miss without God in our lives?