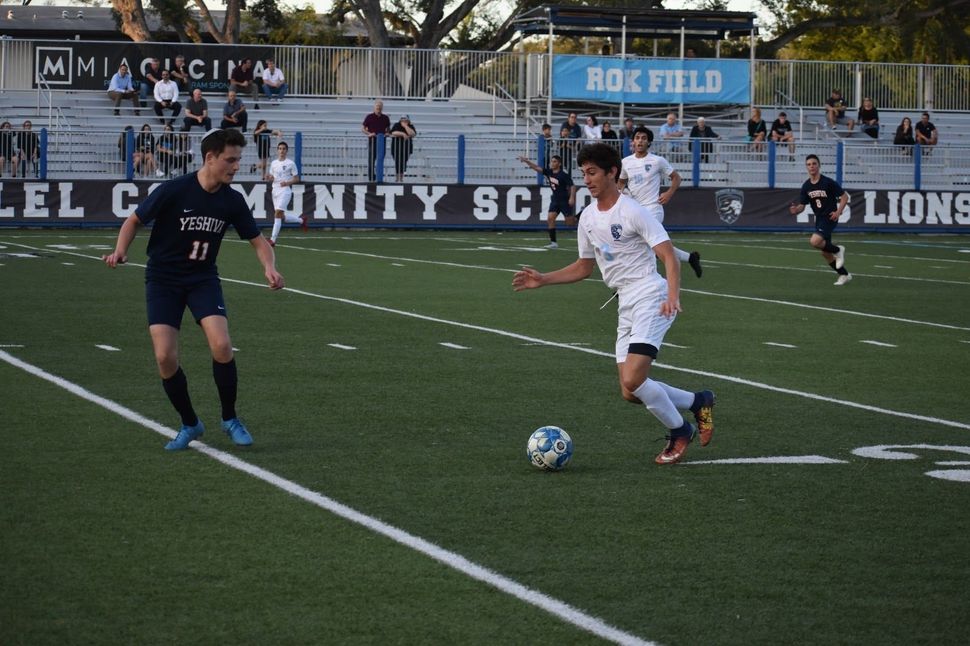 Sholem Benchimol, right, on the field. Image by Daniel Benchimol

Sholem Benchimol was a talented soccer player with aspirations of one day becoming a professional. But although he trained diligently with a soccer club after school, when game day arrived he usually couldn’t play — because most youth soccer games take place on Saturday, the Jewish day of rest.

Sholem, born into an Orthodox Jewish family in Miami, couldn’t compete on Shabbat.

Sholem’s career was cut short in April when the 17-year-old, known for wearing his kippah on the field, died in a bike accident. His older brothers, Daniel Benchimol, 29, and Menajem Benchimol, 24, are honoring his memory by creating a team that will serve Jewish players like him. The pair are partnering with Israeli professional football team Beitar Jerusalem to launch a youth soccer academy that will schedule its games around Shabbat.

“This is a team [Sholem] would love to be on: where it’s competitive, they take it seriously, but he could still keep Shabbat,” Daniel said in an interview.

First developed by professional soccer clubs in order to ensure a steady supply of talented and well-trained young players, soccer “academies” provide children and teens with intensive training and the possibility — however slim — of one day going pro. Miami, a soccer hub within the United States, already boasts a number of academies associated with European teams like FC Barcelona of Spain, Paris Saint-Germain of France and Juventus of Italy.

Like the professional teams they emulate, however, most of those academies compete on Saturdays, making it difficult for observant Jewish players to participate. Sholem trained with a soccer team but was unable to compete regularly until he started attending Scheck Hillel Community School, a religious day school which schedules games around Shabbat.

Sholem flourished on his school’s team, and was slated to become its captain this fall. But his family never forgot the days when he couldn’t play. After his brother’s death, Daniel, who had worked professionally for sports live-streaming services, used his connections to get in touch with Moshe Hogeg, the owner of Beitar Jerusalem, the world’s only professional soccer team that does not play on Shabbat. The academy they’ve developed will serve boys ages four to 14, with the hope of expanding into older age groups over time. With the academy’s launch later in September, Beitar Jerusalem will become the first Israeli team to launch an academy outside the country.

Hogeg said in a press release that the project would “contribute to strengthening our connection to Jews and various populations overseas as well.”

For years, Beitar Jerusalem’s reputation has been clouded by incidents of racism and Islamophobia among its fanbase: groups of fans were known for screaming “Death to Arabs” at games, and after the team signed two Chechen Muslim players in 2013, hundreds walked out of a match. Since acquiring the team in 2018, Hogeg has implemented a “no tolerance” policy, threatening legal action against fans whose “behavior was viewed as discriminatory,” the BBC reported.

“We know this was an issue, but we feel like that’s something they care deeply about,” said Daniel, who credits Hogeg’s tactics with significantly reducing displays of racism at games. He said that the incipient academy’s relationship with Beitar Jerusalem is contingent on continued improvement.

Beitar Jerusalem and the Benchimol brothers are not the only ones pushing sports organizations to better accommodate Shabbat-observant players. Orthodox Israeli marathoner Beatie Deutsch has long refused to compete on Shabbat. She recently hired an attorney to challenge the International Olympics Committee’s decision to host marathon events at the 2021 Tokyo Olympics on a Saturday.

Daniel admitted that there are strong incentives, especially on the professional level, for teams to play on Shabbat: For one, broadcasting networks stand to make much more money off advertisements when games take place on high-viewership weekend days.

“It’s definitely a huge challenge to change that for everyone,” he said. But he’s already discussed Sunday matches with other teams in the area, and he hopes the existence of a Shabbat-observant youth team can slowly shift the culture.

The academy’s goal, he said, is that “in a few years from now, when there is a kid who wants to go professional and keep Shabbat, that he will be respected. That he’s not going to not play because he is shomer Shabbat.”