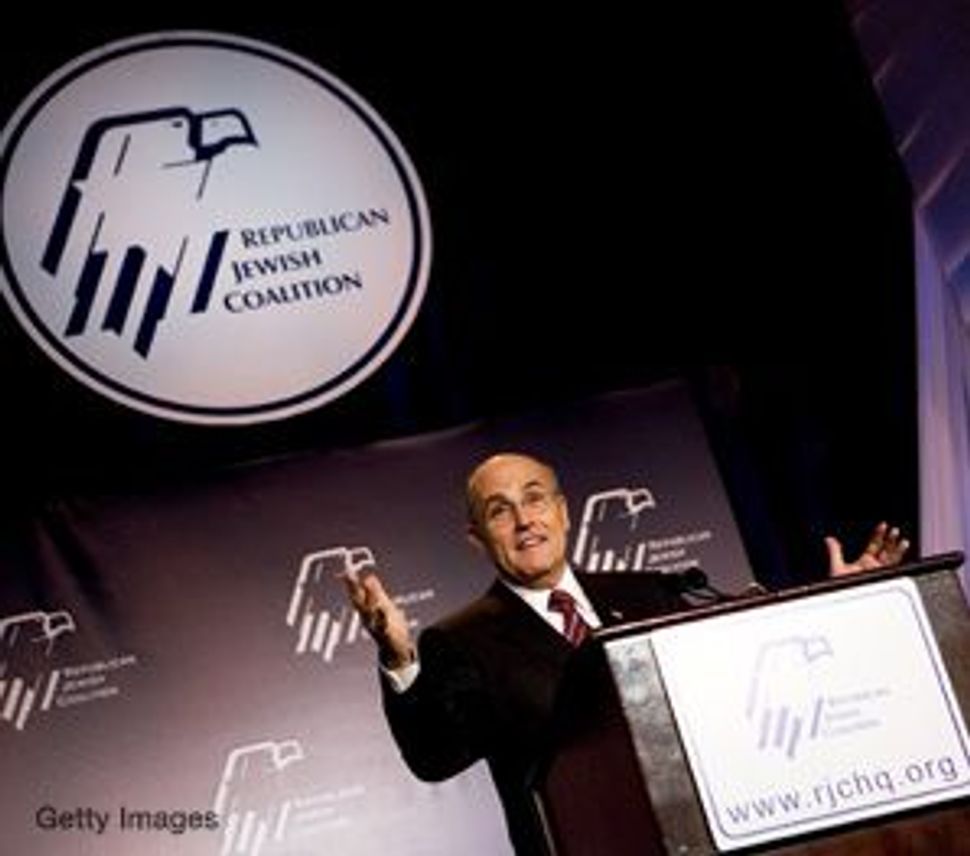 At an October 16 event for presidential candidates hosted by the Republican Jewish Coalition, Giuliani regaled his audience with the tale of how, as mayor of New York, he threw Yasser Arafat out of a concert.

Washington – In an appearance before Jewish voters Tuesday, all five Republican presidential candidates expressed skepticism about the Bush administration’s current push for peace between the Israelis and Palestinians. 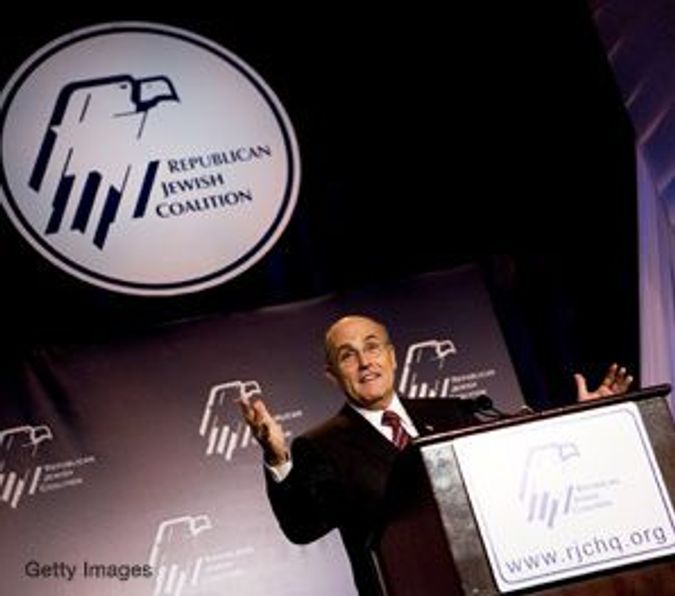 At an October 16 event for presidential candidates hosted by the Republican Jewish Coalition, Giuliani regaled his audience with the tale of how, as mayor of New York, he threw Yasser Arafat out of a concert.

Few policy differences emerged in the candidates’ speeches. All vowed to ensure that Iran does not obtain nuclear weapons; all declared their unwavering support for Israel, and all voiced skepticism toward the Middle East peace process.

The criticism of negotiation efforts between Israelis and Palestinians comes at the time when the White House is engaged in an ambitious effort to promote such negotiations, with an American-sponsored peace conference planned for next month. The Republican candidates all pointedly distanced themselves from this recent push for peace.

Kansas senator Brownback, who last week endorsed a hawkish plan by a right-wing Israeli Knesset member, told the crowd that past attempts to promote the peace process had failed and that now “it’s time we looked at other ideas.”

Former New York City mayor Giuliani, who drew applause from the audience after retelling the tale of how he threw Yasser Arafat out of a New York concert, said the Palestinians need to live up to a set of conditions before any negotiations can be considered.

“We don’t need to create another terrorist state,” Giuliani added.

Romney, a former Massachusetts governor, divided American views into two camps: those who see the Israeli-Palestinian conflict as the core of all problems in the Middle East, whom he referred to as “the liberals,” and those like him who understand, according to Romney, that the real problem is with radical jihadists.

“We’re right and they’re wrong,” is how he summed up the argument, later adding that “a measure of caution” is needed as we get closer to the peace conference that will take place in late November or early December in Annapolis, Md.

Although the audience consisted of supporters of all five candidates, it was Giuliani who clearly captivated the crowd, drawing lengthy applause and bursts of laughter.

“I gave my blood for the Republican Party in New York,” Giuliani said, explaining how difficult it is to be a Republican in New York: “This is a city Abraham Lincoln didn’t carry, I swear.”

Republicans are still a minority in the Jewish community, where three out of four vote for Democratic candidates, and Giuliani showed sympathy.

“A lot of you get grief for being Republican, right?” he asked.

Before the Tuesday event, the Anti-Defamation League sent a letter to all presidential candidates urging them not to emphasize religion in their political campaign.

“There is a point at which an emphasis on religion in a political campaign becomes inappropriate,” the ADL letter reads.

No mention was made of the letter, but neither was there much specific talk of religion. There was a notable silence about recent comments made by a few high-profile Republicans regarding the Christian nature of America.

McCain’s recent remarks referring to America as a “Christian nation” were not mentioned, nor was the brouhaha surrounding Ann Coulter, who said last week that Jews need to be “perfected.”

Earlier in the week, Richard Baehr, a member of the Republican Jewish Coalition, published an article accusing Coulter of not helping the Republican effort to attract Jewish voters. (The Democratic National Committee put out a statement Tuesday asking Republican candidates to denounce Coulter for her remarks.)

Instead of religion, the candidates focused on foreign policy. On the issue of Iran, all five hopefuls showcased their hawkishness, using the phrase “military option” time and again, seemingly in an attempt to differentiate themselves from Democratic candidates.

“The military option must always be on the table,” former senator Thompson said.

Iran’s nuclear threat has topped the foreign policy agenda of Jewish political activists for the past several years and has become a mandatory part of any political address in front of a Jewish audience.

Right now, though, it is the peace process that is making headlines. Just this week, Secretary of State Condoleezza Rice was in the region, conducting her longest and most intense negotiations between Israelis and Palestinians. Rice declared during her visit that the administration is committed to the idea of the two-state solution.

Walter Stern, an RJC board member, said the candidates were right to distance themselves from the peace process and the upcoming conference.

“It has taken a bad turn with Condi Rice,” Stern said, “Bush is sturdy, but the administration delegated [the peace process] to the State Department. I hope this is only a temporary delegation.”