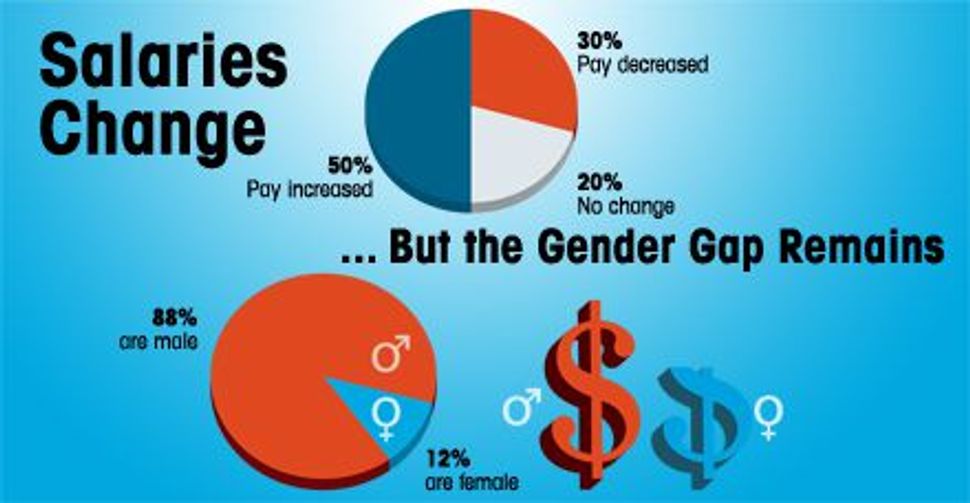 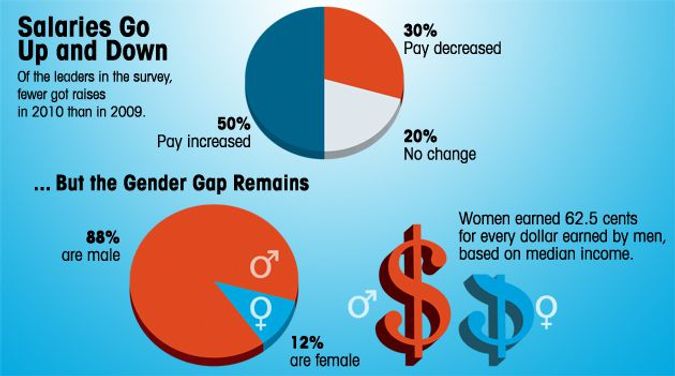 The Forward’s third annual survey of 76 national Jewish organizations paints a picture of communal stagnation in gender equality, as the number of women in leadership roles remains at the same low level, and the gap between male and female salaries has grown even larger.

Despite the dismal economy, half of the leaders in the survey received pay increases in their most recent annual reports, although that number was fewer than the 80% who enjoyed a pay hike the previous year. Nineteen men and one woman took pay cuts.

The median executive pay in the top federations, advocacy and public service groups, and religious and educational institutions dropped slightly in the past year, to $306,025. But those executives who did receive a salary boost did well compared with their national peers. In the Forward survey, the median increase was nearly 5%. That’s more than double the national standard of 2% for leaders of the nation’s largest not-for-profit organizations, as reported in September by The Chronicle of Philanthropy.

READ THE FORWARD’S EDITORIAL ON THE SURVEY, ‘OUR OWN 1%’

In the sphere of women’s leadership and compensation, the Jewish world continues to lag dramatically behind the overall not-for-profit community. GuideStar, an organization in Washington that collects and summarizes the tax returns that charities file with the Internal Revenue Service, reported in September that “only 16% of nonprofits with budgets of more than $50 million have female chief executives, while 64% of organizations with budgets of under $250,000 are led by women.”

In the Forward survey, by contrast, only nine of the 76 organizations are led by women — the same number as last year, and a drop from 11 in 2009. And since the Forward added two organizations to the list, the percentage of women is lower still, slightly less than 12%. The wage gap in the Jewish world, where female CEOs earn slightly more than 62 cents for every dollar earned by their male counterparts, is also wider than in GuideStar’s report. And it worsened from 67 cents in 2010.

Officials at the Jewish Federations of North America revealed for the first time the salary of President and CEO Jerry Silverman, who was hired in 2009 and earned $625,000 last year. But his salary is not the highest in the federation world — that spot belongs to Stephen Hoffman, President of the Jewish Community Federation of Cleveland. When asked why Hoffman earned $644,518, a federation representative said that he also oversees numerous smaller organizations.

For the first time this year, the Forward survey includes each organization’s total expenses and the number of employees.

Also for the first time this year, the Forward sent certified letters to the leaders of religious organizations to urge them to disclose their salaries in the spirit of transparency, even though they are not required to do so by law.

The only one of the 13 religious leaders to respond was Rabbi Dan Ehrenkrantz, president of the Reconstructionist Rabbinical College. “While RRC does not release information about any individual salaries, I can report that our administrative costs annually average about 15% of our total budget,” Ehrenkrantz wrote.

The highest-paid leader in the Forward survey continues to be Yeshiva University President Richard Joel, who earned $848,176 in 2010, a slight decrease from his 2009 salary. The two other university presidents in the survey enjoyed pay hikes. Jehuda Reinharz, in his last year at Brandeis University, received a 12.46% increase, while Alan Kadish at Touro College saw his pay go up by 25.62% from that of his predecessor.

“Dr. Kadish is being paid a salary of market value in comparison to some of the senior leadership at the respective institutions” in the survey, said Hedy Shulman, Touro’s executive director of communications and marketing. 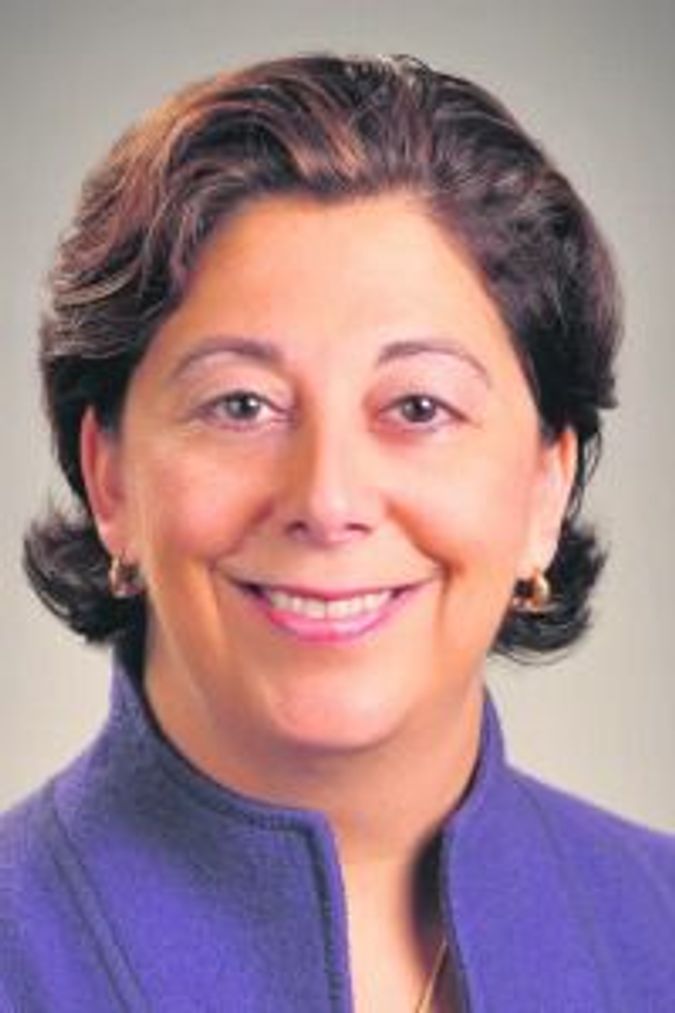 The second-highest-paid leader in the survey is Rabbi Marvin Hier, founder and dean of the Simon Wiesenthal Center. Hier also works for and is compensated by SWC Museum Corp. His total take-home pay in 2010 was $721,714.

But the Hier family makes even more. Marlene Hier, the rabbi’s wife, earned $344,329 as director of membership development, working for both institutions, and his son, Alan D. Hier, earned $187,274 as international director of fundraising and communications for SWC Museum Corp.

And someone at the center received a rather cushy perquisite: “An employee was requested to attend fundraising meetings in Israel associated with the premiere of the center’s new film during the High Holidays and he could not be away from his family during that time,” the public disclosure form read. “The center reimbursed $20,119 for airfare and accommodations for his family.”

Although David Harris, executive director of the American Jewish Committee, had taken a pay cut during the financial crisis, he also continued to receive unusual benefits, including first-class airline tickets on flights two hours or shorter, travel costs of family members who accompany him on certain trips and more than $25,000 in reimbursement for property taxes on his home in Westchester County, New York. 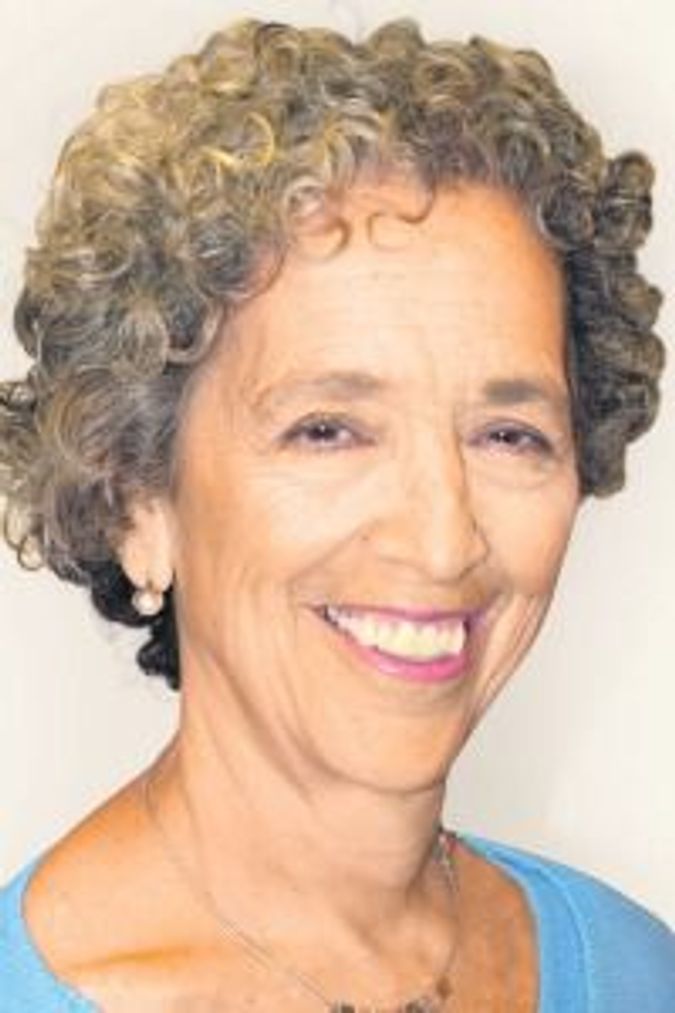 The highest-paid woman in the survey is Jennifer Gorovitz, CEO of San Francisco’s Jewish Community Federation. She remains the only woman leading any of the 18 largest federations in the United States. Second in pay among women leaders is Ruth Messinger, president and CEO of American Jewish World Service. Messinger’s salary grew to $276,217 in 2010, a 10.58% increase.

The Forward survey showed that it pays to be a Republican. Matthew Brooks is executive director of the Republican Jewish Coalition and also heads up the National Jewish Policy Center; his combined salary is $461,070. That is nearly $300,000 more than the pay earned by his counterpart, David A. Harris, president and CEO of the National Jewish Democratic Council, who takes home $171,200 a year.