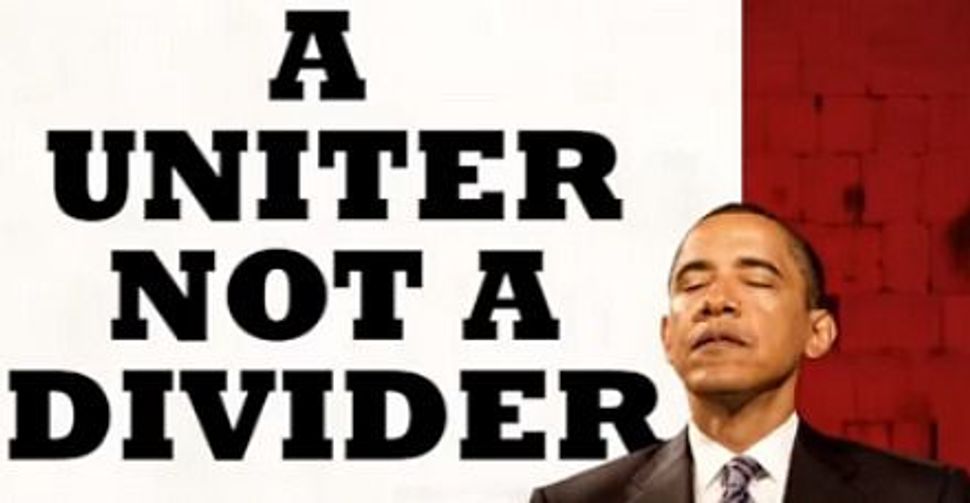 Image by emergency committee for israel 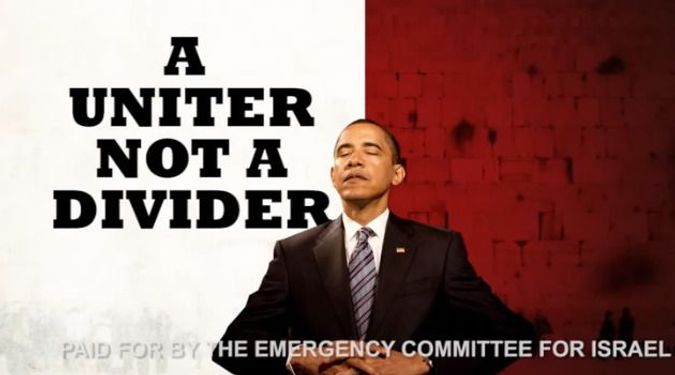 Ad-ing Against Obama: The Emergency Committee for Israel has set up a Super PAC that will be able raise and spent unlimited sums, as long as it acts independently of political candidates. Image by emergency committee for israel

Among the advocacy groups fighting for the Jewish vote in 2012, ECI is the only one to have formed its own Super PAC, a new kind of campaign finance committee that is allowed to take contributions and make expenditures without limit so long as it remains formally independent of any candidate or political party.

ECI’s Super PAC, established in 2010, has seen little use since the election cycle of that same year. But its existence suggests that ECI’s political strategy is focused more on campaign messaging than on influencing policy. The Super PAC’s filings also indicate that the group is reliant on a few major donors rather than on broad grassroots support.

Besides its recent anti-Obama ads, ECI, which was also founded in 2010, made large ad buys in a few major 2010 midterm races and special elections. But unlike its dovish opponent J Street, ECI’s strategy doesn’t call for spending time on the traditional occupations of advocacy groups, such as currying favor with incumbents or building a grassroots operation.

“We aren’t interested in funneling money to candidates to induce them to take positions they might not otherwise take,” wrote Michael Goldfarb, ECI’s treasurer and a public relations executive with Orion Strategies, in an email to the Forward. “We believe that the vast majority of Americans are pro-Israel and that if there is a real contrast on this issue between the two candidates in any given race, voters will make the right choice if they have all the information before them.”

Founded in July 2010, ECI is guided by William Kristol, a prominent neoconservative and editor of The Weekly Standard, a right-wing opinion journal. A one-time booster of Sarah Palin, Kristol has close ties to the Republican establishment. The ECI board is rounded out by prominent evangelical and former GOP presidential candidate Gary Bauer and Rachel Abrams, wife of Republican foreign policy stalwart Elliot Abrams. The group’s executive director is Noah Pollak, a former editor at Azure, a journal published by the Israel-based Shalem Center.

ECI itself is incorporated as a nonprofit 501(c)(4) organization. Such groups are allowed by the IRS to engage in political campaigning so long as they do not spend more than half their expenditures on political activity. But ECI’s associated Super PAC, called the Emergency Committee for Israel PAC, faces no such limits.

As of the latest available filings, there are only about 200 Super PACs, officially known as independent expenditure-only committees. Only one besides ECI’s appears to deal with Israel policy. That group, called US Israel Friendship PAC, was created to run advertisements in support of California Democrat Barbara Boxer in her 2010 senatorial race. Sam Lauter, a California political affairs professional whose name appears on the group’s filings with the Federal Elections Commission, said that it had no plans to be active in the 2012 cycle.

Between May 2010 and April 2011, ECI’s separate but affiliated 501(c)(4) raised over $700,000, according to tax filings the group provided to the Forward. As a 501(c)(4), ECI is not required to report on its political expenditures to the same level of detail as ECI PAC, but the organization notes that it ran five advertisements in July and August 2010 “that called on members of the public to contact their elected representatives — who were standing for re-election in the November 2010 election — and tell them to support a strong U.S.-Israel alliance.”

ECI’s 501(c)(4) also ran an advertisement during the September 2011 special election in New York to replace Democratic congressman Anthony Weiner. The group spent $25,000 on the distribution of an advertisement in support of Bob Turner, whose eventual victory was cast by some Republicans as a referendum on Obama’s Israel record.

Traditional political action committees, such as those operated by J Street and the Republican Jewish Coalition, can give funds to candidate committees or to other PACs, up to a legal limit of $5,000 per candidate per election. The money comes from individual donors to these PACs, who may give up to $5,000 per year per PAC. Donors can also direct their contributions to candidates through traditional PACs like the RJC or J Street as conduits for their donations to candidates, demonstrating their support for the PAC’s political goals and giving leverage with the candidates to whom the PAC donates.

“We raise a lot of money,” said Matt Brooks, executive director of the RJC. “Literally tens of millions every cycle, our members and leaders raise for candidates.”

ECI’s structure and its lack of a traditional PAC precludes that kind of influence.

Instead, ECI appears to draw support from a small number of wealthy donors. Only five individuals have given to ECI PAC. And in its 2010 fiscal year, five individuals provided all but a few thousand dollars of ECI’s 501(c)(4) revenue. The 501(c)(4) is not required to name its donors, so it is unclear whether there is overlap between the two groups of supporters.

“They clearly have the ability to raise large sums of money from a very small number of disgruntled hedge fund billionaires,” said Jeremy Ben-Ami, J Street’s president. “But they don’t have the ability to demonstrate a broad base of activist support of thousands and tens of thousands of people all across the country who want to signal their support on this issue for their views.”

ECI’s effectiveness is difficult to gauge only a year and a half into its operations. Though it has been criticized by mainstream Jewish groups for attempts to use Israel as a partisan wedge issue, it has become emblematic of a Republican Jewish core that hopes to cut into the 78% of Jewish voters who went with Obama in 2008.

ECI executive director Pollak said that his group will focus on Obama’s record in the 2012 election cycle. “We’re going to remind people of what a truly terrible president he’s been when it’s come to Israel, the way he’s increased Israel’s isolation, coddled Israel’s enemies… .These are things that are very much out of step with American voters, who are pro-Israel.”

The plans for ECI’s Super PAC are unclear. As of its latest filing in July, the group had only $60 in the bank, and recent advertisements have been the work of the 501(c)(4).

Meanwhile, ECI’s position as the only active Israel-focused group to have its own Super PAC may not last forever.

“Just because they’re the first Super PAC doesn’t mean they are going to be the last,” said The Israel Project president Jennifer Lazslo Mizrahi.