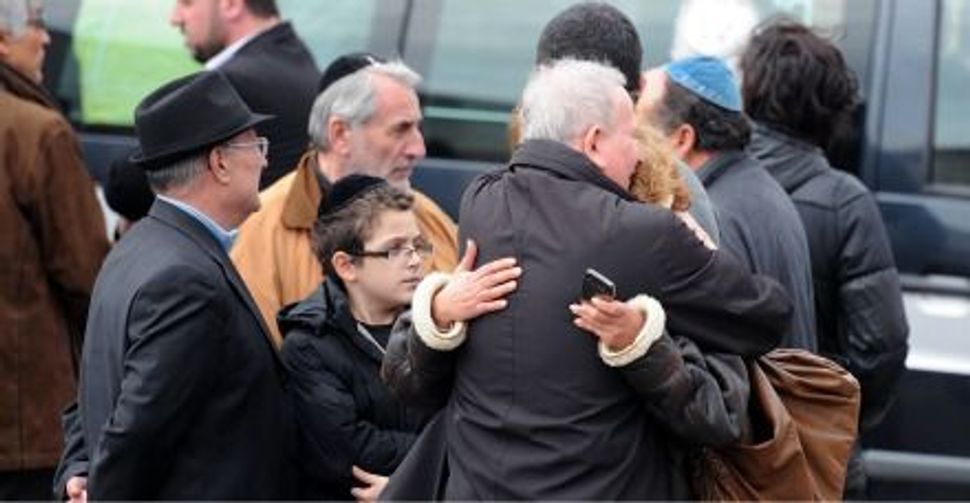 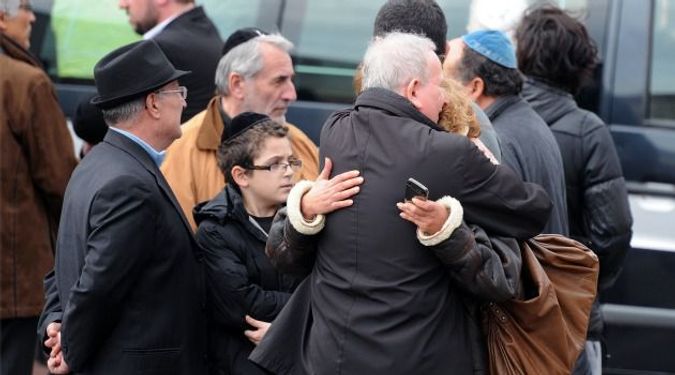 Stunned: French Jews were still in shock Tuesday, a day after a gunman killed four people at a Jewish school in Toulouse. Image by getty images

When Arié Bensemhoun, a Jewish community leader in Toulouse, woke up Tuesday morning, he thought for a moment that the horrific shooting of three children and a rabbi at a local Jewish school might have been just a bad dream.

Like others in the close-knit Jewish community in the southern French city, Bensemhoun said he couldn’t bear knowing that the worst anti-Semitic attack on French soil in decades had taken place just 24 hours before in his own backyard.

“Then the reality hit and I knew it was true and it had really happened,” Bensemhoun told JTA. “We are living a nightmare. It’s hard to describe the shock felt by our whole community. It’s worse than you can imagine. How can this be happening in the 21st century?”

Southwestern France went to a scarlet terror alert, the highest possible, shortly after the shooting, which occurred just after 8 A.M. Monday at the Ozar Hatorah school in Toulouse.

A manhunt involving dozens of French police and anti-terrorism investigators was underway Tuesday for a gunman with a video camera around his neck who pulled up on a black motorbike and fatally shot three Jewish children and a teacher.

The bodies of at least three of the victims were flown to Israel for burial Tuesday while school children all over France stood and paused for a moment of silence Tuesday morning to remember them.

French President Nicolas Sarkozy, who suspended his presidential campaign until Wednesday and flew to Toulouse after the attack, called the tragedy “obviously anti-Semitic,” and the interior minister called for heightened security at all Jewish schools and institutions in France. France, home to Europe’s largest Jewish community, has an estimated 600,000 Jews.

On Monday night, thousands of Jews and non-Jews, including politicians, gathered in Paris for a silent demonstration organized by the French Union of Jewish Students. One banner among the many French flags held aloft by the marchers read, “In France, Blacks, Jews and Arabs are killed.”

“It could have been anyone’s child,” said Jacques Benichou, the executive director of the Fonds Social Juif Unifié, the main French Jewish welfare organization, in a phone interview as he was boarding a plane for Paris Monday night after spending a large part of Monday with Jewish leaders in Toulouse. “Even if the killer was targeting other minorities, there’s no escaping that he targeted Jewish children as well. We all feel deeply sad and very alarmed.”

Nicole Yardeni, one of the leaders of the Toulouse area branch of the CRIF, France’s main Jewish umbrella organization, said she was overwhelmed by the outpouring of support after the shooting.

“What I’m focusing on is how we feel about the outpouring of support from our neighbors, the country and beyond the country that came so quickly,” she said on Tuesday. “Even the Jewish community of Istanbul has called us. And not just Jews. Many people all over the world have reached out. It has been such a great help. We never expected such an outpouring of support.”

Yardeni’s son attended Ozar Hatorah a few years ago and she, like many in the roughly 20,000 to 30,000-strong Jewish community in Toulouse, knew parents and teachers at the school.

She said that the Paris-born rabbi killed in the attack, Jonathan Sandler, 30, was an enormously well-liked teacher who had just begun work at the school in July. Not everyone knew that he was an alumnus of Ozar Hatorah and, after 10 years of study and training in Israel, had decided to return.

“He wanted to give back to this school who had given him so much,” Yardeni said.

She spoke to reporters through tears on Monday after viewing the surveillance tape of the shooting.

Witnesses described the gunman as “calm” and “determined” as he pulled up to the school, dismounted without taking off his helmet, and started shooting. He first shot Sandler along with his two sons, Aryeh, 6, and Gavriel, 3, as they waited for a minibus to take them to their nursery.

When the first of the killer’s two guns jammed, he reached for a second and continued shooting as he chased pupils into the schoolyard, witnesses said. He cornered 7-year-old Miriam Monsonego, the daughter of school principal Yaacov Monsonego, and shot her in the head. He also shot a 17-year-old boy who remained hospitalized in critical condition Tuesday.

Police say the killer used the same weapon used in the shooting last week of the three French paratroopers of North African and Caribbean origin in the Toulouse area.

France’s Interior Minister said Tuesday that surveillance tapes at the school showed the killer wore a video camera around his neck but said they do not yet know if he was recording his own carnage.

Official reaction around the world to the attack was swift. Israeli Prime Minister Benjamin Netanyahu said the attack had a “strong, murderous anti-Semitic motive.” The Vatican called it a “heinous” crime, and the White House called it “outrageous and unprovoked.”

However, remarks by European Commission Foreign Minister Catherine Ashton about the attack in Toulouse angered some.

“The days when we remember young people who have been killed in all sorts of terrible circumstances – the Belgian children having lost their lives in a terrible tragedy and when we think of what happened in Toulouse today, when we remember what happened in Norway a year ago, when we know what is happening in Syria, when we see what is happening in Gaza and Sderot and in different parts of the world – we remember young people and children who lose their lives.”

Ashton said her remarks had been “distorted” and that she drew “no parallel no parallel whatsoever between the circumstances of the Toulouse attack and the situation in Gaza.”