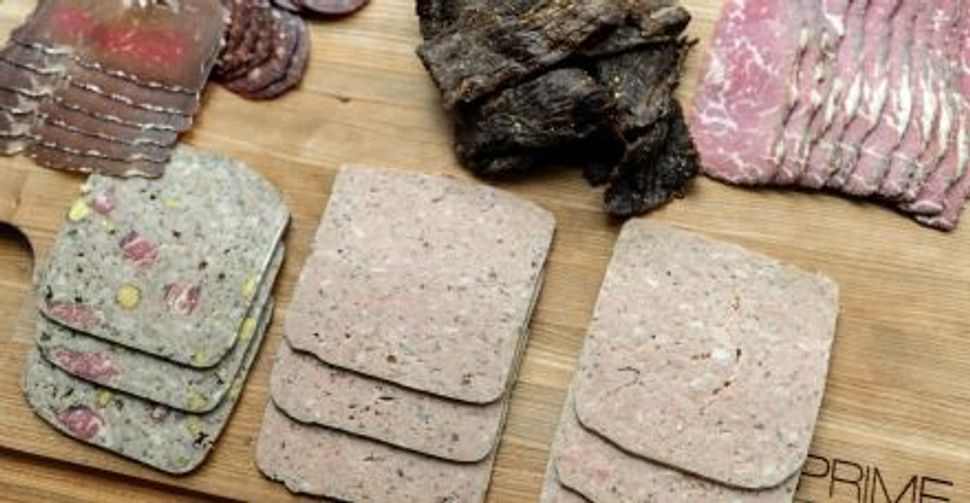 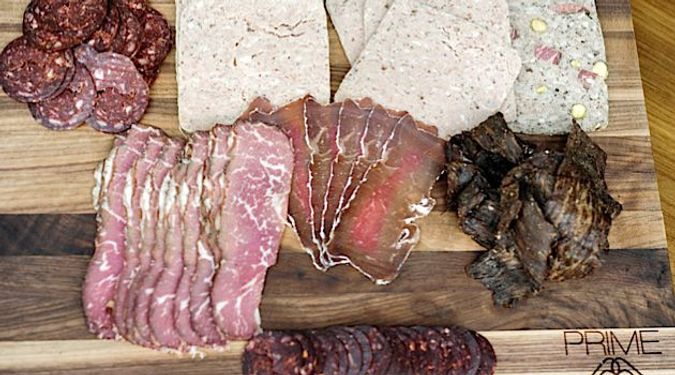 More Than Deli: The charcuterie board at the Prime Grill borrows from French tradition. Image by daniel krieger

Holding a thinly sliced piece of prosciutto between two of her fingers, Marina, my Italian host mother, declared, “Dai, provalo!” Come on, try it!

It was my first night living in Italy for a semester abroad, and I arrived as a kosher-keeping vegetarian. I hadn’t eaten any meat, let alone pork, for nearly four years, and staring me in the face was an eager Italian woman holding out a slice of cured hog.

In that moment, I took a leap of faith. I figured that the phrase “When in Rome…” seemed particularly apt, even if I was living in a small town several hours north of the capital.

The prosciutto was supple and salty with a hint of sweetness. It practically melted on my tongue as the fatty edges left a lingering silken feeling in my mouth.

As I ate the meat, I felt — like so many other modern American Jews who have struggled with kashrut observance — guilty and seduced by one of the kitchen’s most profoundly intense flavors.

Successfully imitating the flavor and texture of cured pork is ironically the Holy Grail of many a kosher chef. There are enough stories of chefs trying to make kosher bacon taste like pork bacon to fill a book (or two, or three). But, until recently, few kosher chefs explored what I experienced in Italy — the world of salumi, known more commonly by its French name, charcuterie.

The word charcuterie roughly translates as “cooked meat.” Curing meat to preserve it is a culinary tradition that is as old as the Roman Empire. French cooks and butchers transformed the custom from necessity to delicacy. Customarily, charcuterie includes numerous varieties of cured pork — like air-dried sausages and prosciutto — as well as pâtes and bresaola (an air-dried salted preparation of beef). The meats are often served thinly sliced with only the simplest accompaniments — bread and sometimes mustard, cheese, cornichons or olives.

Today, innovative chefs like David Kolotkin at Manhattan restaurant The Prime Grill, who added a charcuterie board to his menu eight months ago, are trying to create a kosher equivalent of the carnivore’s delight. Kolotkin explained: “I’m always trying to give my clientele flavors they can’t have.” And he does a good (though very salty) job of that.

Kolotkin’s 12-inch-wide wooden cutting board is artfully topped with house-made meats like air-dried salami, spicy pepperoni and beef bresaola that are sliced so thin they appear shaved. A rich veal country-style pâte, a small ramekin of whole grain mustard, a few gherkins and spicy cherry peppers and a basket of grilled bread round out the traditional presentation.

Jose Meirelles, chef and owner of Manhattan’s Le Marais, who long ago added a kosher charcuterie board to his menu to mimic the one he offered at his old non-kosher French restaurant, Les Halles, echoed Kolotkin’s desire to make the flavors of charcuterie accessible to kosher diners.

Other chefs see charcuterie differently. “As a chef I don’t think it’s my job to trick someone,” Chef Chaim Davids told me in a telephone interview from Jerusalem. When Davids opened the now-shuttered Bay Area restaurant The Kitchen Table in 2009, he dubbed a platter of cured meats like Tuscan salume and maple-cured lamb breast a “koshuterie plate.” Instead of trying to mimic the flavor of pork, Davids celebrated the flavors of the meats he could use. As a chef who came to religion later in life, Davids told me: God created the flavors as they are and “your job as a chef is to not screw it up.”

Perhaps no chef of a kosher restaurant is as intimately familiar with the flavor of pork as Michael Solomonov, who will open the kosher restaurant Citron and Rose outside of Philadelphia later this summer. Solmonov, chef of the acclaimed Israeli restaurant Zahav is also the owner of Percy Street Barbeque — whose menu includes a country ham plate, along with pork cheeks, belly and ribs. (Because Solomonov owns a non-kosher restaurant, he will technically “consult,” and not own, Citron and Rose in order to stay with in line with kosher restrictions.)

Citron and Rose’s team will be “experimenting with different kosher salamis and sausages, air-cured loins of beef, duck and goose. And probably some plays on chicken liver,” he told me in April.

Despite Solomonov’s experience with the hog, he won’t be looking to recreate its flavor. Rather, he is working as part chef and part culinary preservationist looking to revive disappearing recipes and customs of Jewish charcuterie from Europe.

On a recent research trip to Jewish restaurants and butcher shops in Budapest and Paris, Solomonov sampled goose breast prepared like bresaola in a private home. In Paris at a Jewish charcuterie shop in the Marais neighborhood, he snacked on cured veal breast and at another stop sampled luscious chopped liver topped with a balsamic gelée. These dishes and others will inspire his menu at Citron and Rose.

When I spoke with Jewish food historian and writer Joan Nathan about Jewish charcuterie she explained that Italian and French Jews developed their own traditions of kosher charcuterie, substituting goose, duck and at times beef for pork. Jews who moved to Alsace between the World Wars created a particularly rich tradition of cured meats. In “Quiches, Kugels and Couscous,” Nathan’s most recent cookbook on French Jewish cuisine, she quotes the 1929 book “Gastronomie Juive”: “Enter a Russian or Alsatian Jewish pastry-charcuterie shop and see beautiful beef tongues, pink and velvety smoked meat or pickelfleisch veined with yellow fat, preserved goose breasts… salamis and pyramids of sausages.”

Throughout Europe, Jews developed their own traditions of cured meat. And, while deli has reigned supreme in the arena of Jewish cured meats in America, that wasn’t the case as recently as a century ago, according to David Sax, author of “Save the Deli.” When waves of Jewish immigrants arrived in the 1880s and ’90s they brought with them numerous types of smoked and cured meats from different homelands. “The German meats were different from the Polish meats and so on,” explained Sax. But things changed: “It was all about quantity and scale. Cured goose and duck… gave way to beef because it was more plentiful here.” Both the deli and the communities’ tastes evolved.

Chef Mark Spangenthal, of Kutsher’s Tribeca, a contemporary Jewish restaurant in Manhattan, has created a savory bridge between the two curing traditions, perfectly suited for the forward-thinking American Jewish diner. His “deli charcuterie” platter includes house-cured beef and duck pastrami, smoked veal tongue and spicy salami that arrive thickly, though carefully, sliced on a wooden board. “We treat it like charcuterie, but it’s delicatessen meats,” he said.

The flavor of these Jewish charcuteries may be different from what I tried that night in Italy, but when done well, they are just as luscious, profoundly full of flavor and seductive as a mouthful of that prosciutto — only without the guilt. So now I say to you, “Dai, provalo!”

Devra Ferst is the Food Editor of the Forward. Contact her at [email protected] and on twitter @devraferst