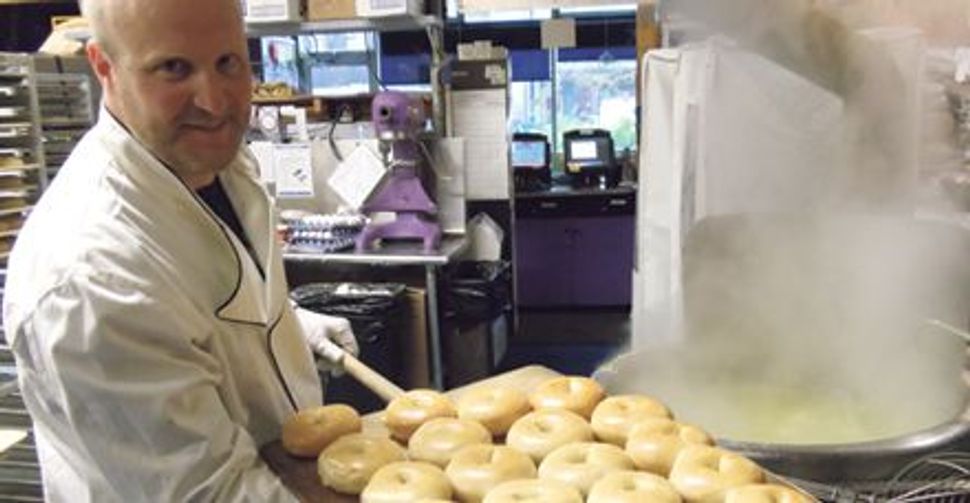 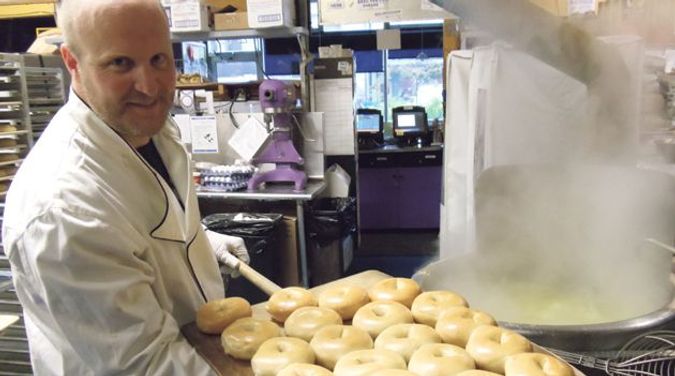 Among the many things I’d resigned myself to leaving behind when my wife and I moved to Alaska from New York City — family and friends, Yankee Stadium, never having to drive — bagels topped the list.

And I don’t mean the fluffy, soft roll-with-a-hole available at every Starbucks on earth. I’m talking about a real New York bagel: firm and shiny on the outside, dense and chewy on the inside, no toasting necessary.

Imagine my surprise to find this doughy comfort food in Juneau (aka the Upper Upper Upper West Side), a tiny strip of civilization sandwiched between the Pacific Ocean and a 1,500 square-mile ice field.

And yet, Silverbow Bagels, owned by husband-wife duo Ken Alper and Jill Ramiel, has now been supplying Alaska’s capital city with traditional kettle-boiled bagels for 15 years. In fact, Alper, 46, and Ramiel, 44 — from New Jersey and Staten Island, respectively — bake such an authentic bagel that my parents, who recently relocated to Southern California, tote dozens back with them after visits. (My in-laws still live in the Bronx, so they don’t need to do that.)

“We wanted a taste of home,” Ramiel said one recent afternoon. “Of course, we had no clue what we were about to undertake. It’s phenomenal we stayed married.”

Looking for adventure, and emboldened by summer work in Alaska’s tourism industry, the two moved to Juneau permanently in the early 1990s after completing graduate studies at the University of Washington. Initially, the notion was to open a luncheonette, itself risky in a town where both Taco Bell and McDonald’s franchises folded. But they fell in love with the 98-year-old Messerschmidt Building, which has housed a bakery in one form or another since 1902. This makes Silverbow, named for the site of Juneau’s earliest gold discovery, the oldest continuously operating bakery in the state.

“Two Jews buying a bakery — naturally, our thoughts turned to bagels,” Alper said about the couple’s decision to buy the space in 1996.

“And they had to be real,” Ramiel added. “We couldn’t do it any other way. Our mothers would’ve disowned us.”

But their desire to produce authentic bagels was quickly met with challenges. There was their lack of experience; a scarcity of traditional bagel-making equipment, like ovens or kettles, and the fact that few baking supply companies shipped to Alaska, especially considering that no roads lead into or out of Juneau. Equipment brokers and ingredient wholesalers kept pushing the “modern way” of bagel baking, in which prefabricated or from-mix bagels are steamed instead of boiled.

Learn five Jewish facts about Alaska you never knew before.

But Alper and Ramiel stood steadfast in their resolve to introduce Juneau to its first New York bagel — as Alper puts it, “You don’t move all the way to Alaska to do something expedient” — ultimately piecing together hardware from independent bagel shops in the Lower 48 that were forced out of business by industrial bagels.

Embracing Alaska’s do-it-yourself spirit, the couple renovated the space and refurbished the gear themselves, with help from friends. Most notably, they enlisted Alper’s childhood pal Rick Leibowitz, a bagel shop owner in New Jersey, to consult on their kitchen, their process and their recipe.

“Our bagel is Rick’s bagel,” Alper said, offering several other explanations for their quality. “We also use barley malt, which a lot of people skip. And then there’s the water.”

It turned out that Juneau’s water comes directly from glacier and snowmelt, with a mineral content similar to the Catskills reservoirs that supply New York.

Silverbow Bagels opened in 1997, with only two items on the menu: bagels with or without a schmear, and chocolate chip cookies. And while this excited Juneau’s modest Jewish community (roughly 300 of a total population of 30,000) —Silverbow counts among its earliest devotees Jay Rabinowitz, former chief justice of the Alaska Supreme Court — Alper and Ramiel quickly learned the difficulty of running a niche business in a small, isolated place.

“Back east, everyone buys bagels by the dozen; here, hardly anyone does,” said Ramiel, who was also surprised to find Sunday their least busy day.

“Nobody came in, and I mean nobody. But it was unfathomable for us not to open on Sunday mornings, so we just ignored the fact that it was empty.”

But there were good surprises, too. Silverbow’s Friday challah — Ramiel’s mother’s recipe — quickly became popular with non-Jews, especially Juneau’s substantial Filipino community, which consistently buys the bulk of the batch because of its similarity to the traditional Filipino egg bread ensaimada.

Over the years, through trial and error, Alper and Ramiel adapted their menu to include a variety of breakfast, lunch and dinner options. They also cater events, like our son’s bris, for instance. And the lox? That comes from wild Bristol Bay sockeye salmon, brined and cold smoked by a local commercial fisherman. It’s so good, Alper and Ramiel bring coolers of it back east (don’t tell Zabar’s).

And while Silverbow Bagels has grown into something of a Juneau institution — Sundays eventually picked up, although still not much market for dozens — it remains a challenge purveying products that customers don’t necessarily understand.

“We have the greatest knish recipe,” Ramiel said, by way of example. “But ultimately, we don’t have faith we can sell it. We’d have to call it a ‘potato pocket’ or something.”

“But from-scratch, kettle-boiled bagels will always be our centerpiece,” Alper said.

“It’s not rocket science, but to do it right takes practice, finesse and a lot of attention to details.”

Now all Juneau needs is a Chinese restaurant that stays open on Christmas.

Geoff Kirsch is a freelance writer whose work has appeared in Huffington Post and Adventure Cyclist Magazine and on Comedy Central.