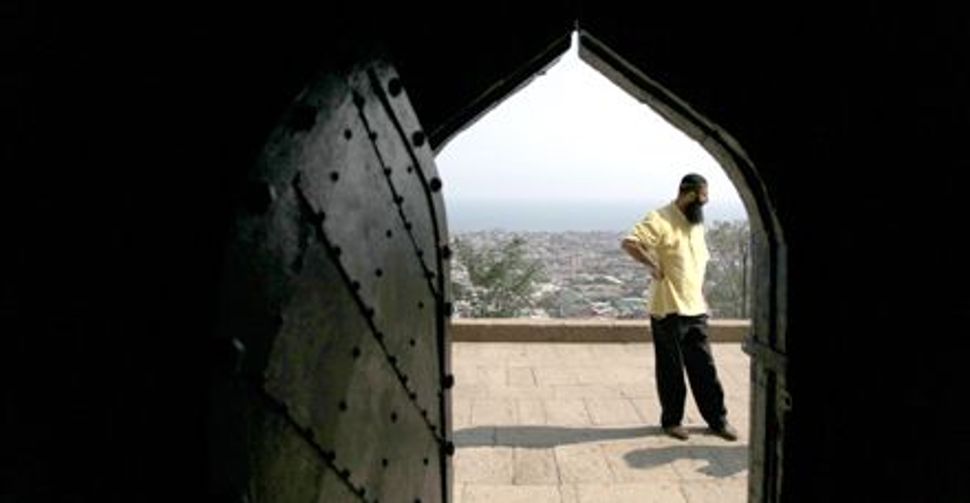 Getting to Friday services in Makhachkala, the capital city of the Russian Republic of Dagestan, was complicated. Three giant bombs had earlier gone off down the road, and authorities had sealed off streets near the synagogue. En route soldiers seized our taxi on suspicion that we were aiding Islamic terrorists. They detained us until Sabbath prayers had long ended.

The following evening we finally made it to the imposing brick building. Shimi Dibyayev, the aged chairman of the community, squired us with a limp through the refurbished facility, whose windows on all three floors were smashed in December 2007. Rebels calling themselves the Shari’ah Jamaat had warned of an assault months prior, yet no one knows for sure who did it.

Dibyayev is ready to take on attackers. “I always carry a pistol and have seven more weapons at home,” he said. “When someone upsets a Jewish person, he goes with two guns.” I did a double-take, because Dibyayev has trouble seeing and hearing, but he assured me: “Of course I’m used to guns. I’m 85 years old, what do you think?”

He certainly needs firepower, like most people in this restive Russian region on the Caspian Sea. A separatist jihad has been simmering for 20 years, since the breakup of the Soviet Union, and Dagestan has become the latest flashpoint in the North Caucasus. Barely a week goes by without another shooting or explosion.

While the rebels mainly target policemen and stores selling alcohol, Russia’s oldest Jewish community is stuck in the crossfire. After 12 centuries of comfortable co-existence with the Muslim majority, the so-called Mountain Jews are fleeing to Israel. Their numbers have gone from 50,000 to 4,780 over two decades, and their unique culture is literally dying out.

“During Soviet times, the Jews lived on four streets here. Now those streets don’t exist,” said Boris Khaiov, at 57 one of the younger members of the minyan. He said that many young people don’t speak Tat, the Mountain Jews’ tongue that blends Farsi and Hebrew much as Yiddish does something comparable with German and Hebrew for Ashkenazi Jews.

That the culture is fading is a loss not just for the Mountain Jews, but also, ironically, for many Dagestanis. The Tats, as they are also known, are so embedded in Dagestan that some Muslims consider them another of the 30-odd clans. Legend has it that the Tats came from Persia at some point, although some amateur historians posit that they were Khazars. Whatever their origin, the Tats gained renown over the centuries for customs not normally associated with Jews, such as cultivating tobacco and wine, and horseback fighting.

Other traditions have endured, such as the kidnapping of brides. Edik Abramov, 45, an amiably bearded technologist from Derbent, Dagestan’s second most important city, was surprised to hear that the practice was uncommon among Jews elsewhere. “Well, the rabbi gave his approval,” he said after giving the matter thought.

Geographic remoteness from Moscow, nearly 1,000 miles away, helped the Tats preserve their culture during Soviet times, when all forms of worship were repressed. Dagestan’s Jews continued to bake matzo for Passover and to light Sabbath candles, far from the crushing anti-Semitism suffered by Ashkenazim closer to the Soviet centers of power.

Most people we spoke to said Jews and Muslims got along today on a social level and the radical fringe was just that.

“Different cultures have lived side by side in Dagestan for years,” said Mufti Ahmed Abdulaev, Dagestan’s Muslim spiritual leader. “This violence stems from ideology and not religion.”

Didydaev downplayed the vandalism of several dozen Jewish graves a few years back, and said the destruction stopped. “Our relations with Muslims are fine. Government ministers are friendly to us. We’ve been here so long, we’re part of the local culture,” he said, adding, “I’ve been to Israel and am much more worried about Jews there.”

The rabbi of Derbent, Ovadiya Isakov, feels more on edge. Someone threw a brick at his bedroom window five years back, just missing his 9-month-old baby. The rabbi stays awake at night worrying about security as well as a dwindling congregation. He energetically promotes a Jewish school for children as well as talmudic studies and [bar mitzvahs] for older youths.

Some are resisting the exodus to Israel, among them economics student Amil Rabiyev, 22. He took a moment from his thrice-daily prayers to reflect on the violence.

The rabbi glanced up sharply.

“I don’t bring them to synagogue,” Rabiyev assured him. “It’s mainly a fashion statement.”

Judith Matloff teaches at the Columbia University Graduate School of Journalism. She is the author of “Home Girl” and “Fragments of a Forgotten War.”