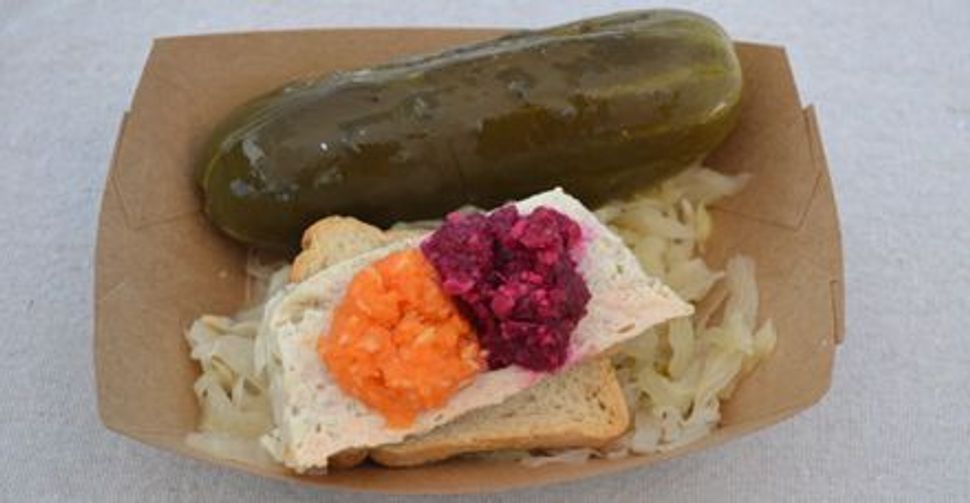 At its origins, gefilte fish was a perfect example of peasant fare, what the Italians call cucina povera, a cuisine designed to extend limited resources across as many table settings as possible. Starting in the Middle Ages until about 60 years ago, balebustes, or skilled homemakers, visited fishmongers to purchase inexpensive fish (some of which lived as family pets in the bathtub before meeting their fate in the kitchen). If they couldn’t afford that, they purchased ground scraps of bottom-feeding fish and mixed them with matzo meal or egg, oil and sometimes onion, stretching the fish to feed their large families.

From the 1960s onward, gefilte fish served in Jewish homes often came from a jar — fist-sized fish balls swimming in a sea of yellow or beige jelly. High on the “ick factor,” as Mitchell Davis, executive vice president of the James Beard Foundation and author of “The Mensch Chef” (Clarkson Potter, 2002) said.

Now, a handful of culinary mavericks in New York City are seeking to elevate gefilte fish’s lowly reputation, albeit with two very different approaches. Riding the Brooklyn artisanal food wave, The Gefilteria company turns out small batches of kosher gefilte fish and sells them online and at weekend food markets. Kutsher’s Tribeca, which describes itself as an “American Jewish bistro” in Lower Manhattan, has created a neo-gefilte, reminiscent of a quenelle, the French poached fish patty.

New York’s nascent gefilte fish experiment is but one component of today’s Jewish culinary revival. House smoked pastrami (and even tongue!) is stuffed into artisan sandwiches in the country’s culinary capitals. Kasha varnishkes is a staple item on the menu of ABC Kitchen, a James Beard Award-winning restaurant. And even Eleven Madison Park, lauded as one of the greatest restaurants in the country, served an egg cream for dessert in the past year — finished with olive oil, of course.

Yet as the food world watches to see whether Jewish cuisine can be elevated to haute fare, gefilte fish stands out from the pack as an unlikely crossover dish. “Among Americans, fishy things are generally not enjoyed,” Davis said.

Can the gray fish ball both beloved and reviled by Jews find a following among picky American palates? And perhaps more important, should one of Jewish cuisine’s most haimish dishes move away from its humble roots in order to gain culinary relevance? For the trio behind The Gefilteria — 20-somethings Jeffrey Yoskowitz, Liz Alpern and Jackie Lilinshtein — the point is not to create a gourmet gefilte necessarily, but to re-create the gefilte fish their ancestors ate, with sustainably sourced ingredients. The “Gefilte Manifesto” on their website proclaims: “We of the Gefilteria plan to bring our foods out of the jar and back to the street, to the pushcarts where we began, to the flavors of the people.”

On a late August morning, I accompanied Yoskowitz to a Hasidic fish monger in Brooklyn to pick up ground whitefish, pike and salmon. As we returned to Yoskowitz’s apartment, Alpern greeted us on the tall brownstone stoop. “Welcome to gefilte world, it’s the world we’re living in!” she said.

The pair were making a small test batch before their Rosh Hashanah run. (Lilinshtein was attending to other business.) As soon as we arrived, Alpern, who previously tested recipes for Jewish cookbook author Joan Nathan, began expertly orchestrating the prep work. The ingredients — onions, fish, eggs, oil, salt, pepper and sugar — were measured out and placed neatly on the kitchen table. Once combined in a food processor, the mixture smelled only mildly like fish, and intensely of onions.

As we carefully folded the fish into loaf pans and tucked it into the oven, Yoskowitz explained how Gefilteria decided on its signature recipe. “We tried everything,” he said: curry, sriracha, herb infused, beet flavored: “It was the Wild West of gefilte production.” Ultimately they settled on a simple but elegant terrine, or pate-style gefilte fish, two-thirds whitefish/pike, with a band of pink salmon on top — a balance between Poland’s sweet gefilte and Russia’s salty one. (A deliberate blend of Yoskowitz’s and Alpern’s respective ancestral homelands.)

As the loaves emerged from the oven, Yoskowitz prepared a simple lunch with items drawn from his veritable fermentation lab of a refrigerator: jars of homemade pickled and fermented beets, sauerkraut, Gefilteria’s carrot and beet horseradishes and small plates of pickles. He added melba toast to the table and, finally, a small loaf of sliced, warm gefilte fish.

The gefilte fish was light, moist and flavorful, but not overly fishy. The horseradish was fiery, with crunchy raw carrots, and the pickles were just briny enough. It was a simple meal, one meant to be enjoyed with a bite of this and a bite of that — an Ashkenazi alternative to a platter of cheese and cured meat. As we ate, I imagined my distant relatives eating the same thing at a summertime picnic in Latvia, 200 years ago.

The meal was a sharp contrast with the gefilte fish I had eaten only a few months earlier at Kutsher’s Tribeca, the upscale restaurant inspired by the Borscht Belt resort of the same name. Much of the ink spilled over the Jewish culinary revival has focused on the gefilte fish at Kutsher’s. It was the topic of a New York magazine article titled “Haute Gefilte: Can Jewish Food Go Upscale?” and featured prominently in the numerous reviews of the restaurant.

At Kutsher’s, the wild halibut gefilte fish is served in silver-dollar sized rounds. It is perfectly plated atop white china; drizzled with parsley vinaigrette, accompanied by a supple beet-and-horseradish tartare, and carefully finished with a small pile of micro greens, a far cry from the lumpy fish-in-a-jar.

The idea behind the dish, owner Zach Kutsher explained, was the same as the concept of the restaurant: to take staples of Jewish cuisine and modernize them. The gefilte fish, he says, is the “the most polarizing” item on the menu. Some diners have loved its transformation, while others say that it is too different from the gefilte of their childhood.

The gefilte fish renewal was the topic of discussion September 6 at a panel at New York’s Center for Jewish History, starring Kutsher, the Gefilteria team, Israeli chef Omer Miller and Jack Lebewohl, owner of the 2nd Avenue Deli, with Davis as the moderator. There was no consensus on the panel — or among the event’s 200 attendees — as to whether gefilte fish should be transformed from haimish to upscale fare. Or as to whether it will make it as a crossover dish, for that matter.

But what was evident was the personal connection each person in the room felt to the dish — whether it was love, hate or nostalgia. “We should be proud of gefilte and its name,” said Naama Shefi, the event organizer. “but variations are welcome.”

Broth:
4 quarts water
Heads, bones and tails from fish (A fishmonger can save these for you if he/she sells you fish as a filet, just ask.)
3 teaspoons salt
3 onions, peeled and roughly chopped (reserve skins)
4 medium carrots
3 tablespoons sugar