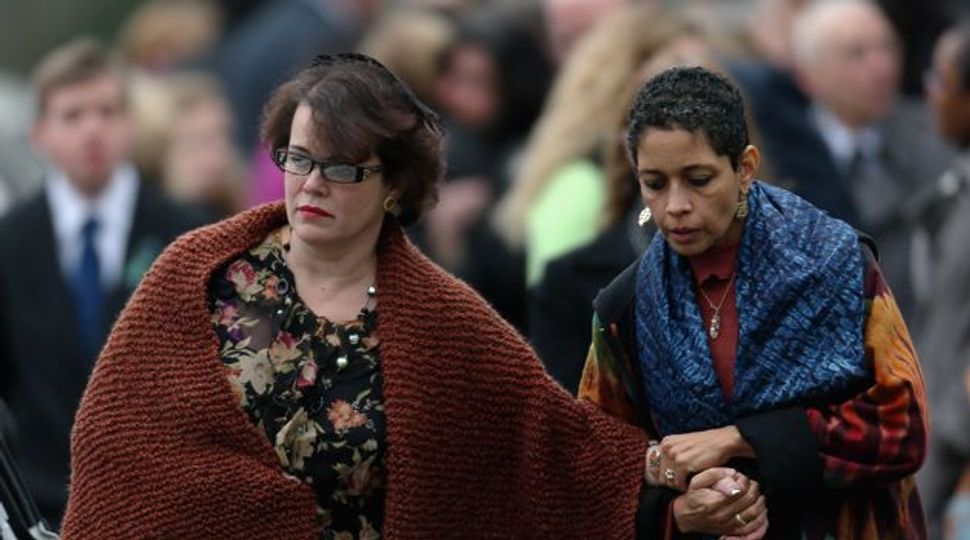 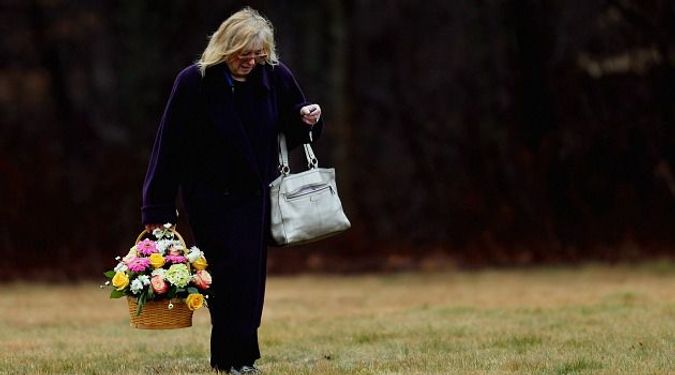 No Words: A grieving woman carries flowers at the funeral for Noah Pozner, who was laid to rest at B?nai Israel Cemetery in Connecticut. Image by getty images

Noah Pozner, the Jewish boy killed in the Newtown school massacre, was laid to rest Monday in the first of a wrenching string of funerals for the victims of the senseless rampage.

The slain boy’s mother, Veronique Pozner, led scores of mourners at a packed funeral home in Fairfied, Conn. that was festooned in white balloons and floral arrangements.

“Every time I told Noah, ‘I love you,’ he always answered, ‘Not as much as I love you,’” his mother, Veronique Pozner, told mourners at his funeral, recalled Rabbi Edgar Gluck after the burial service.

In Noah’s obituary in the Newtown Bee newspaper, his parents and four siblings said, “Noah was an impish, larger-than-life little boy. Everything he did conveyed action and energy through love. He was the light of our family, a little soul devoid of spite and meanness.”

His uncle eulogized Noah as the fun-loving glue that held the family together. The boy loved to joke with his sisters that he secretly worked in a factory making tacos, which he loved to eat. When they called him out, he simply broke into a knowing smile.

“If Noah had not been taken from us, he would have become a great man,” said the uncle, Alexis Haller, of Woodinville, Wash. “He would been a wonderful husband and a loving father. He would have been a backbone of our family for years to come. His loss, and our loss, are deep indeed.”

“Our hearts are with you Noah,” read a sign affixed to a tree. State and local police are lined the street in front of the building. Elected officials mixed with gray-bearded Orthodox Jews and grief-stricken family friends. 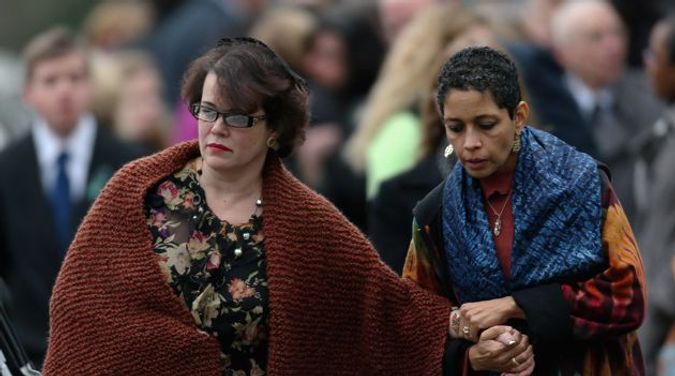 The boy’s older brother, Michael, had to compose himself before offering a eulogy at the funeral, a friend told the New York Times.

“We no longer have a brother,” the friend recalled him saying, “but now we have a guardian angel.”

Veronique Pozner managed to keep her composure as she told of his dreams of becoming a doctor one day.

In a statement, the Pozner family said they were overwhelmed and grateful for all the support “from people from all walks of life, from far and near.”

“Noah, his classmates and the heroic teachers who gave their lives trying to protect them are with God in heaven,” the statement said, according to USA Today. “Now it’s our responsibility to bring heaven down to earth – act by act, good deed by good deed, until we reach the day when no family will need to endure grief and sorrow, the day we reach a world filled with goodness and light.”

A second funeral was being held in Newtown for Jack Pinto, another boy slain when gunman Adam Lanza opened fire at Sandy Hook Elementary School on Friday, killing 27 people before turning the gun on himself.

Noah Pozner’s twin sister and 8-year-old sister were also students at the school, but escaped unhurt.

His family lived in Brooklyn, but moved to Connecticut in search of more safety and better schools.

The family’s rabbi, Shaul Praver, moved many to tears when he sang a Hebrew mourning prayer at the vigil for the victims Sunday night.

The two funerals on Monday ushered in what will be a week of memorial services and burials for the 20 children and six adults massacred at Sandy Hook Elementary School.

Senator Richard Blumenthal and Governor Dannel P. Malloy were among the mourners.

The shooting sent waves of anxiety across the country on the first school day since a 20-year-old gunman opened fire in the close-knit community last week.

Within hours of the school starting bell on Monday, lockdowns were declared in nearby Connecticut and New York towns. And in southern California, Indiana and Tennessee, authorities arrested men on Sunday for making threats against schools.

Newtown’s schools remained closed after a weekend of mourning that followed Adam Lanza’s shooting spree on Friday that claimed 28 lives, including his mother’s and his own.

Miniature caskets marked the first wave of funerals as Noah Pozner and Jack Pinto, both 6 years old, were laid to rest on Monday afternoon. Noah was the youngest victim of rampage and his twin sister, Arielle, escaped unhurt.

Under chilly, leaden skies, police and bomb-sniffing dogs conducted a precautionary search of the street lined with white balloons outside the Fairfield, Connecticut, funeral home where Noah’s brief life was remembered.

“Everything he did conveyed action and energy through love. He was the light of our family, a little soul devoid of spite and meanness,” wrote his parents, Lenny and Veronique Pozner, and four siblings.

At Jack’s funeral in Newtown, about a half dozen children wearing a wrestling’s club gold medals took off the awards and gave them to their teammate’s parents. A New York Giants fan, Jack was wearing a red-and-white jersey with receiver Victor Cruz’s number 80 as he lay in an open white casket at the service. During Sunday’s game, Cruz wore shoes with “R.I.P. Jack Pinto” written on the side.

“Jack was an incredibly loving and vivacious young boy, appreciated by all who knew him for his lively and giving spirit and steely determination,” his parents, Dean and Tricia Pinto, and brother said in his obituary in the Newtown Bee.

Active in sports from football to skiing, he was remembered “for the immeasurable joy he brought to all who had the pleasure of knowing him, a joy whose wide reach belied his six short years.”

Their funerals came a day after President Barack Obama visited Newtown to comfort the families, promising action to stop future tragedies. Obama’s remarks were heralded on Monday morning by relatives of teacher Victoria Soto, 27, who was killed as she tried to protect her first-grade students.

“He really made us feel like she really was a hero and that everyone should know it,” her younger brother, Carlos Soto, told CBS “This Morning.”

Later Monday, White House spokesman said Obama’s plan for action to curb violence includes gun control “but is far from all of it.”

All the dead children were 6 or 7 years old. The school principal of Sandy Hook Elementary, the school psychologist and four teachers were also gunned down.

With Newtown schools closed on Monday, youth sports groups set up an indoor field day to keep children busy on a drizzling Monday. More than 100 children joined in the athletics, board games and arts and crafts.

After killing his mother, Nancy Lanza, at home, Adam Lanza shot his way into the school. He had attended Sandy Hook as a child, according to former classmates, but authorities said on Monday he had no current connection with the school.

Police said Lanza was armed with hundreds of bullets in high-capacity magazines of about 30 rounds each for the Bushmaster AR 15 rifle and two handguns he carried into the school, and had a fourth weapon, a shotgun, in his car outside. He killed himself in the school.

In Washington, a growing number of U.S. lawmakers – including a leading pro-gun senator – called for a look at curbing assault weapons like the one used in the massacre, a sign that attitudes toward gun control could be shifting.

“Never before have we seen our babies slaughtered. This never happened in America, that I can recall, ever seeing this kind of carnage,” said Senator Joe Manchin, a West Virginia Democrat who has earned top marks from the gun industry. “This has changed where we go from here.”