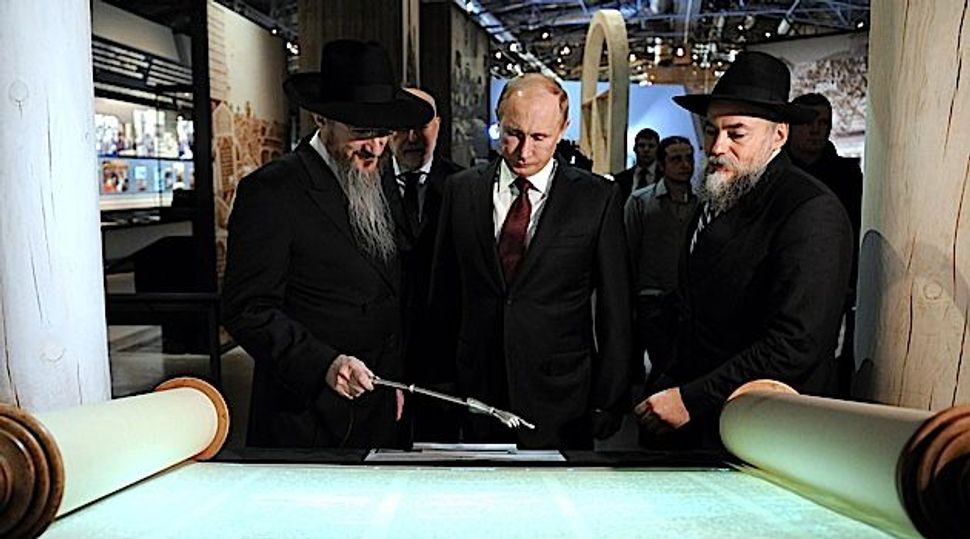 A proposal by Russian President Vladimir Putin for solving a bitter, decades-long legal battle over the late Lubavitcher Rebbe’s library, long held in Moscow, has pitted Russia’s Chabad-Lubavitch community against its U.S. brethren.

Nathan Lewin, the lawyer spearheading the Brooklyn-based Chabad movement’s lawsuit against the Russian state, dismissed Putin’s February 19 suggestion to keep the collection in a Chabad-controlled Jewish library in Moscow. “Chabad is the rightful owner of the collection, and its return to the United States is the only acceptable outcome that is consistent with the clear directives of the [deceased] Lubavitcher rebbe, Rabbi Menachem Mendel Schneerson,” Lewin said in a statement.”

But in an interview with the Forward, Boruch Gorin, a spokesman in Russia for Chabad’s Federation of Jewish Communities, criticized Lewin’s dismissal as “aggressive.” Alluding to anti-Semitism that could be stoked by the Chabad lawsuit, Gorin called Lewin’s dismissal of Putin’s proposed compromise “dangerous [for] the future of the Jewish community in Russia.”

“To answer simply ‘no’ — that looks very strange and, let’s say, not too friendly to Russian Jews,” Gorin said.

Chabad’s followers see the Schneerson Library, a collection of books amassed by the early rabbinic leaders of the Chabad Hasidic movement, as integral to the movement’s religious and spiritual foundation.

Gorin said that Putin’s gesture was the first instance since the collapse of the Soviet Union in which a Russian leader has stated publicly that he is “ready to compromise” on the Schneerson Library.

“I think it’s a very important thing, and we believe it is not only a mistake, but a tragic mistake, not to understand that,” Gorin said.

He said that Berel Lazar, Chabad’s chief rabbi in Russia, has written to Chabad leaders in the United States, urging a face-to-face meeting in America to discuss the matter.

The Schneerson Library is one-half of the so-called Schneerson Collection, which has been the subject of an acrimonious and drawn-out legal battle between Chabad and the Russian state.

The library consists of thousands of books amassed by the first five leaders of the Chabad-Lubavitch movement, which was based throughout most of the 19th century in Lyubavichi, Russia. The Bolsheviks seized the library during the Russian Revolution and nationalized it.

The other half of the collection is the Schneerson archive — books and manuscripts and handwritten documents of the sixth Lubavitcher rebbe, Rabbi Yosef Yitzchak Schneersohn, who escaped Eastern Europe at the start of World War II. The archive was seized by the Nazis and then captured by the Red Army.

Chabad has sought for the library and archive to be returned as a single entity, but Gorin believes that this would be a mistake.

He said that Chabad in America ought to concentrate on seeking the return of the archive, given earlier precedents for the return of Nazi-looted property to its owners.

Russia has been much more reticent to release property seized by the Bolsheviks, especially overseas. In recent years, the Kremlin’s return of property to the Russian Orthodox Church, including churches, monasteries and religious items, has been highly controversial.

Gorin said that Putin’s suggestion for the articles seized by the Bolsheviks — to be housed in Moscow’s Jewish Museum and Tolerance Center — was a good compromise.

The $50 million museum, which opened to great fanfare last November, was bankrolled by oligarchs close to the Kremlin and is controlled by Chabad in Russia.

Gorin said that Putin’s statement came in response to a question from Viktor Vekselberg, one of Russia’s richest men and a prominent backer of Moscow’s Jewish museum, during Putin’s first visit there. Putin said that repatriating property seized by the Bolsheviks during and after the Russian Revolution to overseas organizations could open a “Pandora’s box,” given the massive volume of other properties the revolutionaries had nationalized. But he was open to the idea of the library being “placed on the center’s premises.”

Agudas Chasidei Chabad, the umbrella organization of the international Chabad-Lubavitch movement, has fought for decades to retrieve the Schneerson Collection from Russia. In recent years, the lawsuits have strained already delicate relations between the United States and Russia.

Two years ago, a federal judge in Washington ruled that the collection had to be returned to Chabad. As a result, the Russian government told Russian museums to stop lending artwork to American institutions in case Chabad’s lawyers seized them.

This past January, Royce Lamberth, chief judge of the U.S. District Court for the District of Columbia, imposed a $50,000-a-day fine on the Russian government for each day that it does not return the collection.

The following month, Russia’s foreign ministry suggested that the Russian State Library sue the Library of Congress for the return of seven books from the Schneerson Library that it loaned to Washington during the mid-1990s.

Meanwhile, at the end of past year, the U.S. Congress passed the Magnitsky Act, a bill that imposed financial and travel restrictions on prominent Russians implicated in the death of Sergei Magnitsky, a Russian whistleblower who died in a Moscow jail. In retaliation, Russia passed a law banning Americans from adopting Russian children.

American officials have tried to distance themselves from the Chabad lawsuit, even appealing to Lamberth that fining Russia could be counterproductive to getting back the Schneerson Collection. But Russian diplomats, quoted by the Kremlin-backed Russia Today at the beginning of February, accused American officials of moving “sluggishly” on the issue.

That’s why it was significant that shortly after Putin suggested moving the Schneerson Library to Moscow’s Jewish museum, there was an apparent thaw in rhetoric coming from the Kremlin. Vladimir Medinsky, Russia’s culture minister, told the Interfax news agency February 25: “The problem [of the Schneerson Collection] does not lie in relations between Russia and the United States. It lies in relations between Russia and a Jewish community registered in the United States.”

Calls to leaders of Agudas Chasidei Chabad and to Boruch Shlomo Cunin, a Lubavitch rabbi who has been central to the effort to retrieve the Schneerson Collection, were not returned.