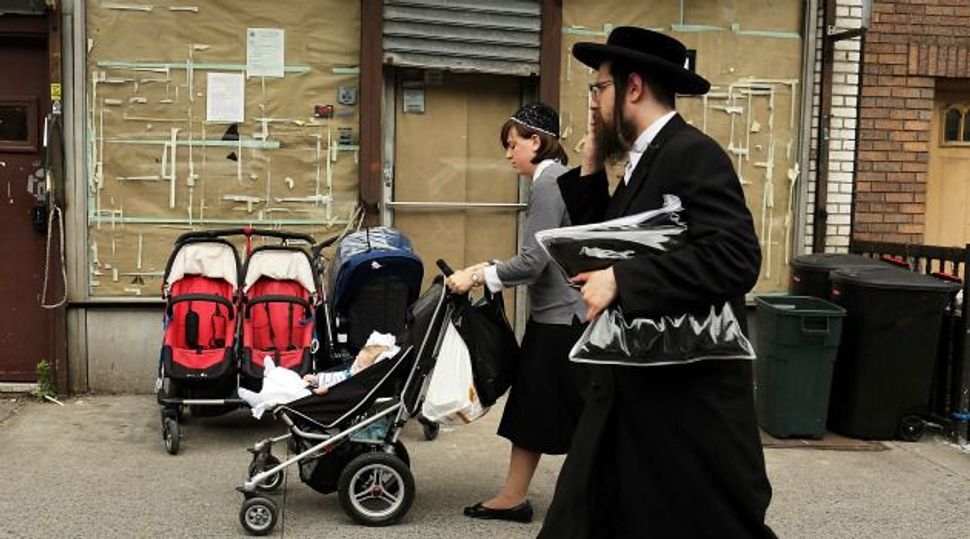 A Father?s Burden: The ultra-Orthodox population in Brooklyn has skyrocketed in recent years because of large families. Image by Getty Images

But I do know what it is like to be a young Hasidic father overwhelmed by the lack of choice of a different kind.

Judy’s articles sparked heated discussion about motherhood and women’s roles in the Haredi world, with other bloggers and commenters adding passionate views of their own. This is an important and necessary discussion.

But as I was reading it all, I couldn’t help thinking of the flip side of it, a side we rarely hear about: That of the unprepared Hasidic young man. Barely in his 20s, already with one or two kids and perhaps another on the way, he realizes with a jolt that it’s his responsibility to figure out how to feed, clothe, house, pay tuition and wedding expenses for a dozen or so offspring. With zero marketable skills, limited command of English, and Section 8 slots in limited supply, his is not a burden easily carried.

And birth control isn’t an option for him any more than it is for his wife.

I remember what it was like for me. I was 21, married for two-and-a-half years, and a student at the kolel — yeshiva for married men — in our Hasidic village in Rockland County, N.Y. Our second child had just arrived, 16 months after our first. Rent was overdue. We’d maxed out our credit at the supermarket, the fish market and the butcher. A seemingly endless list of expenses was weighing us down.

It all seemed so sudden, and no one had told me that $430 a month — the amount of my monthly kolel stipend — would not suffice for a growing family.

I remember the panic, anxiety and depression that followed for a long time after, as another and yet another bundle of joy arrived. Each child was a blessing, of course. But how was I going to provide for so many blessings?

My wife sympathized, but it wasn’t her job to figure out the finances. She made the babies and cared for them. Paying for it was my job — except I had no idea how it was done.

I remember speaking to my rabbis and mentors about this. They offered thoughtful advice on whether it was time to give up full-time study at the kolel and begin my career as a supermarket cashier, or running deliveries for the fish market.

Some thought there might be openings for schoolteachers at the cheder, and while I was probably too young for a full-time position, I could do substituting jobs for several years and if I stuck around long enough, I could probably have a full time position before the arrival of our sixth child or so.

The one thing that no one mentioned: birth control. I didn’t know the thing even existed.

Once, back when my then-wife and I were expecting our first child, I overheard an acquaintance say that in Boro Park — a comparatively liberal Hasidic community in Brooklyn — people had fewer children than in other places. Eight instead of 12, the person said. I was baffled, but too embarrassed to ask the question burning in my mind: How do they do it?

I was ready to disregard the prohibition, to “cut out the middleman,” as the saying goes, and use contraceptives without rabbinic permission. My wife, however, wouldn’t hear of it.

We are accustomed these days to hearing of Hasidic women facing a lack of choices, reproductive choices being one of the most significant. We have deep reservoirs of cultural sympathy for such women, as well we should. But we hear less about the lack of choice available to Hasidic men, which can be similarly devastating — not just to the men themselves, but to their entire families. And in some cases, it comes with a twist that turns the usual narrative on its head.

After three children, I decided it was the responsible thing to take a break. My wife — pious, strong-willed, and obedient to the rabbis and tradition to a fault — would not consider any form of birth control without rabbinic permission. Since our rabbi wouldn’t permit it, any rabbi who would was, ipso facto, not a good enough rabbi.

After our fourth child I tried again to reason with her, to no avail. She cried that she would feel naked if she wasn’t either pregnant or pushing a baby stroller. “People will look at me funny,” she said. I sympathized. Who wants to be looked at funny?

After our fifth, I used the nuclear option. We wouldn’t have sex unless we settled the matter.

And so my wife agreed for me to ask a rabbi outside of our own community, who, I had heard, granted permission easily.

“What is the problem?” the rabbi wanted to know when I went to see him in the basement study of his Monsey ranch house. Large photos of Lithuanian sages graced the walls, as if to remind both rabbi and supplicant who was the real authority in the room.

The problem, I told the rabbi, was that I didn’t think it sensible to keep having children without a proper financial plan. I was stressed with the burden of providing for five. How was I going to provide for six, 12, or 17?

The rabbi tapped his fingers impatiently on his desk. “Parnose kumt fun himl,” he said in Litvish-accented Yiddish. Sustenance comes from heaven. Such matters were not the concern of mortals.

This was unexpected. I had been told this rabbi was easy. This was easy?

But I wouldn’t leave without a dispensation. And so I lied. I told the rabbi that my wife couldn’t take it any longer, that she was emotionally and physically spent, and that she needed a break. I told him that she was suffering from depression and a variety of other ailments.

None of that was true. But now it was easy.

He promptly proceeded to explain what’s what. “Condoms are never permitted. But she can use spermicide gel, contraceptive pills, or an IUD.” He gave me the rundown on how they all worked, as if he were a doctor. Then he added the qualifier: “She can use it for a year or two. Then come back and we’ll discuss it further.”

I left almost gleeful. This was easy. All I’d had to do was put it on her.

The rabbi’s ruling was suspiciously vague, though. Halacha is often concerned with very precise measurements; times (for prayer and start of Shabbat), distances (for things like an eruv techumin), size, weight, and volume (for things like a kiddush cup or an etrog). Rarely does Halacha give the kind of leeway he gave. “A year or two.” As if to say: Wink, wink, this one’s kinda up to you.

And that’s what I told my still-pious wife when the two years were up and she insisted I go back to the rabbi. I wasn’t going back, I said. We’d now been married more than a decade, and I had a decent job as a self-taught software developer for a midtown Manhattan firm. We had a house, and a car and five children who were not only true blessings but were also reasonably well provided for. I wasn’t prepared to change that.

Unlike Judy Brown and other Hasidic women who chafe under the intense pressures of motherhood, my wife wanted more. It was I who didn’t. But I sympathized with her. As Judy writes: “After a lifetime of indoctrination it is nearly impossible for most women to realize that they can be good mothers with the maternal instincts we all share with three children and no more.” The pressure to keep procreating is enormous, and my wife simply wanted to do as she was taught and as all the women around her were doing.

But not all want to do as is expected of them, and, as Judy goes on to say, “they have a right to say, ‘Enough,’ after less then six pregnancies.”

I agree. I would only add that men too have not only that right, but that responsibility. And it is time that, too, became part of the discussion.

Shulem Deen is a former Skverer Hasid and the founding editor of Unpious.com.. His book about losing his faith is forthcoming from Graywolf Press in 2014.