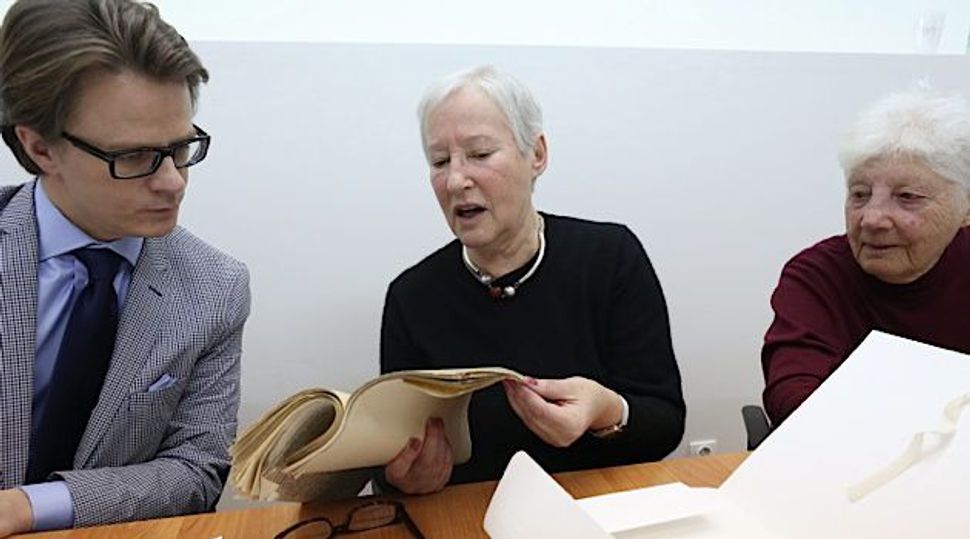 Literary Reunion: Ina Lancman (center) and Vita Serf leaf through the writings of their father, Naftali Herts Kon, at the Warsaw City Archives in March. Tomasz Koncewicz (left) is the lawyer who argued their case. Image by Agencja gazeta

On both occasions that the KGB arrested the Yiddish writer and poet Naftali Herts Kon, it burned his writings. When Kon escaped from the Soviet Union to Poland in 1959, he thought everything would be different — but it wasn’t. When the Polish Communists arrested Kon in 1960, they simply confiscated his writings and refused to give them back. Once more, Kon had lost hundreds of pages of poems and letters.

Even after prosecutors dropped the trumped-up charges against Kon, a Polish court twice refused to return his works. Kon immigrated to Israel in 1965, bereft. “I remember him despairing over it,” Kon’s daughter, Ina Lancman, 71, told the Forward recently. “He left Poland without ever hoping to get [his papers] back.”

Today, Kon’s papers are once again with his family. After a decade of persistent questioning of Polish authorities and a two-year battle through the Polish courts, they sit in 15 manila folders atop a dining table in Lancman’s apartment in Queens. For the family, Lancman said, “it’s a little bit of belated justice.”

Tomasz Koncewicz, the Polish lawyer who represented Lancman in the fight for her father’s papers, believes his victory may provide hope for other Jewish families and institutions that have fought years-long campaigns for the return of their collections from Poland.

Koncewicz, a law professor at Gdansk University, said that although Lancman’s case was unique, other families could use his arguments as a starting point for building a strategy in their own restitution case. “It might have huge ramifications,” he said.

Wesley Fisher, a director of research at the Conference on Jewish Material Claims Against Germany, said that Lancman’s victory is a coup in Poland where belongings usually return only “with tremendous difficulty and at great expense.”

Lancman has short, white hair and the air of someone who does not give in easily. She said that as a child in the “brainwashed” atmosphere of the Soviet Union, she chafed at authority. “Maybe it was my father’s genes,” she said, “because he was always very defiant against the predominant way of doing things.”

Lancman was born in Kazakhstan during World War II. After the war ended, her parents returned to their home in Chernivtsi, a historic town framed by the Carpathian Mountains in what is now Western Ukraine. When she was 7 years old, her father was arrested as part of a crackdown on the Jewish Anti-Fascist Committee, a wartime organization that Stalin grew to distrust during the late 1940s. 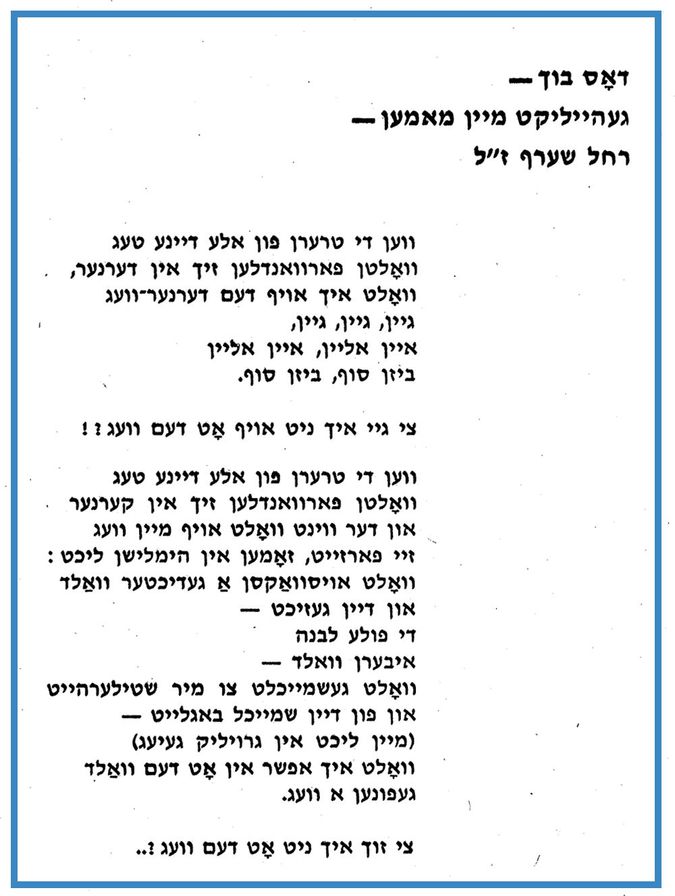 Kon was no stranger to imprisonment. Born in 1910, he spent his youth in several Eastern European towns and cities. He was arrested once in Chernivtsi, which at that time was a part of Romania, for his political views, and twice in Warsaw for leftist activities.

It was during his time in Poland that Kon established himself as a prominent member of a group of Yiddish writers, publishing poems and essays in Bundist and Communist newspapers.

During his second prison stint in Poland, he was offered a choice: deportation to Romania, or transfer to the Soviet Union as part of a prisoner exchange.

Kon chose the Soviet Union, believing that a great life awaited him there. He arrived in 1932, full of hope. But he quickly became disillusioned with Stalinism. In 1938 he was arrested and sent to a Siberian labor camp, where his sentence was cut short, in 1941, by the outbreak of war between the Nazis and the Soviets.

Kon’s next arrest, in 1948, was more serious than anything that had come previously. He was sentenced to death, later commuted to 25 years of hard labor, for alleged anti-Soviet writings about the Holocaust in the Jewish Anti-Fascist Committee newspaper Eynikayt. Lancman said that when her father returned from Siberia in 1956, as a result of Khrushchev’s thaw, she almost didn’t recognize him. “He was… severely depressed,” Lancman said. “He wanted to write, and he couldn’t…. He had, of course, nightmares, and he had a feeling that he’s constantly being watched and followed and that he would be arrested again, anytime, any moment.”

The family was allowed to leave the Soviet Union in 1959, thanks to Kon’s wife, Liza, who applied to be repatriated to her native Poland. In Warsaw, Kon found a new Yiddish literary circle and began writing again. “He became himself, full of energy, ideas,” Lancman said. “And he began to work feverishly to make up for lost time.”

During his time in Soviet labor camps, Kon met a kaleidoscope of victims of Soviet repression: academics, party functionaries, everyday people and hardened criminals. Deprived of paper and a pen, he wrote poems by covering a piece of glass with powder used for toothpaste. Kon mixed the paste with water and spread it over the glass, creating a surface that he could write on with his finger. He memorized the poems before wiping the glass clean.

Now, in Poland, he was free to write down those poems permanently for the first time. “He learned a lot of secrets behind Stalin’s crimes,” Lancman said. “And he felt in Poland he can finally start recording it.”

But Kon chose to ignore the limits of democracy in late 1950s Poland, a Communist country and part of the Soviet Bloc. His travels to nearby Romania, Hungary, Bulgaria and Czechoslovakia, filing reports for a Polish-Yiddish newspaper, Folks-shtime, alarmed the authorities. So, too, did his friendship and correspondence with foreigners, particularly Israelis, in Poland and around the world. His activity attracted the attention of the KGB, which sent a spy to Warsaw to befriend and report on the family. Kon was arrested at Christmastime in 1960.

The catalyst for Kon’s arrest was a letter he sent to the Forverts, this paper’s Yiddish language counterpart, in 1960, according to Karen Auerbach, a lecturer in Eastern European Jewish history at Monash University, in Australia. In an essay on Kon, published in Polin magazine, Auerbach writes that the Polish authorities intercepted the article, which was about Romanian anti-Semitism. Kon was arrested and charged with spying for Israel and with “subversive writing.” (The Forverts was the first newspaper to report the arrest of this “acclaimed Jewish writer,” in April 1961.)

Polish prosecutors eventually dropped the spying charges, but Kon was convicted of subversive writing and released from prison in March 1962. He was given permission to leave for Israel a few years later, but he was forced to leave his confiscated papers behind. He died in 1971.

Lancman returned to Poland for the first time in 2004. It took a further six years and several visits before Lancman tracked down and viewed her father’s files at Poland’s Institute of National Remembrance, a not-for-profit dedicated to righting the wrongs of the Nazi and Communist regimes. There she discovered 13 volumes of information about her father, compiled by the Polish secret police.

Lancman noticed that the files contained copies of her father’s writing. She asked a librarian for the originals; the librarian replied that they were most likely in court archives.

“That’s when I realized I would need a lawyer to get to them,” Lancman said.

By chance, a few months later, in 2010 in Queens, she met Koncewicz, who specializes in European human rights cases. Koncewicz had more than a professional interest in Lancman’s case. While studying for his law degree, he lived with his grandmother in Wrocław, Poland. She regaled him with stories about a Jewish girl whom she hid during the war. Koncewicz thought the Lancman case was “something I could do for the memory of my grandmother.”

Lancman assumed it would take only a few months to retrieve her father’s papers, so she was shocked when a Polish judge ruled in 2011 that her father’s material had been confiscated correctly. The judge “basically reiterated the sentence and the sentiment of the Communist court,” Lancman said. “I suddenly no longer saw Poland as a Western country.”

Over the following months, Koncewicz was pushed from court to court. He wrote more than 2,000 pages of legal pleadings. “I really took on the case with all my energy and power because I saw the great symbolic potential,” Koncewicz said. Finally, in October 2012, a judge at the Warsaw Regional Court ruled that the papers had been seized improperly and that they had to be returned from where they were being held at the Polish State Archives.

Lancman flew to Poland with her sister, Vita Serf, in March of this year to collect them.

Lancman said that she intends to donate the papers to the YIVO Institute for Jewish Research, which already has a collection of her father’s work. She also wants to find a researcher who specializes in Yiddish literature and might be interested in using the documents she is amassing to write a book about her father.

Until then, she is left with 320 pages of letters, poems, articles, essays and notes — mostly typed, some handwritten, all in Yiddish, which is illegible to Lancman.

She said that neither of her parents taught her Yiddish, probably because they thought it was dangerous for a girl growing up in the Soviet Union.

“I blame them for not teaching me,” Lancman said, “but at the same time I understand why.”