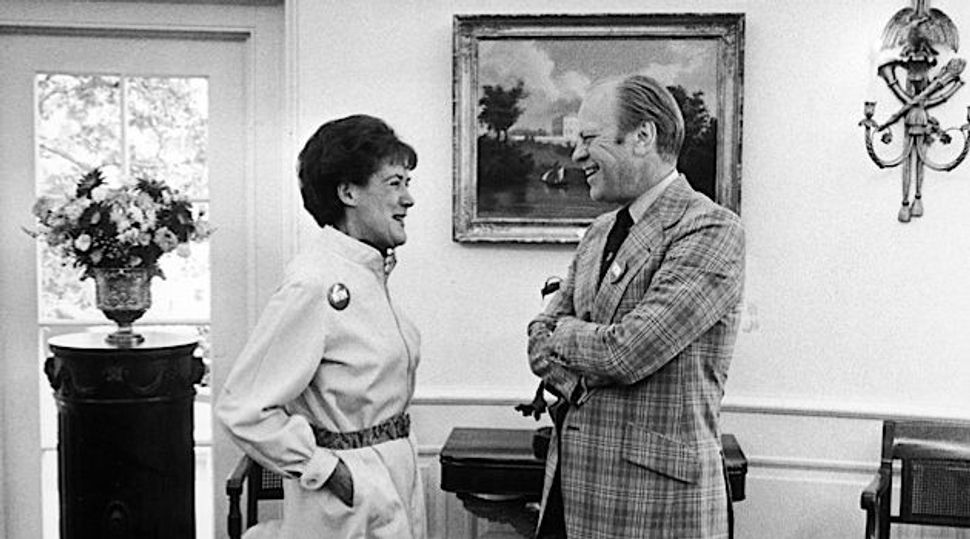 The reveal came on July 20, 1942, when the New York Post’s popular financial column ran under the name of Sylvia Porter. Since starting at the Post seven years earlier, the columnist had hidden behind the gender-ambiguous byline S.F. Porter. At a time when women were banned from the trading floor of the New York Stock Exchange, and kept out of corporate stockholders’ meetings, who would seek out financial advice from someone named Sylvia?

As it turned out, three American presidents, half a dozen U.S. Treasury secretaries and tens of millions of middle-class Americans would seek it. So pervasive was her influence that in 1960, Porter’s image graced the cover of Time magazine.

In a new biography, coinciding with the centennial of her birth, Porter (née Feldman) is credited with creating the personal finance column. Now a mainstay of American business journalism — and a niche in which women have been particularly successful — the personal finance column, which sought to offer up plainspoken financial advice to the masses, was revolutionary back in the 1930s and 1940s. “Here’s what’s going on and here is what you can do to protect yourself,” is how Porter explained her formula.

The stock market crash of 1929, which took place when Porter was a Hunter College freshman, fueled her interest in economics. By the time she graduated and began her reporting career several years later, the field of business journalism had been badly sullied for failing to predict the economic collapse that led to the Great Depression.

After freelancing for financial trade publications, she joined the Post in 1935, covering topics such as government bonds and corporate debt restructuring. She took on ambitious special projects such as a 10-part series about women in finance, and an exposé of the American holdings of IG Farben, a German chemical company fueling Hitler’s war effort. (Infamously, IG Farben manufactured Zyklon B, the deadly gas that was used in the Nazi gas chambers.)

Porter would describe her early work as a “crusade to try to put these economic developments that affect everything we do into language that the average man and woman can not only understand, but will want to read because they are really interested.”

As her following grew, the Post’s executive editor thought it high time to capitalize on the fact that its star columnist — by then, she was also the paper’s financial editor — was a woman. The flurry of media attention that followed the disclosure highlighted Porter’s conventional good looks and her feminine style. She was dubbed the “glamour girl of finance,” with one headline trumpeting: “A Financial Editor Can Be Beautiful!”

The spotlight proved to be a springboard, catapulting Porter from city columnist to nationally recognized financial authority. Her name could soon be relied on to sell books, newsletters and magazines; radio and television reporters regularly sought out her commentary.

In the coming years, a number of U.S. presidents would ask for her help. John F. Kennedy would appoint her to his Consumer Advisory Council; Lyndon B. Johnson would ask her to preside over the Export-Import Bank of the United States, a position she ultimately declined; and Gerald Ford would name her chair of Citizens Action Committee to Fight Inflation.

Tracy Lucht, in her new book, “Sylvia Porter: America’s Original Personal Finance Columnist,” attributes Porter’s success to her ability to “convince both colleagues and readers that although her authority was as valid as a man’s, she was not trying to overturn society.” Lucht, an assistant professor at the Greenlee School of Journalism and Communication at Iowa State University, explores how Porter would shrewdly adapt her arguments to the prevailing gender norms of the day.

In the 1930s and 1940s, she framed her case for women in the workforce in terms of individual liberties and documented how their work buoyed the U.S. war effort. In the conservative postwar years, she attributed women’s march into the workplace to economic need, rather than a desire for self-actualization.

Porter went so far as to suggest that husbands in two-income families ought to pay for larger expenses, such as housing, taxes and insurance, while wives should foot the bill for groceries, at-home entertainment and housekeepers — not your standard feminist rhetoric. But as one of Porter’s former assistants put it: “Sylvia wasn’t really interested in social movements. She was interested in Sylvia.”

And Porter remained interested and interesting until the end, continuing her syndicated newspaper column until two months before she died in 1991, just shy of her 78th birthday, from complications of emphysema.

Lucht’s academic biography provides a fascinating contextual analysis of Porter’s six-decade career in business journalism. By her own admission, she includes few details about Porter’s personal life, making only passing references to the columnist’s fiery personality, heavy drinking, chain smoking, devotion to her Russian immigrant mother, and relationship with her own daughter, Cris. Her motivations, inspirations, challenges and demons remain largely unexplored. So, too, does Porter’s Jewish upbringing on Long Island and her ongoing affiliation, if any, with Judaism or other faith traditions.

Her impact is evident in the work of Jane Bryant Quinn, Suze Orman, Jean Chatzky and other contemporary stars of the personal finance genre she helped create. It can also be seen in the rise of the journalist-as-multimedia celebrity. Porter was the original cross-platform star, honing her personal brand decades before it became de rigueur for scribes to do so.

Gabrielle Birkner is a Forward contributing editor. She is co-founder of Modern Loss, a site geared toward young adults who have lost loved ones.