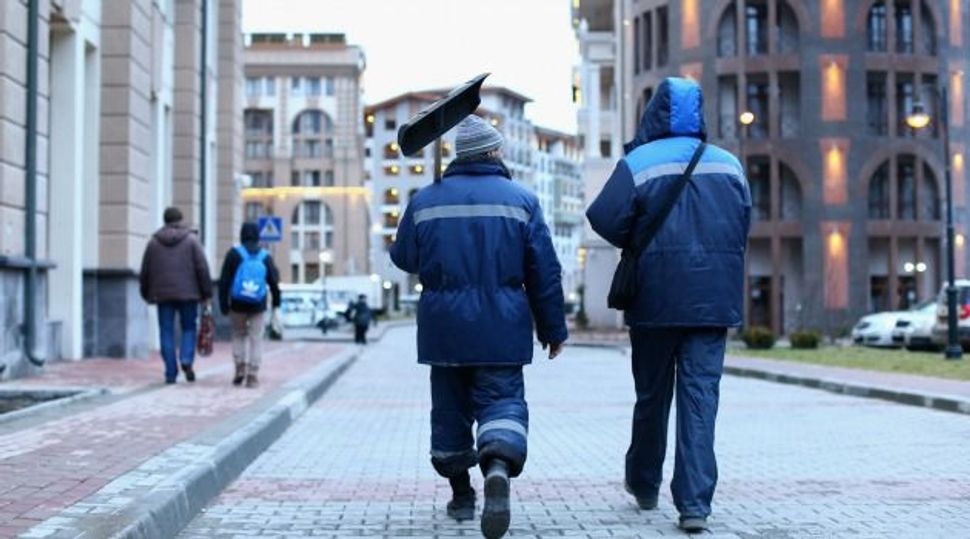 Welcome to Russia! Workmen spruce up Sochi in advance of Winter Olympics opening ceremonies. Chabad is leading an effort to make Jewish visitors feel at home, with kosher food, three shuls and 13 rabbis in the Black Sea resort. Image by getty images

(JTA) — Soft sand and turquoise beaches make Sochi a lovely holiday destination, but this coastal Russian city is less than ideal for providing religious services to thousands of Jewish tourists.

With few native Jews and only one resident rabbi, the Black Sea resort of 400,000 residents would seem ill-equipped to handle the tens of thousands of Jewish visitors expected to arrive here for the 2014 Winter Olympics.

But that has changed over the past year. On Friday, the official opening day of the 2014 games, the city will boast five Jewish information centers, three synagogues and 13 rabbis.

The Jewish infrastructure in Sochi is aimd not only at serving Jewish visitors, but at advertising what the Chabad-affiliated Federation of Jewish Communities of Russia calls a Jewish revival in the former Soviet Union. Boruch Gorin, a senior Chabad rabbi in Moscow, told JTA the Jewish presence in Sochi is meant to function something like an embassy.

“At Sochi, there will be international media, politicians, top athletes,” Gorin said. “It is very important that we show that we are on the map and what is happening to Russian Jewry, its revival.

The Sochi Jewish community began preparing for the games last year, with a massive renovation of the city’s small permanent synagogue and the introduction of a new Torah scroll. This week, the synagogue will host the community’s own opening ceremony with a reception to welcome the Jewish athletes.

As with most things Jewish in Russia today, Jewish services in Sochi are spearheaded by Chabad, which dispatched its first emissaries to the former Soviet Union 20 years ago after the fall of communism. In December, Berel Lazar, the Chabad-affiliated chief rabbi of Russia, announced plans for new synagogues in 12 Russian locales from Kaliningrad, near the Polish border, to Birobidzhan near North Korea. Five new synagogues will open in Moscow alone.

Chabad’s emissaries helped breathe new life not only into established Jewish communities, but also into places like Sochi which, according to Chabad, never had a permanent Jewish community before the 20th century. The growth of the network has made large-scale efforts like Sochi possible.

“Ten years ago, the same sort of effort in Sochi would have been much more difficult and more expensive from a logistical point of view,” Gorin said.

As with the games themselves, which cities often woo in part for their long-term impact on development, Edelkopf, Sochi’s rabbi, hopes the global exposure for his small community will have an enduring effect.

“We hope the exposure and the heightened awareness of Jewish community life will increase long term interest in Jewish life for Sochi Jews and its visitors,” he told JTA.

For Edelkpof, 36, the arrival in Sochi 12 years ago was something of a baptism by fire. Just months after he moved, a Siberia Airlines flight crashed over the Black Sea on its way to Russia from Israel. Many of the 66 passengers aboard were Russian Israelis and Edelkopf, the only rabbi in the area, spent sleepless nights in the morgue helping to identify the victims and acting as the main contact person for families.

His performance was so impressive that Lazar mentioned it during an address at the Knesset in 2011 about the importance of the network of Chabad emissaries.

“Within hours, Rabbi Edelkopf was transformed into a combination of forensics expert and undertaker; a therapist and grief counsellor and the contact person for dozens of Israeli families and with the Israeli government,” Lazar said.