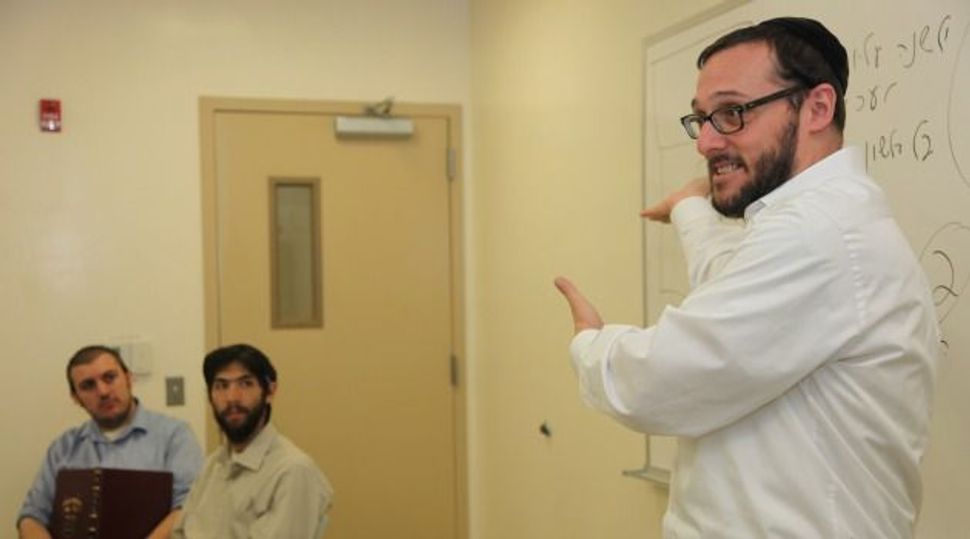 He grew up among the ultra-Orthodox Satmar Jews in the Williamsburg section of Brooklyn, in a childhood with rules so strict that playing Frisbee at summer camp was considered a radical move.

Today he serves as the spiritual leader of a small, relatively young, progressive Orthodox synagogue where women are allowed to open the holy ark, carry Torah scrolls around the women’s section and lead the congregation in some contemporary prayers. In the context of Orthodoxy, these, too, are radical moves.

Rabbi Ysoscher Katz’s gradual, sometimes painful but ultimately successful journey from one end of the Orthodox spectrum to another is a rare example in which a former Hasid is eagerly sharing with non-Hasidic Jews the deep knowledge he gained in the yeshiva world. Katz’s transition could provide a model for disillusioned ultra-Orthodox Jews who long to engage with the modern world without losing their religious identity altogether.

“Rabbi Katz is one of those rare individuals who comes from a world of Torah study and diligent learning, was recognized as a brilliant mind from a young age, yet chose to marry that incredible skill set with a progressive [worldview] within halachic Judaism,” said Jonathan Reich, 34, an attorney and president of The Prospect Heights Shul, which hired Katz after a six-month search.

Katz, 46, is a talmudic scholar raised in the Satmar yeshivas of Williamsburg, and ordained by Satmar Rabbi Yechezkel Roth. That’s a far cry from where he lives now Jewishly: He is the head of Talmud studies at Yeshivat Chovevei Torah, a left-leaning Orthodox rabbinical seminary in the Riverdale section of the Bronx and a leading voice in the delicate process of carving out halachic decisions for progressive Orthodox synagogues like The Prospect Heights Shul, home to about 50 couples and young families.

As Katz takes the helm of the synagogue, he will remain on staff at Chovevei and will continue to live on Manhattan’s Upper West Side with his wife, Sharon Flatto, who is a professor of Jewish studies at Brooklyn College, and their two young sons, Avi and Gavriel. His work as a pulpit rabbi at the Prospect Heights Shul will, in the meantime, remain part time.

Katz says he is excited about his first job as a pulpit rabbi. Sipping a hot decaf in a sleek Midtown Manhattan coffee house recently, he said that his greatest joy will be sitting with his congregants and learning Talmud. “My plan this year is to delve into the laws of shmita,” Katz explained. Shmita, the sabbatical year in the seven-year agricultural cycle mandated by the Torah for the land of Israel, includes laws pertaining to remitted debts and how fruits can be deemed ownerless and therefore picked by anyone.

“I’d like to explore not just how each of these laws plays itself out theologically, but also its ramifications for social justice. V’akhlu evyoni amkho, there should be enough for the poor to eat, too,” he explained.

The progressive values of The Prospect Heights Shul, including the emphasis on helping the poor and on giving women a greater role in the service, are close to his heart, and quite a distance from his formative years in Williamsburg. As a child of a Satmar father and mother who hailed from a different Hasidic sect, called Pupa, young Ysoscher spent every winter and summer in Satmar schools and camps, except two summers when he was sent to a Puppa camp.

“That was considered modern because they let us play Frisbee,” he said, chuckling.

Katz loved learning, and he excelled in his studies. But the more he learned, the more he began to see religious Satmar texts as simplistic and lacking nuance. In the early 1980s, other Satmar yeshiva students were becoming similarly disillusioned and had begun reading more mystical texts from the Lubavitch movement. “Lubavitch was considered by us to be the most sophisticated, creative and courageous of all Hasidic groups,” Katz said.

He began studying the Tanya, the Chabad approach to mysticism, hoping he could keep that a secret from his yeshiva rabbis. But he couldn’t.

“They found books missing from the yeshiva library,” Katz explained. “I had a reputation for being a bibliophile, so they thought I might have stolen it. They broke into my dorm room, looked all over. Didn’t find what they were looking for, but instead found the Tanya under my bed.”

Horrified, the rabbis immediately expelled Katz from the yeshiva. His parents, though supportive and loving, were crushed. They sent him to Jerusalem to study at the Brisk Yeshiva — an odd choice, since that institution was affiliated with the historical Misnaged movement, which for centuries had opposed the Hasidim. After a year at Brisk, Katz came home, was married off and returned to Jerusalem with his new wife to continue his studies. In comparison with his theological disappointment with Satmar, Katz found himself much happier at Brisk, as he took on the yeshiva’s stringent approach to life. “I became very diligent in following the law: no compromises, basically more fanatic,” he said.

The couple eventually returned to the United States and had three children. Katz learned daily in a kollel, a yeshiva for married men, and began leading a daily Talmud class in Brooklyn’s Boro Park for men who work all day. The class grew very popular, attracting 80 to 100 participants from all Hasidic groups and occupations, ranging from financial brokers to gefilte fish purveyors.

At the same time, though, Katz’s marriage began to fall apart. “She was happy, but I wasn’t because it was obvious that we were mismatched,” he explained. “I began to realize that the Satmar system was at fault, because it didn’t value compatibility as a factor in a relationship. Everything we’re supposed to do, including marriage, is in the service of the bashefer [Creator]. The rabbis refused to accept that we are all just human beings.”

Their troubled marriage opened the floodgates for Katz; soon he began to doubt all the other assumptions of the community. “Once I discovered that little crack in the edifice, it all began to crumble,” he said.

It was a painful time. “I was frightened, because leaving the community was a terrifying thought,” he said, especially the possibility that he might lose his three children. “I began feeling suicidal.”

Katz also started noticing the way the Hasidic community viewed its women. “I felt uncomfortable that among us seven siblings, my brothers and I had optimal access to the holy texts, while my sisters and mother, who are all incredibly smart, had no access,” he said.

By age 29, Katz was ready to take his first steps out of the community. Telling no one but his wife, he registered at a teacher education program and then got a stint teaching at an Orthodox high school for girls in New Jersey. Katz was thrilled about the opportunity, but was careful to make sure none of the participants in his Talmud class found out about it. “They would be horrified to know I was teaching women,” he said.

Finally, Katz told his wife that he wanted a divorce. She was devastated. Although she was a Satmar woman, she called on the Skulener Rebbe, a popular figure even among Jews who are not Skulener Hasidim. The rebbe asked her if she had been shaving her head, and she said no. “Then why are you surprised?” he asked.

“When she told me this, I was furious,” Katz said. “First of all, if he knew me at all, he would understand that shaving her head would make things worse, not better, and secondly, how incredibly insensitive it was to make her feel that it was her fault the marriage wasn’t working! Wasn’t she in enough pain already?”

It was then that Katz finally made the break from his community, stepping out into the “wilderness” to find his path as a modern observant Jew.

“Of course, my parents were very upset and we all suffered a lot,” he said. Yet, they never cut off relations with him. “Today they all live in Boro Park. They’re more ‘enlightened’ now.”

Whenever he and his new family visit them these days, they treat them warmly and respectfully. “Of course, when we’re there for Shabbos, I always put on my Satmar wardrobe,” he said. And despite the fact that he is no longer part of the Hasidic world, he is still asked to teach at one of the local Satmar synagogues every time he visits.

Although his first wife has remained Satmar, his three older children are not.

Katz hopes that his transition from Hasid to Modern Orthodox Jew will inspire others contemplating the same path. He and Levi Brackman, a formerly Chabad rabbi in Colorado, founded a website for those who are “Orthodox and stuck” (www.frumandstuck.com), where they offer help to those wishing to leave devoutly observant Jewish communities.

“Honestly, the ghetto walls have collapsed,” Katz said earnestly. “Another prohibition here, another ex-comunication there, the rabbis are trying everything but they know that nothing can stop it. That’s why I want to do whatever I can to help those people who are seeking a different path.”

A version of this story appeared in the Yiddish Forward.