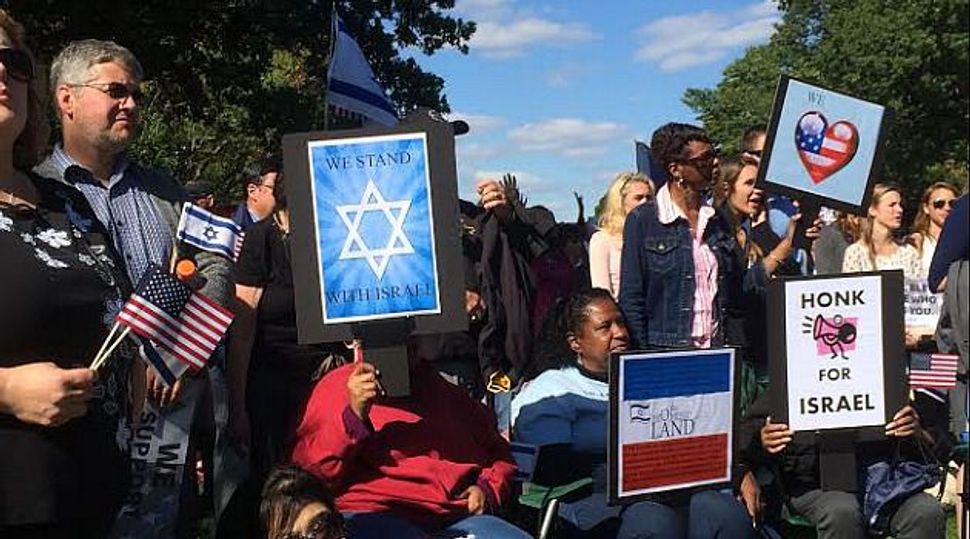 We’re With You: Evangelical Christians cheer Israel at rally in Washington D.C. Image by nathan guttman

Benjamin Netanyahu’s comparison between ISIS and Hamas, repeated in recent weeks from every podium in the U.S. and in every TV network interview, gained little traction with the Obama administration which made clear it does not see the two terror groups as equal.

But it resonated well with at least one audience: Christian supporters of Israel. Several hundreds of them convened on Sunday afternoon on Capitol Hill for a rally in support of Israel. And what they heard from almost all speakers were variations of the Netanyahu equation, comparing ISIS and Hamas, with an added emphasis on how both groups pose a threat to Christians and Jews alike.

The pro-Israel rally was organized by Mike Huckabee, a former governor of Arkansas and a Republican presidential hopeful who now hosts his own Fox News talk show, and by Penny Nance, CEO and president of Concerned Women of America, a prominent Christian conservative women organization.

Together they brought an A-list of conservative speakers to address the relatively small crowd on a sunny Washington afternoon. The message conveyed by all at the footsteps of Capitol Hill was of the shared battle they feel Jews and Christians are engaged in against extremist Islam, of full support for the Israeli government. Speakers also offered endless jabs at President Obama, who was widely portrayed as unsupportive of the Jewish state.

“If America doesn’t stand with Israel, God will remove his love from us,” Huckabee told an audience of supporters waving Israeli and American flags and carrying signs stating their support to Israel and to Jesus.

For the younger participants, many of them bused in from Virginia’s Liberty University, America’s largest evangelical college, the main attraction were brothers David and Jason Benham, the twin real estate entrepreneurs who won fame in conservative circles after their HGTV show was cancelled because of their outspoken views against gay marriage.

“We got fired because we are pro-life and because we are pro-marriage,” said David Benham, standing next to brother Jason, both in Jeans and tight T-shirts. “But we are also pro-Israel.” He later warned that “Satan has waged war against Israel” and that Christians have to stand with Israel.

The only Jewish leader to speak at the event was Morton Klein, national president of the Zionist Organization of America. Klein chose to focus his attack on the Palestinian Authority, calling the Fatah’s coalition agreement with Hamas a “diplomatic kristallnacht,” one of numerous Holocaust references made by speakers at the event. Klein also claimed that “Jerusalem is not holy for Muslims” and that Islam has never viewed it as one of its holy cities.

The Israeli embassy sent deputy chief of mission Reuven Azar to speak on behalf of the government of Israel. Azar carefully avoided stepping into the highly partisan spirit of the event, and focused on the freedoms women and Christians enjoy in Israel as opposed to their treatment in Middle Eastern Muslim countries.

Congresswoman Vicky Hartzler, a Missouri Republican, directed her criticism at what she viewed as the media bias against Israel. Hartzler argued that while the press covered extensively the deaths of Palestinians in Gaza it did not pay equal attention to violent deaths in Chicago and in Portland, Oregon.

Arizona Republican Trent Franks delivered some punches at President Obama for condemning Israel’s East Jerusalem building expansion, but he won cheers from the crowd when greeting the rally organizer Huckabee. “The greatest thing would be to see Mike Huckabee in the White House,” Franks said, reminding all that the evangelical pundit still might throw his hat in the ring.

Huckabee is said to decide about another White House run after the November mid-term elections.