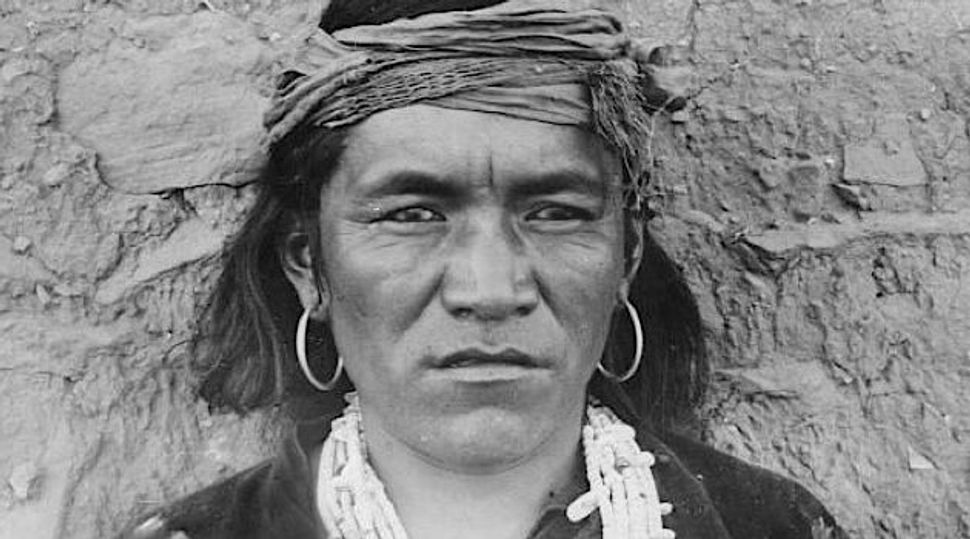 Home of the Brave: Language theory posits that speakers of Navajo do not see the world differently than speakers of English. Image by Getty Images

Not too long ago I found myself in an argument — civilly conducted, I must say — with a friend of one of my daughters, a young man of emphatically liberal views who teaches sociology at a college in Israel. In the name of gender equality, he said, he was careful to address his classes in both masculine and feminine language, so that if, for instance, he asked in a lesson, “Ma atem ḥ oshvim al zeh?,” “What do you think about that?,” using the masculine plural form, he would make sure to phrase the same question the next time as “Mah aten ḥ oshvot al zeh?” using the feminine plural form.

I objected that this was ridiculous. The time-honored Hebrew convention, I said, was that in addressing a sexually mixed group of people, one employs the masculine form, so that a resort to the feminine sounded bizarre. This had nothing to do, I maintained, with sexism. One should not confuse grammatical form with semantic content. The speakers of any language are quite capable of making the distinction between the two, and Hebrew speakers have no trouble understanding that addressing a classroom of 16 women and 11 men in masculine language is a grammatical technicality that does not exclude the women or privilege the men. In Hebrew, to take another example, the word for “father” is av and the word for “woman” is isha, but in the plural av takes the grammatically feminine form of avot while isha takes the masculine form of nashim. Does this mean that Hebrew speakers think of two or more fathers as females and two or more women as males? That would obviously be an absurd conclusion.

I thought of my argument with my daughter’s friend the other day while reading a little book, published this year, by the Columbia University linguist John McWhorter. Titled “The Language Hoax: Why the World Looks the Same in Any Language,” its thesis is essentially identical with the one I have just put forth — namely, that form and content in language are two entirely different things. In making his case, McWhorter chooses dozens of illustrations, ranging from languages as well known as French and German to ones as exotic as Jarawara and Atsugewi, but his point remains the same: Grammar does not dictate the way we conceptualize reality. The fact that Chinese verbs have no tense markers does not mean that Chinese speakers have no sense of time, or that they fail to divide time into past, present and future as do other people. The fact that Tuyuca, spoken by a tribe in the Amazon, grammatically forces (as do a number of languages) the maker of a statement like “He is chopping trees” to indicate whether he (or should I have said “she”?) knows this from personal observation, has deduced it circumstantially, or has heard it from others, does not mean that a Tuyucan would be a more reliable court witness than a Spaniard would be.

The “hoax” of the title of McWhorter’s book is one allegedly propagated by the school of thought that, named after the mid-20th-century American linguist Benjamin Lee Whorf and commonly known as Whorfianism, holds that a language’s grammar does determine the way its speakers picture the world, so that a speaker of Navajo, say, necessarily has a different conception of time, space, causality and other things than does a speaker of English. Without going into the question of how convincing the attempted demolition of Whorfianism is in “The Language Hoax” (in places, the book is annoyingly glib), or into the nuances separating classical Whorfianism, which is today a largely discredited theory, from the neo-Whorfianism that some linguists have sought to replace it with, one can say that McWhorter is defending a liberal, universalist view of humanity. Human experience, he argues, is culturally, not linguistically, determined, and culture is more flexible than language. Even if all of us do not experience everything in the same way, the languages we speak do not prevent us from understanding and bridging the differences between us.

For politically correct liberals like my daughter’s friend, this should be welcome news, but it also poses a problem: If a universalist view of mankind calls for distinguishing linguistic form from content, what difference does it make whether we say atem ḥ oshvim or aten ḥ oshvot, or “he should eat” or “she should eat”? Shouldn’t we in that case respect the conventions of the languages we speak rather than coerce them into change for ideological ends? I’m still waiting for an answer.