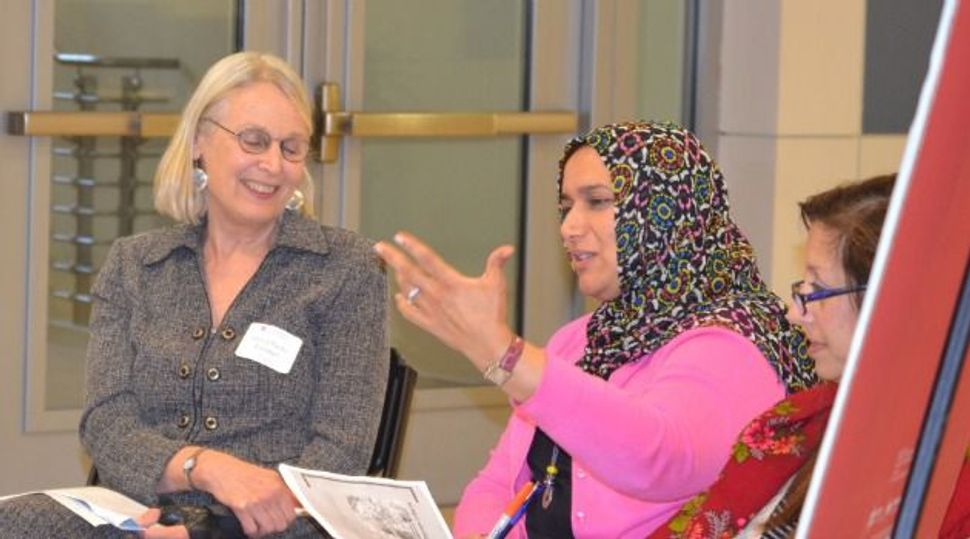 Bridging Gaps: The Sisterhood of Salaam Shalom was founded in 2011 and seeks to engage Muslim and Jewish women in dialogue. Image by The Dialogue Institute

Brenda Naomi Rosenberg had had it with denunciations of Israel, and she told her Muslim dialogue partner so, right to her face.

“Israel has the responsibility to defend itself from Hamas rockets!” she exclaimed.

But Samia Moustapha Bahsoun, a Muslim of Lebanese descent who was raised in Senegal, had had it with that talking point. “By killing children and bombing schools and hospitals?” she countered. “Israel,” Bahsoun pointed out, “killed 2,000 Palestinians in this war! Seventy percent civilians!”

Their voices escalated as the debate continued. And the audience attending the first national conference of the Sisterhood of Salaam Shalom was transfixed. “It seems so real,” one audience member said in reaction.

Bahsoun nodded when told this. “Oh, it is real,” she said. The two women — co-directors and co-founders of Tectonic Leadership, a conflict resolution group — may have been staging a demonstration of what can happen when interfaith dialogue participants really confront the issues that lurk underneath their discussions unaddressed. But Bahsoun explained that she really was upset about the civilian casualties.

“You cannot build bridges without points of tension,” Bahsoun told the group. “Tension holds a lot of information.”

Two months after the war between Israel and Hamas, and Israel’s accompanying invasion of Gaza, that point was a crucial one for the more than 100 women who attended the November 2 conference at Philadelphia’s Temple University. Many women alluded to the “elephant in the room.”

“What’s the point of all this if we can’t talk about this stuff?” asked panelist Rabia Chaudry, a fellow of the Shalom Hartman Institute, in Jerusalem.

The elephant was the conflict in Gaza. Heated Facebook debates and chafed feelings from that time seemed to be fresh in the memories of conference panelists. Sheryl Olitzky, co-founder and executive director of the SOSS, called the disagreements among members “heartbreaking.”

What Bahsoun and Rosenberg offered was the proposition that those willing to dialogue can still be intransigent on what matters most to them. A major tenet of their approach is that one does not change or sacrifice core principles when entering into dialogue with someone from the contending group. What a participant is called on to do is to make room to respect the beliefs of others.

Rosenberg, a committed Zionist, invokes the Holocaust as history’s indelible lesson on the necessity for a State of Israel; Bahsoun, who lost her grandmother and great-aunt to Israeli raids on Southern Lebanon in 1982, resists comparing her ideals, explaining, “commonalities aren’t my thing.” Through Tectonic Leadership the two women seek to model ways to understand the other side’s backgrounds and experiences and the fears they produce, and thereby to help prevent future wars and genocides.

SOSS, a relatively new group, was established in 2011 but formally incorporated less than a year ago. Its conference kicked off an annual weekend of twinning events in the United States and internationally between Muslim and Jewish congregations sponsored by the New York-based Foundation for Ethnic Understanding. The group works closely with the foundation. But SOSS is exclusively for women and aims to establish local chapters of Muslim and Jewish women in interfaith dialogue across the country.

Over the past summer, that goal was tough going, Olitzky said. Amid the war then between Hamas and Israel and Israel’s accompanying invasion of Gaza with huge civilian casualties, four local chapters she was about to launch got put off. “In the brand-new chapters where they hadn’t even built relationships yet, it would’ve been disastrous,” said Olitzky. The four chapters — in Boston, Kansas, Baltimore and Minneapolis — have since gotten off the ground.

The Temple University conference was the first to bring together members from chapters across the country. Atiya Aftab, who co-founded SOSS with Olitzky and serves as chairman of the group’s board of directors, urged the audience during her talk to consider the diversity of the Muslims worldwide. (India and Indonesia together have more Muslims than all of the Middle East and North Africa, according to the Pew Research Center.) Aftab also stressed the long history of Jewish-Muslim relations. She urged her audience to keep that perspective in mind when dealing with recent conflicts.

“We really try to hammer that we’re coming at this from a faith perspective, not the contemporary context,” said Aftab, an Islamic law and jurisprudence professor at Rutgers University.

SOSS considers political discussions a part of its work — but one that can be undertaken only after participants have established trust with each other. To promote Jewish-Muslim relations, its members hold frequent social meetings and celebrate holidays together. A Jewish member may invite her Muslim chapter members to dine in her sukkah for Sukkot; a Muslim member may host her Jewish chapter members at a break-fast for Ramadan.

“It’s frequently called a sorority, and it truly is,” Olitzky said.

The organization was founded in Central New Jersey. Five of its 10 chapters are based in the state, and a sixth is in New York. Both states have high populations of Jews and Muslims, who often live near each other in middle-class communities. SOSS appears to have grown out of this kind of soil — Americans living in diverse communities and trying to figure out how to help and relate to one another.

One Muslim attendee said that she came “out of my own curiosity to see if I can be an active participant” in interfaith work. Though not yet involved, she said, “You can’t wait for someone else to do [this work]. You have to [do it].” She asked that her name not be shared because she felt uncomfortable publicly voicing her views in a newspaper.

Marisa James, a rabbinical student and senior organizer at T’ruah: The Rabbinic Call for Human Rights, said she was also considering joining.

“There are so many forces conspiring against all religious minorities in America right now,” James said. “It’s an atmosphere that makes us all feel unsafe. We need to see what we can do to restore compassion and sanity for how we talk to one another.”

Olitzky, a former pharmaceutical marketing consultant, described three incidents that pushed her to pursue interfaith work full-time. The first occurred when her son read aloud in his school a book that spoke about his Jewish heritage. Her son returned home frightened, she said, because he was threatened by a Muslim classmate, who said he would blow up his family.

The second incident occurred when she was visiting her other son in Israel years later. Mother and son saw an Arab boy being attacked by five Israeli soldiers, Olitzky related. Her son leaped to the boy’s defense. Olitzky was shocked that she did not.

But she described a trip she took to Poland as “linchpin” in motivating her to activism. “When I saw the hate [toward religious minorities], the only way I could describe it is that I had a calling,” she told the Forward. “I saw I couldn’t rewrite the past, but I could rewrite the future.”

She founded SOSS with her friend Aftab, with a mission to eradicate Islamophobia and anti-Semitism.

Olitzky said she believes that a genocide of Jews could take place again.

Following a speech by Johanna Gerechter Neumann, a Holocaust survivor who recounted how Albanian Muslims had saved her family, Olitzky told the audience, “I do believe there could be another Holocaust. And if there were, I know Atiya and her kids would be at my door.”