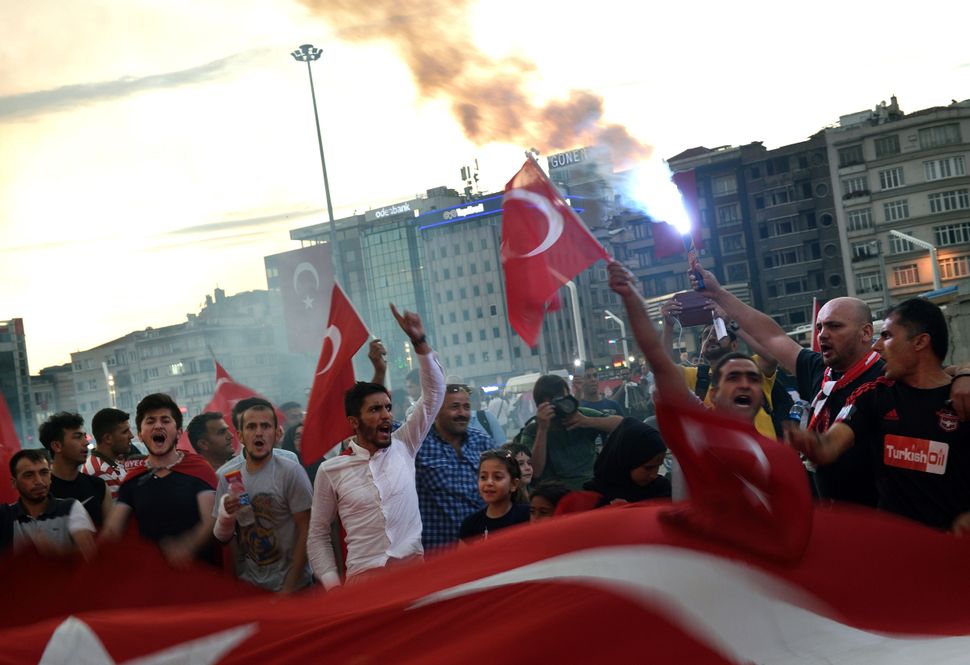 People shout, gestures and hold Turkish national flags as they gather in Taksim square in Istanbul, on July 18, 2016 following the military failed coup attempt of July 15. Image by Getty Images

A prominent Turkish Jewish leader says there hasn’t been any signs of a backlash aimed at the community following the populist uprising that helped defeat the bloody attempted coup aimed at overthrowing President Tayyip Erdogan — but others still fear the worst.

Cefi Kamhi, a Jewish businessman who represents the country in the European Jewish Parliament, said no specific religious or minority group was affected more than the general population by Friday’s coup, which killed more than 300 people and which he called “the bloodiest” in recent history.

“It is not specifically affecting Jews or other minorities, in fact every segment of society has joined together against the coup,” he said of the weekend of chaos that ended with Erdogan restoring his firm grip on power. 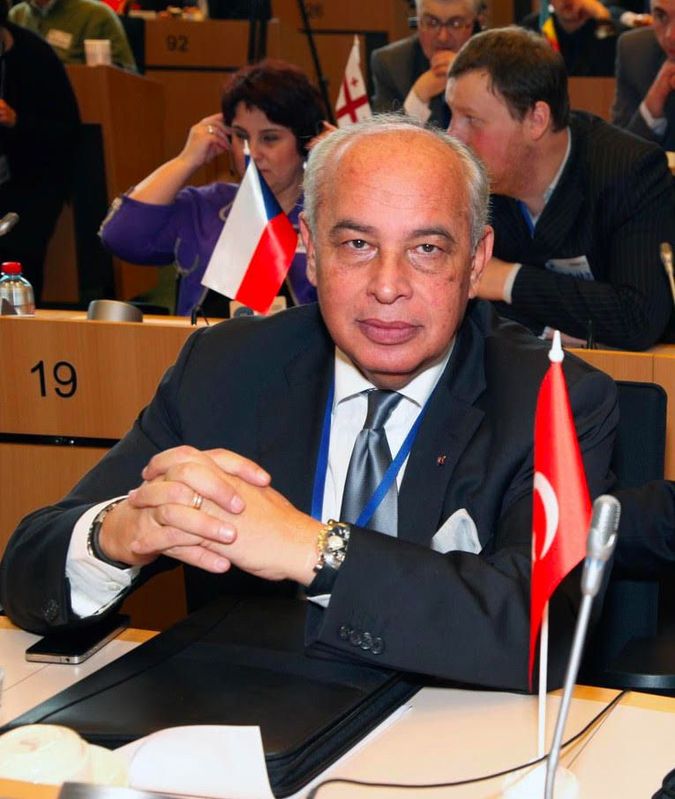 Kamhi, who has been the target of anti-Semitism and multiple assassination attempts due to his public persona, told the Forward from his Istanbul office that the situation for Jews was the same now as it was before the coup.

However, another Jewish Istanbul resident was frightened by new expressions of anti-Semitism and the blaming of minorities for the coup on social media.

“People are celebrating [the] prevention of the coup by chanting Allahu Akbar,” the man, who asked to remain anonymous due to safety concerns, wrote to the Forward. “We hear anti-Semitic slurs and tweets from all around.”

“They turned the prevention of the coup into a religious thing,” he said. “And all minorities are being blamed for it.”

The man feared the coup could be a blow to secularism in Turkey, whose government has taken an Islamist since Erdogan came to power in 2003.

The “army is the protector of the secularism in Turkey, and now since they [people who opposed the coup] can demonize the military it is as they had a victory against secularism,” he said.

Anti-Semitism is “the normal state of affairs” in Turkey, said Avram Levi, who grew up in the coastal city Izmir but moved to the United States 11 years ago. However, he had not heard of any anti-Jewish sentiments or incidents in relation to the attempted coup from his family and friends still living in Turkey.

“The current Jewish sentiments about the coup are more or less in line with the minority of the Turkish population that is more Western — they are very worried about where country is going in general,” said Levi, who has many relatives and friends still living in Turkey. “They are seeing that the current government is becoming increasingly authoritarian.”

Meanwhile, life in Turkey goes on in a relative state of normalcy, said the man who asked to remain anonymous. There are cars and people on the streets and the synagogues remain open.

But his response to a question of whether Jewish institutions had put increased security measures in place was telling.

“If we want to increase the level of security by one bit,” he wrote, “we better close them down.”