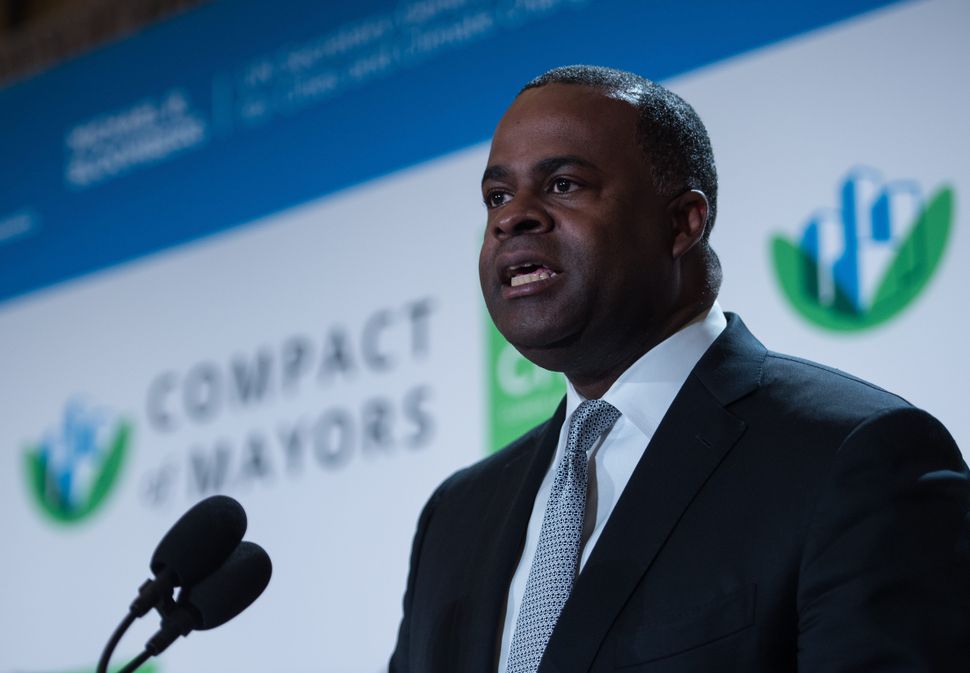 Atlanta Mayor Kasim Reed pushed back on demands from local Black Lives Matter supporters for the city to boycott Israel by standing behind a police training program between his city and Israel.

“I happen to believe that (Israel) has some of the best counterterrorism techniques in the world,” Reed said at a July 18 press conference. “It benefits our police department from that longstanding relationship.”

Black Lives Matter-aligned activists, known as ALTisReady, gave the mayor a list of demands on Monday, first among them that the Atlanta police shutter a training program in what the activists called “Apartheid Israel.”

ALTisReady calls itself a “collective of student activists, community organizers and leaders working to amplify Black and other marginalized voices in Atlanta.” They made 25 demands to Reed, all relating to reforming the city’s police department.

“What I heard most often is that folks want a different relationship with their police department,” Reed said after the meeting. “One of the comments that I made – I don’t want to make another city’s problem Atlanta’s problem.”

“While this was a good meeting,” Reed said, “it doesn’t mean we are going to agree on everything.”

Atlanta, like many American cities, has seen a number of gatherings held to protest the killing of of black Americans by police. Reed has struggled to strike the appropriate tone, balancing understanding protestors’ grievances and keeping peace in the city. A week earlier, hundreds of protesters gathered outside the Georgia governor’s mansion. Reed considered implementing a curfew for protests.

Since the movement gained steam last year, Black Lives Matter protestors have often sought to draw parallels between police brutality and Israel’s military occupation of Palestinian lands. In August 2015, more than 1,000 black activists, including Cornel West, Angela Davis and Black Lives Matter-cofounder Patrisse Cullors, proclaimed “solidarity with the Palestinian struggle and commitment to the liberation of Palestine’s land and people.”

“Will we as a people rise up like the people of Gaza?” one Black Lives Matter protestor told the Daily Beast in 2014. “Will our community be bombed like last night with tear gas? That was a terrorist attack.”

And recently New York University Students for Justice in Palestine chapter sparked fury online after linking Israel to this month’s killings of two black men in Louisiana and Minnesota.

Staunchly pro-Israel Zionist groups, including the Zionist Organization of America and StandWithUs, have criticized such solidarity efforts between black and Palestinian activists. Chloe Valdary, a prominent Christian Zionist who has worked with AIPAC, slammed SJP in a widely-viewed public post.

“Don’t act like you have solidarity with my people,” Valdery said.