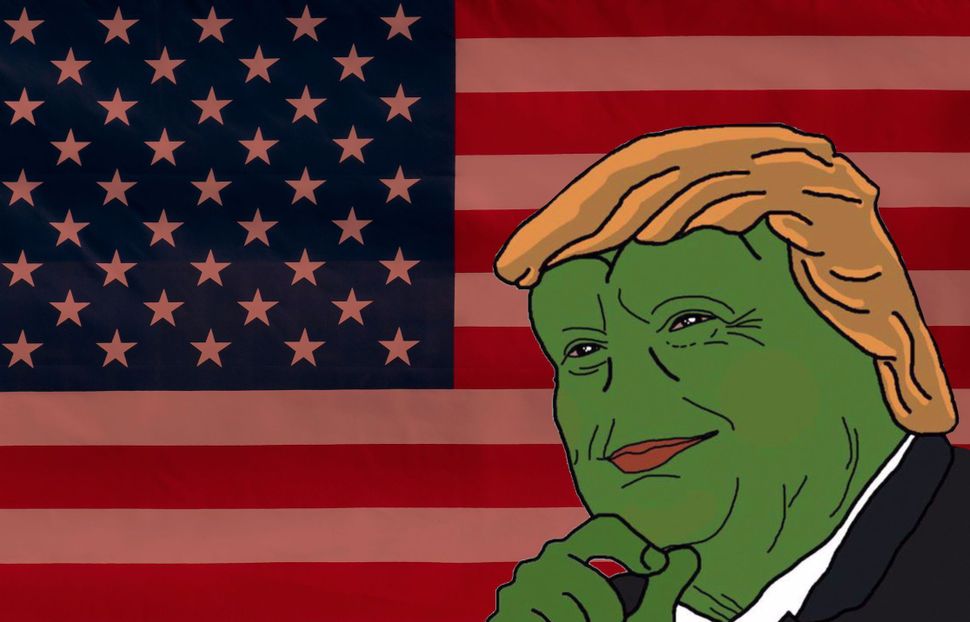 This week the Anti-Defamation League officially listed Pepe the frog to its list of “hate symbols” — just weeks after Donald Trump’s son posted a photoshopped image of his father standing beside the now-officially Jew-hating amphibian.

Trump’s links to anti-Semitic groups will surprise no one who has been following the rise of the Republican presidential candidate — we’ve reported on it frequently. And despite the campaign’s assertion that such support is not welcome, the enthusiastic support of Trump from Neo-Nazis and white nationalists continues unabated.

Here are five more reasons we know that Trump is the darling of the fringe right, drawn from a September 29 LA Times article:

1. David Duke, the onetime Ku Klux Klan grand wizard, is an outspoken Trump fan. Trump has publicly disavowed Duke — but that hasn’t stopped Duke from stumping for Trump and also re-launching his own political career. “The fact that Donald Trump’s doing so well, it proves that I’m winning. I am winning,” Duke said. “Trump happened because of us,” he added, speaking about white nationalists, “not the other way around.”

2. White supremacist websites report a sharp rise in traffic and visitors for Trump stories. To be sure, Trump stories draw traffic everywhere, but editors at sites like Stormfront and the Daily Stormer dedicate a huge amount of coverage to the New York businessman — and are reportedly expanding their sites to account for the increased traffic.

3. White nationalists are raising money and campaigning for Trump. One white nationalist leader in California gave $12,000 to launch a pro-Trump super PAC that made robocalls in seven primary states — with more calls planned in the run up to the election.

5. White nationalists are more politically active than they have been in decades. Not since Southern segregationist George Wallace presidential bids in 1968 and 1972 have white nationalists been this active, the LA Times writes. Andrew Anglin, an editor of the Daily Stormer website said he had “zero interest” in the 2012 general election but is fully for Trump: “Virtually every “alt-right” Nazi I know is volunteering for the Trump campaign.”