The High Price Of Protecting Jewish Cemeteries From Vandals 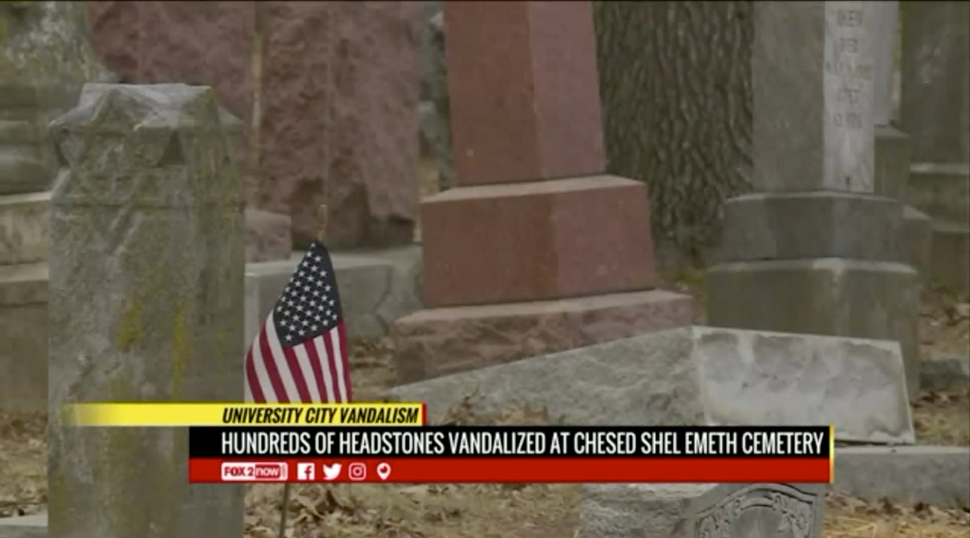 Police investigators in St. Louis and Philadelphia have yet to report on any progress in their efforts to find those behind the vandalism attacks targeting Jewish cemeteries in both cities. Meanwhile, in Jewish communities across the country, cemetery executives are trying to figure out how to prevent the next attack.

“There’s always been a presumption that cemeteries are sacred grounds and that no one will try to harm them,” said Dan Brodsky, chairman of the Jewish Cemetery Association of North America. Brodsky is also the executive director of New Mount Sinai cemetery in St. Louis, not far from the Chesed Shel Emeth Cemetery, which was vandalized February 20. “If this is a beginning of a new trend, we will need to rethink how we protect our cemeteries,” Brodsky said.

Anti-Semitic attacks on American cemeteries were, until recently, quite rare, which gave rise to the belief that vandals considered burial grounds to be off limits. Jewish cemeteries have seen only a handful of incidents over the past decade; some were anti-Semitic, while others were simple theft. Hence the relatively relaxed security. Rarely were family members contacted regarding payment of fees or restoration of ruined headstones.

In St. Louis and Philadelphia many people with relatives buried in the cemetery learned of the vandalism from media reports. The St. Louis cemetery was flooded with people who had come to see to if their relative’s headstones had been damaged. Stanley Estrin, a St. Louis resident, arrived at the cemetery the morning after the attack. “I came here to look for the graves of my family members,” he told an interviewer from Israeli TV’s Channel 10. “I wanted to make sure that they were not damaged.”

So far, the community has not had to bear the financial burden of repairing the broken headstones and cleaning up the cemetery. In Missouri there was an outpouring of donations, while communal volunteers repaired all the damage within days, and at no cost to the families. In Philadelphia, the Building Trades union announced it would restore the headstones, and the electrical workers union volunteered to install security cameras at Mount Carmel Cemetery.

But donating and volunteering might not be a sustainable solution if vandalism continues.

Damage to headstones is covered, in most cases, by the family’s homeowners insurance; the cemetery also insures it, usually in case of natural disaster. “We will take care of the costs from our own money if something happens,” said Stan Kaplan, executive director of the Jewish Cemetery Association of Massachusetts. The association, which overseas 118 cemeteries, had experienced one anti-Semitic incident this past month: a swastika and the letters KKK painted on the fence of a Jewish cemetery.

Securing Jewish cemeteries against future attacks remains a formidable task. Kaplan described them as “soft targets.” Fences rarely enclose the entire perimeter, while a locked gate at night does little to deter vandals, who can easily scale the fence. Few cemeteries employ security guards, and fewer still have security cameras.

Changing this reality could prove costly. Installing cameras and motion-activated lights, hiring security guards and fortifying the fences around sprawling cemeteries, some of which are more than 100 acres, could easily drain the budget of the cemeteries. Most are not-for-profit institutions that rely on relatives and on the local Jewish community for funding.

The preferred course of action for now is working with law enforcement to increase patrols around the cemeteries. Brodsky and Kaplan found their local police departments attentive and willing to ramp up vigilance around cemeteries following recent events. But they are also considering taking costly steps on their own, if needed.

“If it’s a trend, we will have to respond, but if it happens once in a decade, that’s a lot of money,” Brodsky said.

“Our board will consider increasing security,” Kaplan said. “It all depends how bad things become. We can’t allow it to go unnoticed.”

The High Price Of Protecting Jewish Cemeteries From Vandals