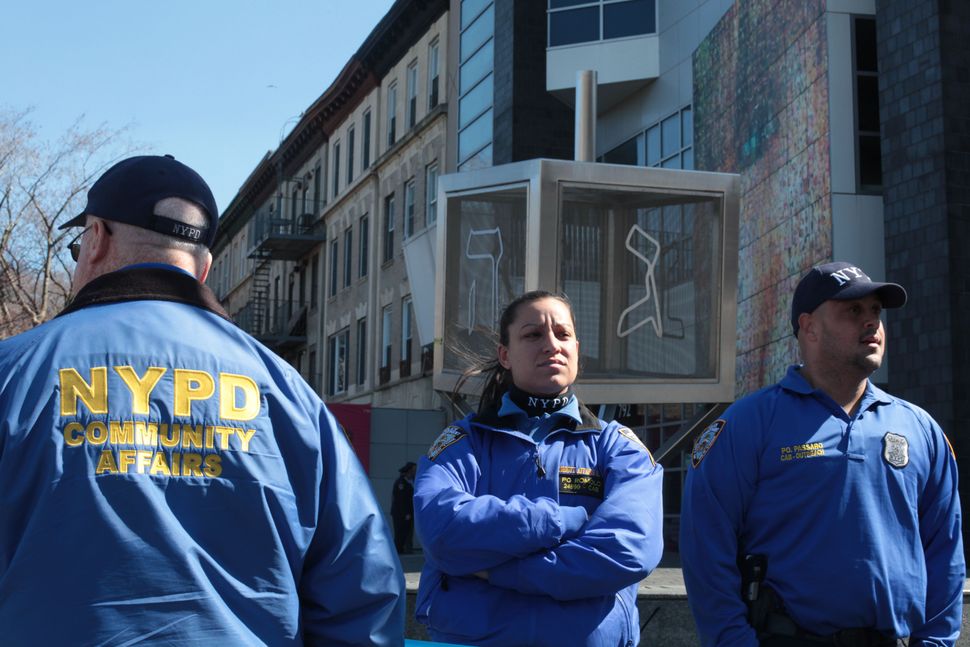 Dozens of police officers and state troopers stood near a giant dreidel in Brooklyn after the Jewish Children’s Museum received an anonymous e-mail warning of three pipe bombs inside the building.

Among the onlookers on Eastern Parkway was a 13-year-old Orthodox boy wearing a black felt hat and riding a scooter. He said he’d had his bar mitzvah in the building.

“In this city, in New York, I feel safe, but now I’m starting to doubt myself,” he said.

The threat to the museum was the latest of more than 130 bomb threats made to Jewish community centers, schools and institutions since the beginning of 2017. Experts see them as part of a broader wave of hate crime, including anti-Muslim crime. Some analysts of hate crime, such as the Anti-Defamation League, see a connection between the election of President Trump, who attracted white nationalists and other bigots among his supporters, and the increase of such attacks.

Like the rest, Thursday’s was a false alarm. But the disruptive events are raising questions among parents and educators: How are the kids feeling? What to tell them? After all, children see the world differently from adults, and from each other at different ages.

“We don’t want our kids to see the world as a scary place they should be afraid of,” he said.

Devorah Halberstam founded the museum in memory of her son Ari, who was shot and killed by a Lebanese assailant in 1994 on the Brooklyn Bridge. She said her lasting impression from the morning’s events was the swift response from New York’s government and law enforcement. New York’s governor, Andrew Cuomo, toured the building, and Mayor Bill de Blasio paid a quick visit shortly after. 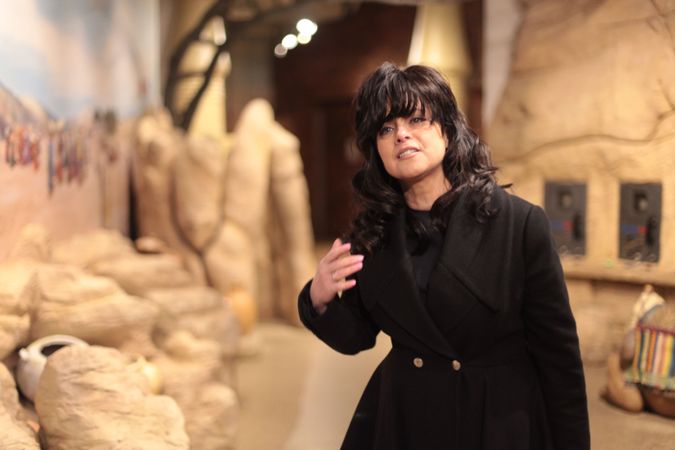 Devorah Halberstam, who founded the Jewish Children’s Museum in memory of her son, Ari, murdered in 1994, said she took heart in the swift response of law enforcement to a bomb threat in March 2017. Image by Daniella Cheslow

“When you look at law enforcement and how amazing they are, you say in this country, that’s what America stands for,” she said. The heavy police presence would show children how safe they are, she added.

Esther Berkowitz was waiting behind police tape across the street from the museum for her 6-year-old daughter, who was finishing school nearby. “She’s probably oblivious,” Berkowitz said. She noted that if her daughter asks about what she saw, she’ll tell her the police are taking extra safety measures.

Berkowitz stopped to talk to a boy, 8, who left school early because of a Jewish fast day ahead of Purim. He was wearing a homemade Purim costume — a vending machine selling the Israeli snack brand Bissli and a miniature Torah scroll. Looking at the police around him, he said calmly, “I think it’s a bomb.” Then he thought for a moment, and asked, “What happens if a bomb explodes right here?”

Then he dropped the issue and talked about his costume. He still planned to walk to his house nearby.

Levi said that, as the threats keep coming and show no sign of stopping, he is circulating a bomb threat tip sheet.

The Jewish news site TCJewfolk.com in Minneapolis-St. Paul, where Jewish institutions were also recently threatened, published the sheet. The bottom line: Listen to your children’s concerns, but remember that kids are resilient, and send them back to school.

Levi said several schools targeted by bomb threats have used the incidents as opportunities. In late February, students at the Brauser Maimonides Academy in Fort Lauderdale, Florida. were preparing for an evening singing session at the local JCC. A bomb threat caused the JCC to close — so the students prepared an outdoor stage on the school’s front lawn. “Let this be the message,” the head of school, Rabbi Yossi Kastan, wrote in a Facebook post. “No matter what test is sent our way, we will continue to rejoice in our Judaism.”

Authorities have been trying to crack down on the calls to Jewish organizations. Last week federal agents arrested Juan Thompson, 31, of St. Louis, and charged him with making threats to at least eight Jewish institutions.

On Tuesday all 100 senators signed a letter calling on the Department of Homeland Security Secretary John Kelly, Attorney General Jeff Sessions and FBI Director James Comey to take action in response to the threats and recent vandalism of Jewish cemeteries.

“We are concerned that the number of incidents is accelerating and failure to address and deter these threats will place innocent people at risk,” the senators wrote.

One father at a recently targeted school told the Forward his 6-year-old now journals about bomb threats and asks him questions like who is making the calls and why don’t they like us.

The father, who asked to remain anonymous to preserve the security of the school, said he tells his child to focus on the kindness of a nearby church that let students stand in its parking lot during the evacuation. The threat came in during morning prayers, and students brought the Torah outside with them, laid it on the roof of a car and read from it.

The lesson, he said, is that “one person may want to make it really hard for you to be Jewish, but there are a lot of other people out there who aren’t like that, like the people who sheltered you at the church.”

Paul Bernstein, CEO of the Prizmah umbrella organization for some 300 Jewish day schools, said several day schools have received bomb threats but none has seen a decline in registration.

In Brooklyn, after police took down their blue tape, the museum remained closed to the public, although reporters walked through the exhibits. Etti Koren, an Israeli woman visiting New York, stood in the foyer and took stock. “I don’t think it’s too serious,” she said. She added that her six children were not scared — they were disappointed that they could not go inside.

A yeshiva student, 19, passing by the museum said his teachers have not discussed the recent bomb threats with the class. The student, who asked to remain anonymous, added that he sees no connection between President Trump and the rise in bomb threats.

“I just think it has to do with the general wave of anti-Semitic acts, like the attack on Jews in France in 2015,” he said. “I don’t think it’s right to put this on Trump, to say he enabled this.”