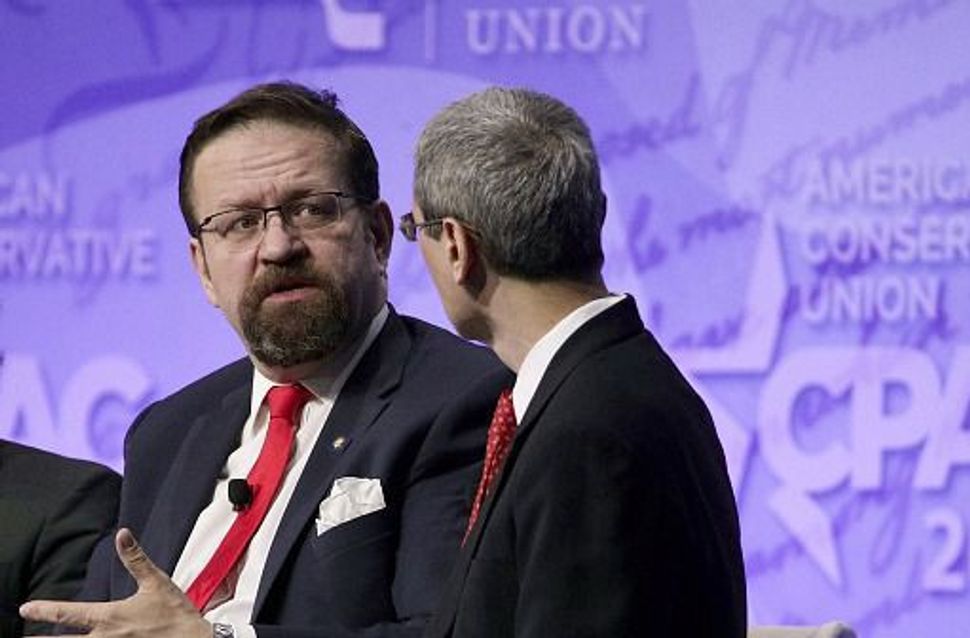 Facing an adoring crowd of pro-Israeli Jews, President Trump’s controversial aide Sebastian Gorka sought to frame the discussion regarding his affiliation with pro-Nazi organizations as part of an organized campaign by critics of Israel.

“Because we are pro-Israel we have to be attacked,” Gorka said at the annual Jerusalem Post conference held in New York. “Whether it’s the president, Steve Bannon, Steve Miller or me.” Gorka was referring to Trump’s top advisers Bannon and Miller, both of whom are representing the far right-wing school of thought in the Oval Office.

According to Gorka, claims directed at the Trump administration regarding its approach to Jews, Islamophobic undertones or relations with the far right all have to do with the president and his advisers’ views on Israel.

“Who are the leaders of the slanders against the administration?” Gorka asked. “People who are either connected to BDS or pro JCPOA Iran deal.” BDS is the movement calling to boycott Israel and divest from it, and the JCPOA is the nuclear deal signed with Iran during the Obama administration. 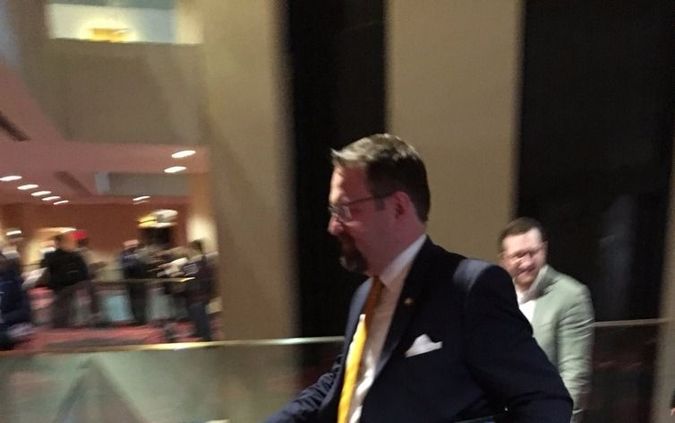 “I have spent my life fighting against totalitarian ideologies and so did my father,” Gorka said, praising his father’s work and the award he received for his activism. “The bottom line is that nobody, not at the Forward, not at Politico, has found one sentence I said that is anti-Semitic or anti-Israel.” Gorky was referring to the Forward’s reporting about his ties with Hungarian groups.

The Forward’s editor-in-chief, Jane Eisner, noted that the Forward never accused Gorka of being anti-Semitic and that she merely asked him to explain his affiliations and support for far right-wing groups.

Sitting onstage in an interview setting, Gorka was not pressed by The Jerusalem Post’s editor, Jacob Katz, to provide any substantive explanation of his involvement with the Vitezi Rend order in Hungary. Although he has denied being a formal member of the group, Gorka has repeatedly expressed support for the far right-wing organization that the U.S. government says was under the control of the Nazis during World War II.

Katz allowed him to change the subject to his preferred topic of the threat of radical Islam.

“Jihadis are linked to fascists because they are totalitarians,” Gorka added.

Gorka’s appearance at the conference was aimed at sending a double message: first, reaching out to the Jewish community and winning over its support, and second, disproving claims that he has lost grace with the president and is on his way out of the White House.

“There’s fake news and there’s very fake news,” Gorka said about reports stating that he was asked to leave. “I will be there for as long as the president has use for me.” Press reports detailing inner fighting within the Trump White House, Gorka said, come from people “who don’t like our stance that we wish to be leaders of the world. That’s a sad reality.”

The audience at The Jerusalem Post conference responded to Gorka’s address with lengthy applause, especially when he spoke about the threat of Islamic jihadism. A victory in the war against terror, he said, will be achieved when “the black flag of [the Islamic State group] is reviled around the world like the swastika.” He criticized the Obama administration for refusing to use the phrase “radical Islam” and likened it to a commander telling soldiers on D-Day not to refer to the Germans as Nazis.