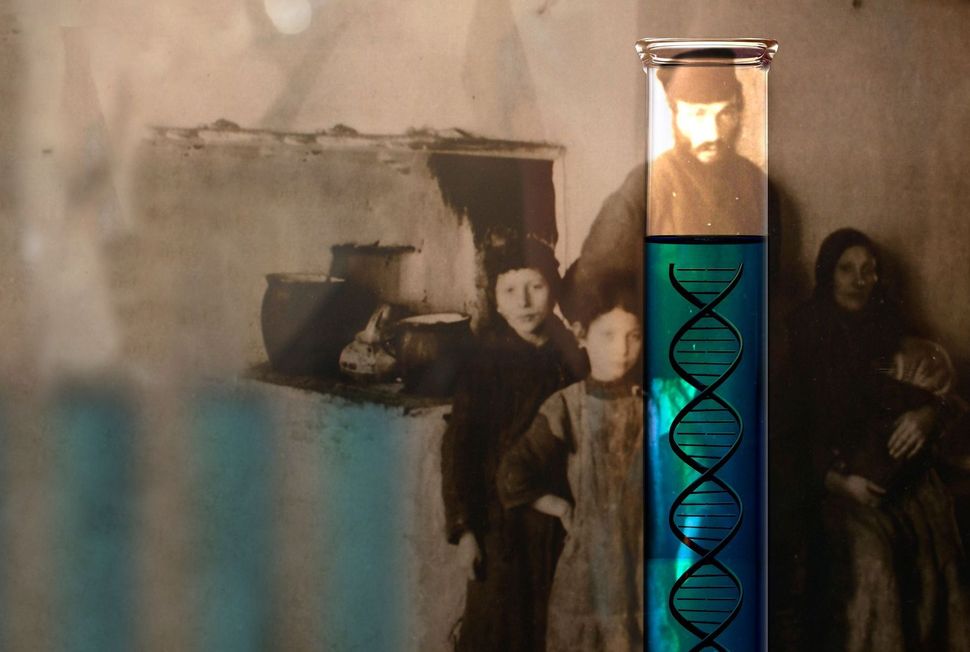 Phil Mazo, a comedian based in Jersey City, NJ, was reading through the to-do list on his phone when he decided it might be time to check off one item that had been on the list for some time: Buy a take-home genome testing kit from the company 23andMe. After finding a deal on a kit on Ebay — a man had bought tests for his whole family, but was left with an extra kit after his brother got divorced — Mazo hit “purchase.”

Mazo’s parents emigrated from Soviet Russia. They were completely secular, and there’s a lot he doesn’t know about his family tree. Maybe the test could give him the proof of his own Jewishness that religious observance never could.

“I wonder if part of that is also a search for identity,” he said.

Learning your genetic makeup has never been easier than it is in 2017. For less than the cost of a doctor’s visit, some people are trying to use the service to find out if — or to what extent — they’re Jewish, a phenomenon that worries historians and scientists. Buyers of mail-order gene testing kits do get solid information from them. They learn where their ancestors were living nine generations ago. Some have even found living, but long-lost, family members. The danger, experts say, is that in relying on these kits to learn more about their genes, users are perpetuating the notion that Jews are a race — a concept they say has no scientific basis.

“In a culture like America, where most Jews are largely assimilated and a lot of Jews are not religious in any way, the idea that there is some invisible essence that ties us to our ancestors, even without us behaving Jewishly, is a very appealing idea,” says Steven Weitzman, a professor of Jewish history and author of “The Origin of the Jews: The Quest for Roots in a Rootless Age.” “It’s a stable source of identity that is appealing at a time when Jews feel like they’re losing their identity.”

Eighty years after the Holocaust, in which about 6 million Jews were killed in the name of purifying the Aryan “race,” the business of direct-to-consumer genetic testing is booming and it’s never been cooler to spit in a sterile plastic tube. Ten years ago 23andMe started holding “spit parties” at New York Fashion Week to get publicity. Now the company has a valuation of over $1 billion. People who use genome testing services routinely post videos on YouTube of themselves learning their ancestry in real time.

OK I got my 23andme thing back and… ASHKENAZI JEWISH? This rules. pic.twitter.com/FYBWHfw3Aj

Though genome tests may not sway one’s sense of Jewish identity, they have become popular at a moment when Jews are talking more and more about what Judaism is: Is it a race? Are Jews white? The movie Wonder Woman starring Israeli Gal Gadot, a fair-skinned Jew of Eastern European descent, triggered an online debate about whether Israelis could be considered people of color.

Mine came back and basically told me I am extremely white. Minus a bit of Ashkenazi Jewish heritage which is kinda dope because Gal Gadot.

The idea of race has historically slotted humans into a handful of categories: Asian, African, white, etc. But research has shown that there can be as much genetic difference within these races as between them, and experts say the notion that one’s skin tone and facial features alone can predict social behavior is plain wrong.

“It’s really important for all of us to resist the attempt to revive this discredited notion that race is a biological category rather than a political and social category,” said Marcy Darnovsky, director of the Center for Genetics and Society, a not-for-profit scientific ethics group.

Indeed, 23andMe and Ancestry.com doesn’t even try to attempt to isolate “Jewish” genes — just Ashkenazic genes. 23andMe lists “Ashkenazi Jewish” as a reference population within the larger European population. Ancestry.com calls Jewish genes “European Jewish.” Sephardic Jews are not considered a distinct population by either company, or by researchers — their genetic make-up is not sufficiently different from surrounding North African, Iberian and Greek populations. Ashkenazic Jews often find themselves in the peculiar situation of being 90% Ashkenazi Jewish and 99% European. Sephardic Jews may be told they are mostly Middle Eastern and North African and less than 10% Ashkenazic.

Stuart Schuffman, a travel writer and blogger who writes under the name Broke Ass Stuart, said he bought a kit from 23andMe because even though his family insists they’re exclusively Jewish, he thought there was a possibility that he had some non-Jewish ancestry.

“I was curious, because you never know,” said Schuffman. “Family stories are just stories.”

Schuffman, who learned that he is 99.8% Ashkenazi Jewish, said the test hasn’t made much of a difference on his sense of Jewish identity.

“Judaism’s really informed who I am, and my values and my worldview,” Schuffman said. “[23andMe] hasn’t made me more or less Jewy at all. I’m just Jewy.”

However, Schuffman added, he’s Jewy and white, while other Jews — Sephardic Jews, Ethiopian Jews — can’t claim that distinction. He’s an ethnic minority, but a white one nonetheless.

“I get all the benefits of white privilege,” he acknowledged.

Geneticists say “white” is an empty concept, connoting nothing about intelligence or personality.

Jews do, however, have “shared genetic origins,” wrote Dr. Harry Ostrer, a population geneticist and author of the book “Legacy: A Genetic History of the Jewish People.”

That means that while Jews originated in the Middle East, they began forming long-term communities in various places — Iraq, North Africa, the northern Mediterranean, central Asia and, eventually, Eastern Europe — after their expulsion from the ancient Israelite kingdoms in modern-day Israel. Even as these communities formed their own unique genetic signatures and intermarried with non-Jews around them, they retained certain sequences of DNA that are unique to people descended from ancient Israelites.

Thus, if you are nearly 100% percent Ashkenazi according to 23andMe or Ancestry.com — like Stuart Schuffman — you likely have an abundance of these particular genetic sequences. If you are 10% Ashkenazi and have Sephardic heritage, you may still have an abundance of Jewish genetic sequences — they may have just come by way of Morocco, or Iran, and be different from the genes that make Ashkenazi Jews unique.

To make this easier to explain, Dr. Ostrer describes Jewishness — at the genetic level — as a “tapestry.”

The threads of the tapestry, he writes in “Legacy,” can be “represented as shared segments of DNA and no single thread [is] required for composition of the tapestry.” In other words, there is no single “Jewish gene” — more a collection of genetic sequences that scientists have come to identify with a certain community that originated in the Middle East before migrating around the Mediterranean region. (Incidentally, people of Middle Eastern origin sometimes find they have a small amount of “Ashkenazi” ancestry for this reason.) Many modern Jews have this story encoded in their DNA.

“Jews in the 20th century and late 19th century have gone through this experience of genealogical rupture,” said Steven Weitzman, the Jewish historian. “These genetic testing companies give you a very quick way to establish a connection to ancestors in the old world.”

Weitzman said that he thinks the excitement over services like 23andMe will fade as genetics fails to answer the political questions we hoped it would. He likened it to archaeology: many people once assumed that uncovering ancient Israelite society would strengthen the Jewish claim to the land of Israel.

“The more we learn about archaeology, more we debate,” Weitzman said.

“My feeling is that genetics is likely to move in the same direction,” he added. “It offers insights, but at the end of the day the data has to be interpreted, and it can be interpreted in different ways — ways that can be construed as politically motivated.”

But for Phil Mazo, the comedian, politics are the farthest thing from his mind as he waits on his 23andMe kit to come in the mail. His cousin, a medical resident, recently took 23andMe’s health test and learned about his genetic predisposition to degenerative diseases like Parkinson’s and Alzheimer’s. Mazo wasn’t sure he he could live with bad news.