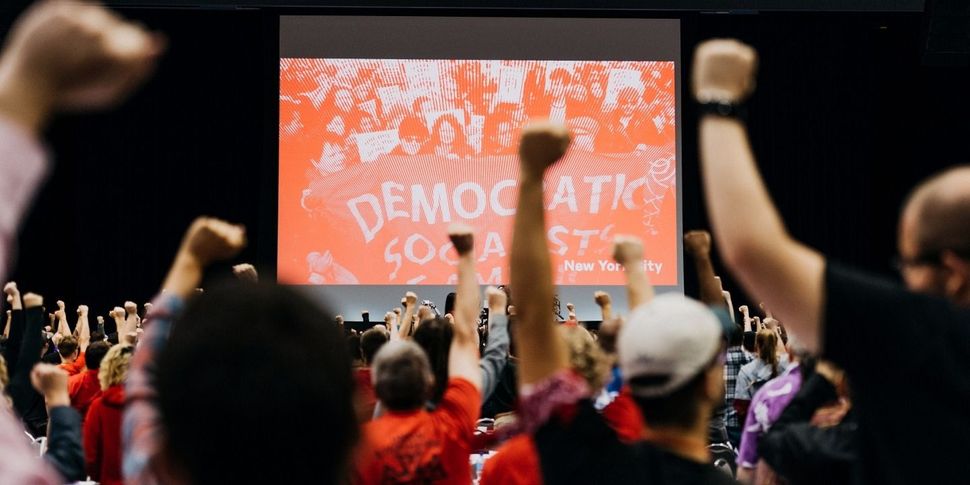 The DSA voted to endorse BDS at this year’s convention in Chicago. Image by The Intercept

The Democratic Socialists of America endorsed the boycott, divestment and sanctions movement at its most recent convention, with emphatic support from the 700 delegates in attendance, including the Jewish ones.

The resolution passed with 90% in favor of the motion, and according to one attendee, “easily 90% to 95%” of the Jewish delegates present voted “yes” as well. The DSA does not keep numbers on the religious affiliations of their members.

“As a Democratic Socialist, I believe that housing, education, electricity and water are the rights of all,” said Amelia Dornbush, a Jewish delegate from the New York DSA chapter. Dornbush, who voted for the resolution, credits the values she learned from Judaism for her vote.

The vote reflects broader trends in activism and on campus, in which some politically active Jews feel they must choose which aspect of their identity — support for their cause or for Israel — is more important. The flap over the Star of David flag at the Dyke March in June, where Jewish activists bearing a rainbow flag with the Star of David were asked to leave the parade, is one recent example.

For Dornbush, the choice wasn’t difficult. Others struggled, especially when they heard chants that evoked the intention, often repeated by enemies of Israel in the region, that the country would be pushed into the sea.

FROM THE RIVER TO THE SEA PALESTINE WILL BE FREE @DemSocialists pic.twitter.com/F7IBFPHTLr

Gabe Kramer, a delegate from the Pittsburgh chapter who once briefly served on the DSA’s National Political Committee, feels torn by the resolution. He’s critical of Israeli policy, but doesn’t see BDS as the means to that end. “We need to be in solidarity with progressive civil society in Israel working against the occupation,” he said.

Ultimately, Kramer says, the BDS resolution leaves a lot of unanswered questions for the DSA. He “remain[s] committed to a two-state solution,” he says, but does the organization now support one state? It’s not yet clear, he said.

To Dornbush, the addition of BDS to the DSA platform comes with a lot of positives. “I believe that the resolution will draw new membership, Jewish and non-Jewish alike, into the organization,” she said. “The day after the resolution passed, I got a message from a Jewish friend who was now interested in joining DSA.”

Though she acknowledges the divisiveness of the issue even among self-described socialists, Dornbush doesn’t see this as particularly noteworthy. The DSA, she says, is a “broad-tent Democratic Socialist organization,” and disagreement can’t be avoided completely.

Kramer, for his part, will remain with the DSA but still has questions over his future with the group; Dornbush is excited by what the resolution will bring. The convention, she says, was an “amazing opportunity to meet and develop connections with many Jewish socialists.”

“I anticipate many Socialist Shabbats on the horizon!” she said.