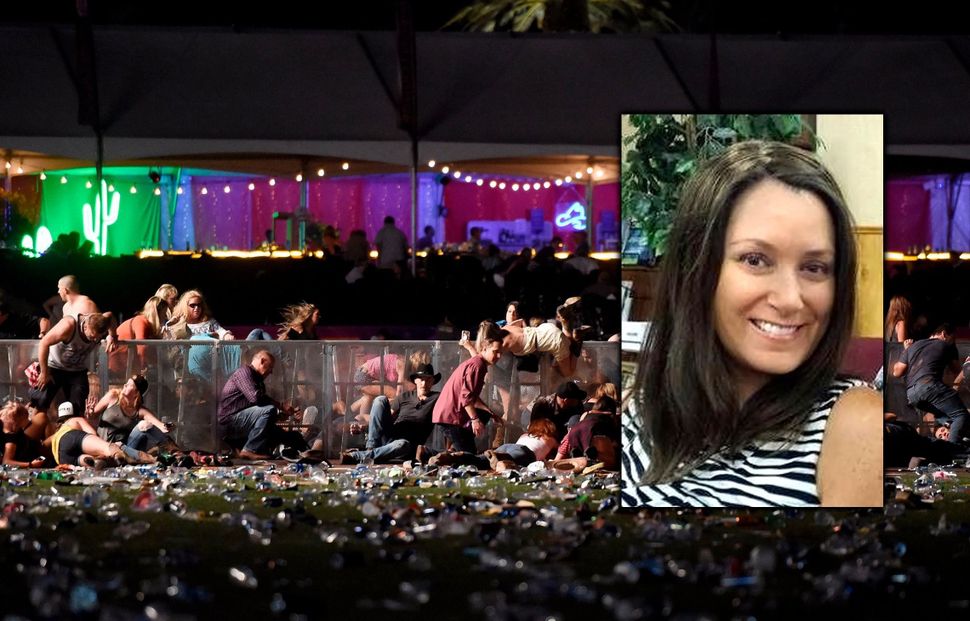 After two nights of country music, Jason Grumet was tuckered out. He and his wife of 14 years, Natalie Grumet, were in town with his mother and some friends and family to take in the three-day Route 91 Harvest festival and enjoy the neon-splashed fun of the Las Vegas Strip.

Even though it was held over Yom Kippur, Natalie Grumet had been looking forward to the festival for months. She and her husband, both of whom are Jewish and live in Dana Point, California, make a point of going to Las Vegas twice a year. This time, Jason Grumet, 38, was fighting a cold; it had forced him to stay in bed instead of going to Yom Kippur services. After attending some of the festival’s final concert Sunday night, he left his wife, 37, and a friend at Sunday night’s final concert; he gave his wife a kiss and went back to their hotel room in the Mandalay Bay Resort to rest.

A little after 10 p.m., he thought he heard fireworks from the concert through his window. Not long after, he got a frantic call from his wife’s friend: His wife had been shot, she told him. They had both been shot; everyone was being shot at.

Eventually the friend told him that an ambulance had taken her to Sunrise Hospital, where she was one of 180 shooting victims being treated — across 30 operating rooms at once.

Inside, he found his wife: She’d been shot in the face, the bullet entering her cheek and exiting near her jaw. It missed her brain by inches. Her mandible was shattered. The skin had been taken off her jaw.

Since news of her injury spread to family and friends, they flooded her room with love: Natalie Grumet’s parents, aunts, uncles and cousins have come to visit her and Jason. Two friends flew in from Los Angeles for several hours “just to touch her,” said her mother-in-law, Pearl Grumet.

With her still unconscious, the family has been reciting prayers and saying the misheberach, the Hebrew prayer for healing. Jason Grumet has wrapped tefillin with rabbis who are visiting patients in the hospital.

“We’re a strong family, we’re a tight family,” he said. “And we look to our faith for help and for comfort.”

It’s not the first time Natalie Grumet’s family has been in spiritual need. Grumet was diagnosed with breast cancer when she was 26 — less than four years into her marriage. Pearl Grumet says that for her son — a man whom many describe as having a tough exterior with a soft, “spiritual” personality — the diagnosis was almost more than he could bear. 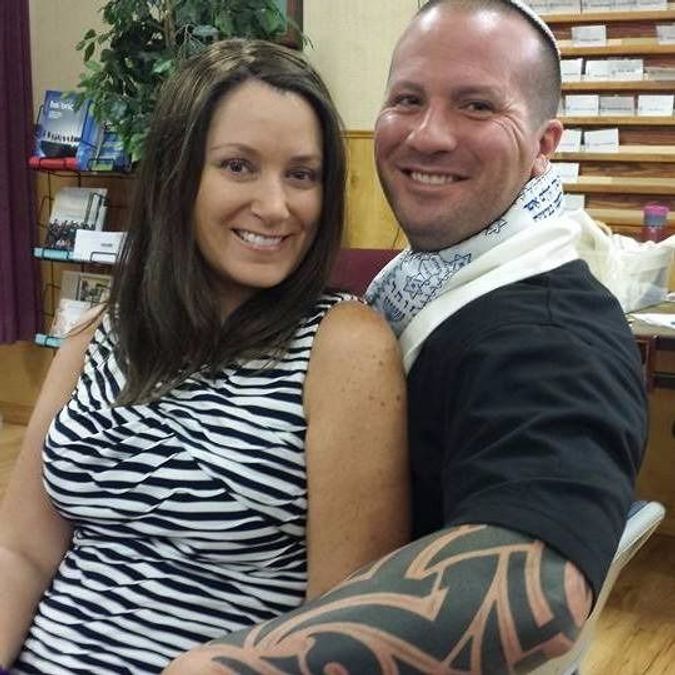 “Devastating is putting it mildly,” Pearl Grumet said. “We were all devastated, but he was beyond, and crushed, that he couldn’t protect her from that.”

“Jason is a very strong person,” Grumet added. “He has his moments, of course, as we all do. At the same time he’s very sensitive, especially when it comes to his wife. She’s his everything.”

Natalie and Jason Grumet met on JDate, where she had not put up any photos, because, as Pearl Grumet said, she wanted “to find somebody who loved her for her, no matter what she looked like.”

Grumet says her daughter-in-law got what she wanted: It was love at first sight.

“When he came home,” Grumet said with a laugh, “he said: ‘Mom, she’s so beautiful, I can’t believe she’s Jewish!’

“I think with them it was instant love. They’re just one of the most passionate, loving couples that I’ve ever known. Jason literally does nothing without Natalie, and Natalie’s the same way.

“They still act like they’re 22 and 23 with each other. She’ll jump on his back, and he’ll carry her around, like they’re crazy kids. Just because they looked at each other they’ll give each other a kiss.”

The pair bonded over their love of the outdoors, especially camping in the desert and spending time at the beach. They split their time between a home in the Los Angeles area and an apartment right across from the beach, in Orange County, and they visit the beach almost every day now, says Erinn Jean, Jason Grumet’s cousin. He is an avid surfer, and his wife plays with their dog, Guinness. 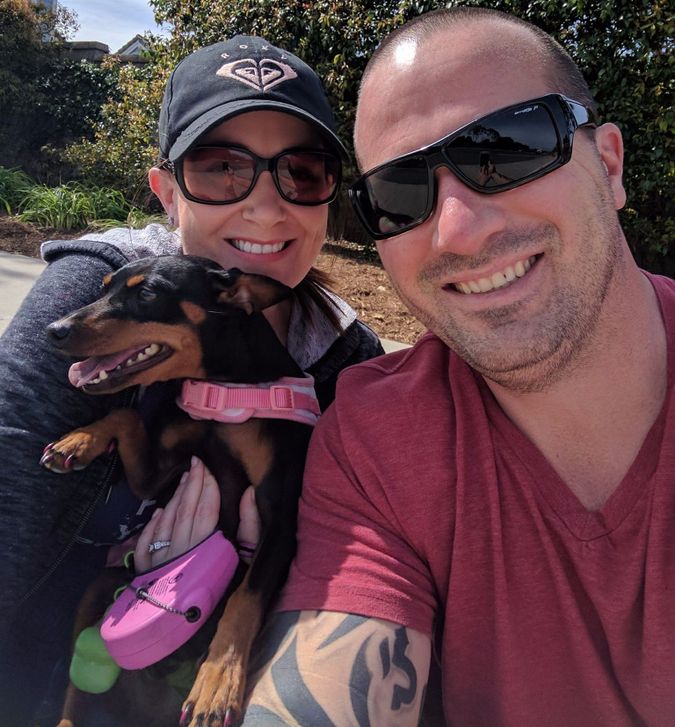 Though they do not have children of their own, they routinely baby-sit for their cousins’ children, taking them to the beach, on hikes and to waterparks.

After Natalie went into remission she began a Facebook group called “Beauty Survivor,” where she posts makeup tutorials for women who suffer the long-term effects of intensive chemotherapy, including hair loss, complications from surgeries and hormone changes.

“I’ve struggled for years to find balance in those losses and how they affected me physically,” she wrote in the group. “This group is ultimately my journey and way to help everyone find their beauty survivor.”

In the wake of his wife’s illness, Jason Grumet turned back to his religious roots. Though raised in a fairly observant household — he attended day school until sixth grade — he had not found a Jewish community that he felt comfortable in during his 20s. About five years ago he began attending services at his local Chabad synagogue, where he now regularly reads Torah and attends Shabbat services.

Natalie Grumet’s cancer “was a big wake-up call for him,” said Rabbi Mendy Paltiel, co-director of the Chabad Jewish Center of Laguna Niguel.

“Jason is a real neshama, a very spiritual individual,” Paltiel said, using the Hebrew word for “soul. He’s solidly built, and he’s rugged, but he’s soft and sensitive on the inside. He’s been very involved in growing in his Yiddishkeit” — his Jewishness.

Pearl Grumet says she isn’t sure why her son has become more observant in recent years.

“Maybe he was looking to God for an answer as to why Natalie had gotten her breast cancer,” she said. “It maybe gave him an inner peace.”

Though Natalie Grumet’s vital signs are stable, her face will require multiple reconstructive surgeries. On Monday her sister-in-law set up a GoFundMe page to pay for the cost of airlifting her back to Orange County so that she could receive more individualized attention than the overworked doctors at Sunrise Hospital can provide. In less than 24 hours the family raised over $50,000. They expect to have Grumet flown to the Los Angeles area, to the hospital where she works as an ultrasound technician, on Thursday or Friday.

For now, in a Las Vegas hospital room, Jason Grumet’s inner peace is being tested. Peal Grumet says that her son is trying his best to stay composed. She has been able to find hope in Las Vegas’s reaction to the shooting.

“I would really like to give thanks to the city of Las Vegas,” his mother said. She noted that volunteers have waited for hours to donate blood, and that hotels up and down the Strip are offering rooms for free to the families of victims.

“It’s just amazing that unfortunately when a tragedy strikes, we become a community,” she said. “And when it’s not a tragedy, it’s every man for himself. What the world needs is a little more compassion and a little more love, and less meshugenehs.”