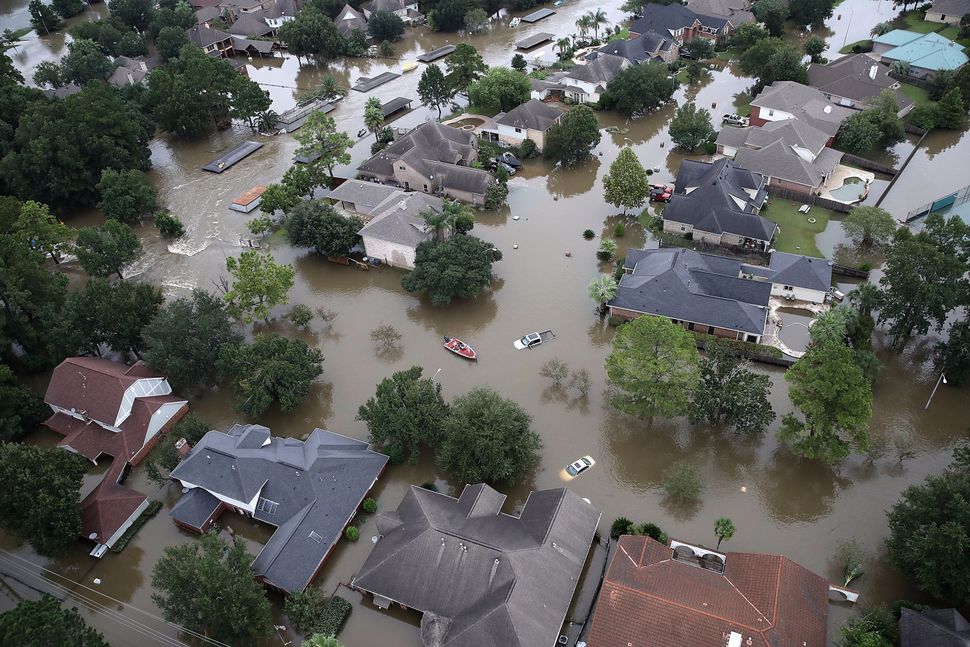 Cleanup after Hurricane Harvey is moving at a slow pace in Texas’ Gulf Coast region and in the Houston area. As of early this month, over 60,000 people were still living in hotels, and on Friday, Texas Attorney General Ken Paxton announced an investigation into companies that “may be over-promising but under-delivering” in removing hurricane debris from neighborhoods in the region.

But some residents and business owners may have another barrier to returning to their normal lives: their views on Israel.

In a widely distributed document, the city of Dickinson — a small suburb of Houston near the Galveston Bay — is requiring residents and business owners to verify that they do not and will not boycott Israel in order to receive hurricane relief funds. Many have attacked the city for seeming to single out residents critical of Israel. Yet inclusion of the anti-BDS clause was mandated by a Texas law signed into law in early May.

“It is absolutely unconscionable for the government to propose a political litmus test on hurricane relief grants,” said Brian Hauss, a staff attorney with the ACLU’s Project on Speech, Privacy, and Technology. “That is not the place to be waging a political campaign.”

The roots of the anti-BDS bill came from a meeting between Texas governor Greg Abott and Israeli Prime Minister Benjamin Netanyahu in 2016. The bill was signed into law on May 2nd of this year, Israel’s Independence Day.

Though the law is statewide, Dickinson, which seems to be the only city including the anti-BDS clause in its hurricane relief grants, has borne the brunt of the backlash.

In an email to the Forward sent Thursday night, Dickinson mayor Julie Masters asked the Forward “not to crucify” the city, since they are simply following state law.

“I encourage you to contact any and all Texas State Legislators and ask them why they passed such a mandate,” Masters wrote. “Dickinson may be the first to include this language in a contract, but every governmental entity in the State is required to do the same.”

Masters did not respond to multiple requests for further comment.

Hauss noted that other cities in the battered Gulf Coast region have also begun to include the anti-BDS clause in government contracts. Galveston now requires potential contractors to certify that they do not support boycotts of Israel, and the Galveston police included the clause in a recent request for bids on new police uniforms.

“It’s important to note that these contracts really have nothing to do with Israel at all,” Hauss said. “They’re providing regular local services. These people’s participation in a boycott of Israel really has no bearing on their jobs.”

The city of Dickinson, Texas is requiring people applying for Hurricane Harvey aid to promise not to boycott Israel. This is unconstitutional.

The ACLU is currently challenging a similar law in Kansas after a math teacher there was asked to pledge not to boycott Israel when she was set to work as a education consultant for the state. According to The Hill, there is similar legislation in over 20 states.

So far there have been no reports that any resident of Dickinson or the Houston area has been denied hurricane relief grants for refusing to rebuke boycotts of Israel. But for those who closely follow the wide-ranging BDS debate, the inclusion of the clause at all is a source of concern.

“The question is appropriateness,” Emran El-Badawi, program director and associate professor of Middle Eastern Studies at the University of Houston. “I question the appropriateness of including the BDS discussion in an area of — I can’t even call it call it politics, it’s more disaster relief and basic social welfare.”

“That entity has basically made up its mind on the BDS discussion, and it’s imposing that on a grantee during their time of real weakness,” El-Badawi added.

El-Badawi said that he routinely goes to Israel for academic conferences, and appreciates that it is a controversial issue. For him, the specific context of the BDS issue is besides the point.

“That clause could have read anything,” he said. “You can’t support PETA, or gun control. You pick any divisive issue — it would be a breach of the transparency we expect of government to kick people like that when they’re down.” 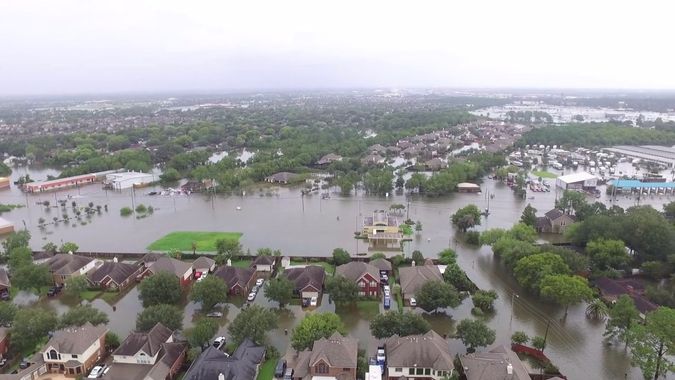 A screenshot from a drone video of Dickinson in the days after Hurricane Harvey. Image by YouTube

The law requiring the anti-BDS clause seems to have been preordained in a visit by Gov. Abbott to Jerusalem in January 2016. During his meeting with Netanyahu, Abbott declared his intention to pass a series of laws that tightened existing state laws preventing businesses from investing in Iran.

When the series of pro-Israel laws were voted on during Texas’ 2017 regular legislative session, the anti-BDS bill was included. The bill was spearheaded by state Rep. Phil King, who represents a deeply conservative district just outside Fort Worth.

“I’ve been here 18 years and I’ve never had legislation that so many people jumped up and said, ‘We want to help,’” King said of the bill in February. It came into effect on September 1st.

In a press release from June, Abbott reported having called Netanyahu to reaffirm that “anti-Israel policies are anti-Texas policies.”

“Texas has enjoyed a long and productive relationship with the Israel, and I am proud to reaffirm our commitment to our most trusted partner in the Middle East with the signing of these laws,” Abbott said in a statement.

Lawmakers from other states that have passed the bill have routinely cited their commitment to Israel in passing the bills, even when groups like the ACLU have claimed that the laws are unconstitutional.

Hauss, of the ACLU, noted that the Supreme Court has held the importance of expression protected under the First Amendment over the state’s right to regulate economic activities.

“This Court has recognized that expression on public issues ‘has always rested on the highest rung of the hierarchy of First Amendment values,’” the court ruled unanimously in NAACP v. Claiborne Hardware Co in 1969.

According to local news reports, Dickinson was one of the hardest hit municipalities during Hurricane Harvey, which caused severe flooding in Houston and along the Gulf Coast. According to Dickinson police, 7,376 homes were damaged, with roughly half of those homes suffering major damage or being destroyed completely.