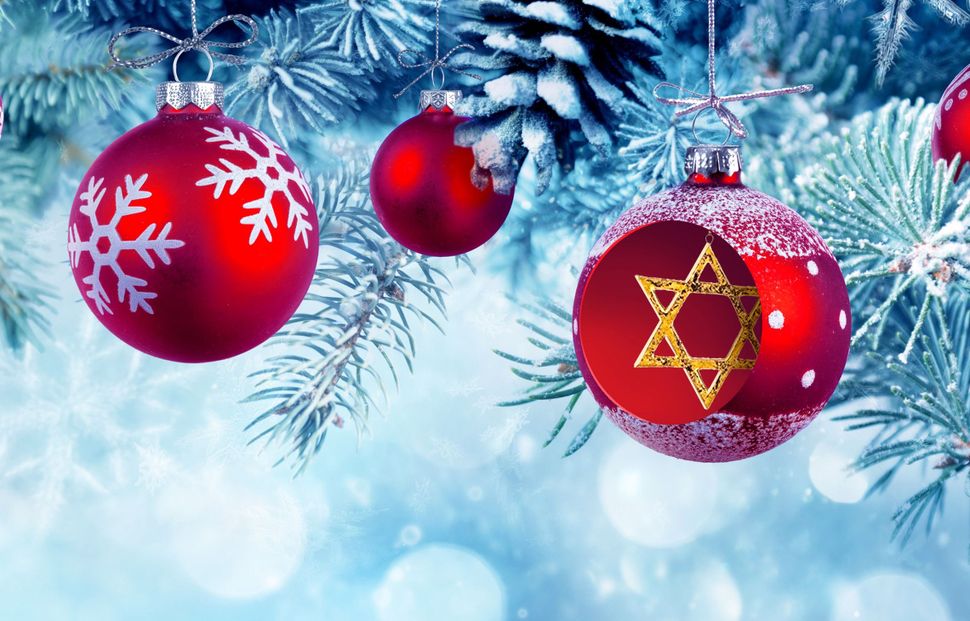 Cliff Adler is the son of two German Jewish refugees. He is also co-president of one of the world’s largest Christmas ornaments business, a company founded and run for over half a century by those same refugees.

So what’s the first thing in the company’s showroom that he wants to show off to a reporter from the Jewish Daily Forward? The Hanukkah ornaments, a collection of painted glass baubles that sparkle blue and white instead of red .

On a recent morning at the company’s headquarters on 42nd Street in Manhattan, Adler asked an employee stringing Christmas bulbs where they were.

“They’re in the back,” the man replied.

It’s a small display, helmed by the Hanukkah Treetop, a light-up Star-of-David number made famous on Shark Tank. Shiny menorahs and sufganiyot (Hanukkah doughnuts) hang next to a Santa Claus holding a dreidel. The gimel is facing out. Adler notes that the collection is not a best-seller.

“People get them because they want to be politically correct,” Adler said with a chuckle. “They’re usually an afterthought.”

While the Hanukkah ornaments might have special meaning for Adler, they are a tiny corner of his father’s eponymous business, Kurt S. Adler, Inc. Once a refugee who fled the Nazis, Kurt Adler turned his small export business into an iconic importer of holiday decorations that’s known as a giant in the trade. Like Jewish department store owners and the Jewish composers behind the best-known songs of the season, Adler helped shape — and secularize — American Christmas culture by celebrating its non-religious aspects. After seven decades running a successful Jewish-owned business that brings joy to the (gentile) world, the Adler family is comfortable with the contrast.

“If somebody says, ‘Isn’t it kind of odd?’ I say, ‘Well, your guy was Jewish to start,’” said Cliff Adler, who has served as co-president since his father’s death in 2004.

From its roots as a literal mom-and-pop shop, Kurt S. Adler, Inc. has become a globe-spanning operation, with offices in Hong Kong and Taiwan. It has over 100 employees, Cliff Adler said. Profiles of the company in publications like Giftware Business and Holiday Decor Magazine call it the world’s largest importer of holiday decorations. Though their catalogue now boasts over 20,000 items, the company retires half of their items every year in favor of new ornaments and decorations, which get shown to potential buyers in over a dozen permanent showrooms around the world.

The Midtown Manhattan showroom exists in a perpetual state of wintry cheer, with fake evergreen branches twirling across the tops of the displays. Arranged in a maze-like fashion, the booths carry the viewer from glass-encrusted reindeer to Game of Thrones ornaments, from pine cone owls to Peppa the Pig. Santas of all sizes (all of whom are white) can be found around the floor like garden gnomes. Christmas lights grow like ivy.

At the center of the room is a vividly lifelike artificial Christmas tree. 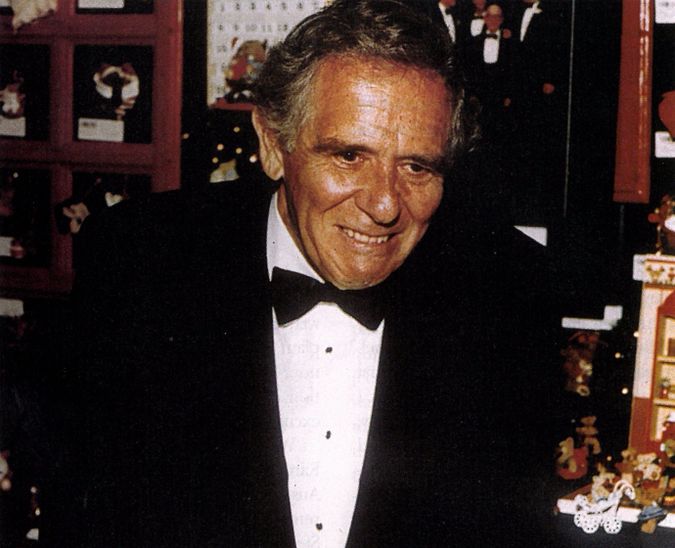 The showroom’s festive feel is a far cry from its founder’s story. Kurt S. Adler was born to a Jewish family in a city in Bavaria, in southern Germany, in 1921. At the age of sixteen, with sponsorship from an uncle living in America, his parents sent him to the U.S., alone, to escape state-led violence against Jews. Though unable to speak English at first, Adler quickly found work and began high school in New York. His parents and sister joined him in 1938.

After serving as a clerk in the army, Adler started an export business using contacts made while stationed in Honolulu. He sent pineapples to Switzerland and umbrellas to Nicaragua, as he liked to say. After the business folded, he began importing goods, starting with decorative birds from Germany.

By the 1950s, Adler had hit on the idea of bringing a northern European sensibility to American Christmas, seeking out ornaments and decorations with a distinctly Germanic charm. (Germans, after all, invented the Christmas tree.) Most American families of the era used simple glass balls and tinsel for their trees. Adler introduced them to nutcrackers, angels and reindeer, helping transform the image of Christmas in America. In 2002, “Austrian, Swiss & German Life” magazine called him “America’s Father Christmas.”

“He brought the taste level up,” Cliff Adler said. 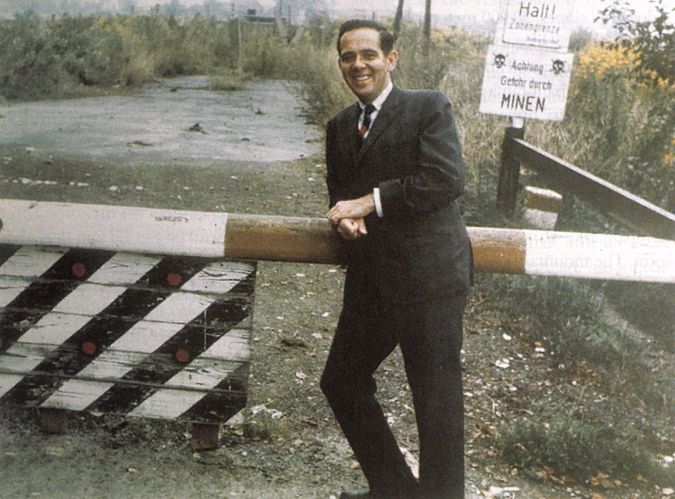 Kurt Adler visiting the border between East and West Germany sometimes in the 1960s. Image by Cliff Adler

Kurt Adler was one of a large number of Jewish businessmen and cultural leaders who, going back hundreds of years, invested in the holiday season to promote their businesses. From Irving Berlin to Neiman Marcus, Jews plied their trade for the sake of Christmas cheer — and profit.

“As long as Christmas has been there, there have been Jewish entrepreneurs, whether they were peddlers going door to door or owners or large department stores,” said Hasia Diner, professor of Jewish history at New York University and author of “The Jews of the United States, 1654 to 2000.”

“They were not there to foster interfaith goodwill,” she added. “They were there to make money. And this was a golden opportunity.”

That the commercialization — and secularization — of Christmas could be linked to Jews eventually put an American twist to the age-old trope that Jews are out to kill Christianity.

Critics of the Jews would say, “‘They’ve seduced Christians who would have otherwise celebrated it as a religious event,’” Diner said. “Which is ridiculous, of course,” she added, since there were gift-giving traditions in places all across America that were devoid of Jewish-owned businesses. The intentions of Jewish businessmen and songwriters were pure, if decidedly capitalist.

“The fact that it was Christmas was on some level irrelevant,” Diner said. “It was meaningful to potential customers.”

‘A German kicked out of his country’

The Adler business, its feet firmly planted in New York City, was a family affair for many years. Kurt Adler’s wife Beatrice was office manager for decades. She and her parents had fled Germany in 1938, first landing in Palestine before coming to the U.S. Beatrice’s father worked as a salesman for the company, maintaining accounts in Alabama, Georgia and Mississippi. Kurt’s father helped crunch the numbers.

Kurt Adler never tried to hide his origins, especially not in his home country. At hotels and restaurants in Germany, he would tell the people he met that the oppression of Jews under the Nazi regime had forced his family to leave.

“He was happy to talk about because he wanted them to know, ‘I did fine without you,’” Cliff Adler said.

“He always felt he was a German who had been kicked out of his country,” Adler added. “He’d never forgiven them.”

Though the family was never religious, Judaism was an inextricable part of Kurt Adler’s identity. When Beatrice died, after nearly four decades of marriage, he remarried — to a Catholic woman with a zest for Christmas. Little did she know that Adler did not like to mix business with pleasure.

“He said, ‘I give up, she wants a Christmas tree. It’s only a question of which bathroom it’s going in,’” Cliff Adler recalled.

Kurt Adler was also a stickler for quality. He claims to have been the first to envision knit Christmas stockings, now a staple of many a mantelpiece. In a feat that has become legend, he once had a tree shipped from Germany’s Black Forest to his factory floor in New York City, to inspire his artisans to create the world’s best looking fake tree. The result was so lifelike, a fire marshal ordered it removed from a local retail store.

Since Kurt Adler’s passing in 2004, the company has been helmed by Cliff Adler and his two siblings. He and his brother Howard are co-presidents. Their sister Karen Adler is the CFO. 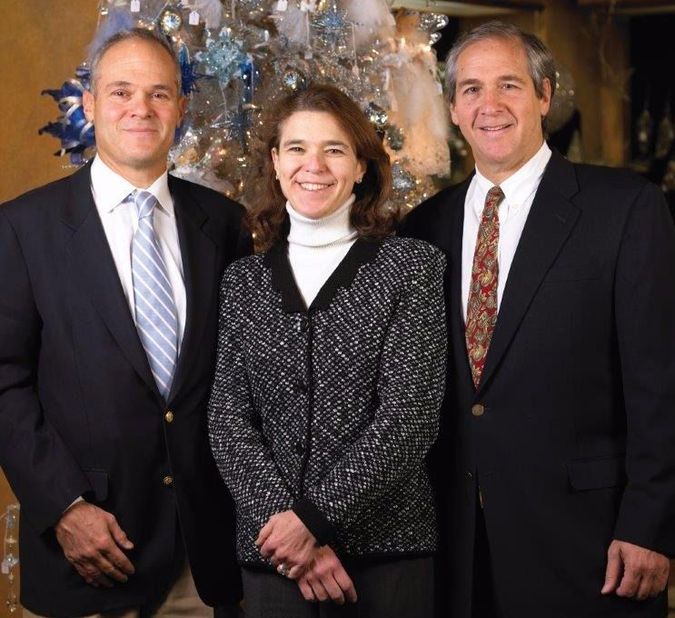 In Kurt S. Adler, Inc.’s quest to stay relevant, the company has placed its bet on — what else? — an app. Twinkly lets you program color and design of your Christmas tree’s lights from your iPhone. You can imitate falling snow, or have your tree blink red and green. (“The search is over for Christmas fans looking to pimp their tree,” reported the British tabloid The Sun.) The app is a response to the buying trends of millennials. But for Cliff Adler, the core of the business is still ornaments, ornaments, ornaments.

Though nine of ten Americans say they celebrate Christmas, millennials are less likely than any other demographic to say they celebrate it as a religious holiday, according to the Pew Center. The company, for its part, insists that only a fraction of their products are overtly religious. That dovetails with Jewish attitudes about Christmas imagery: fully a third of American Jews will have a Christmas tree in their home by December 25th.

He also said he hopes to keep the business in the family. His niece Stephanie — daughter of Howard — works in product development. And neither he nor his siblings have any plans to retire.

“I really love the fact that it’s a family business,” Adler said. “I get a kick out of it.”

Last week, ahead of Christmas, the company’s offices were rather calm. Their main showcases occur at the beginning of the year — the look of Christmas 2018 will be on view in Atlanta on January 9th. Mega-retailers like Walmart already made their 2018 orders this fall. Though the showroom is always festooned with every manner of Christmas decoration, it lacked the telltale buzz of an office on the verge of a holiday.

“It’s not any big deal,” he said. “We don’t sing Christmas carols.”