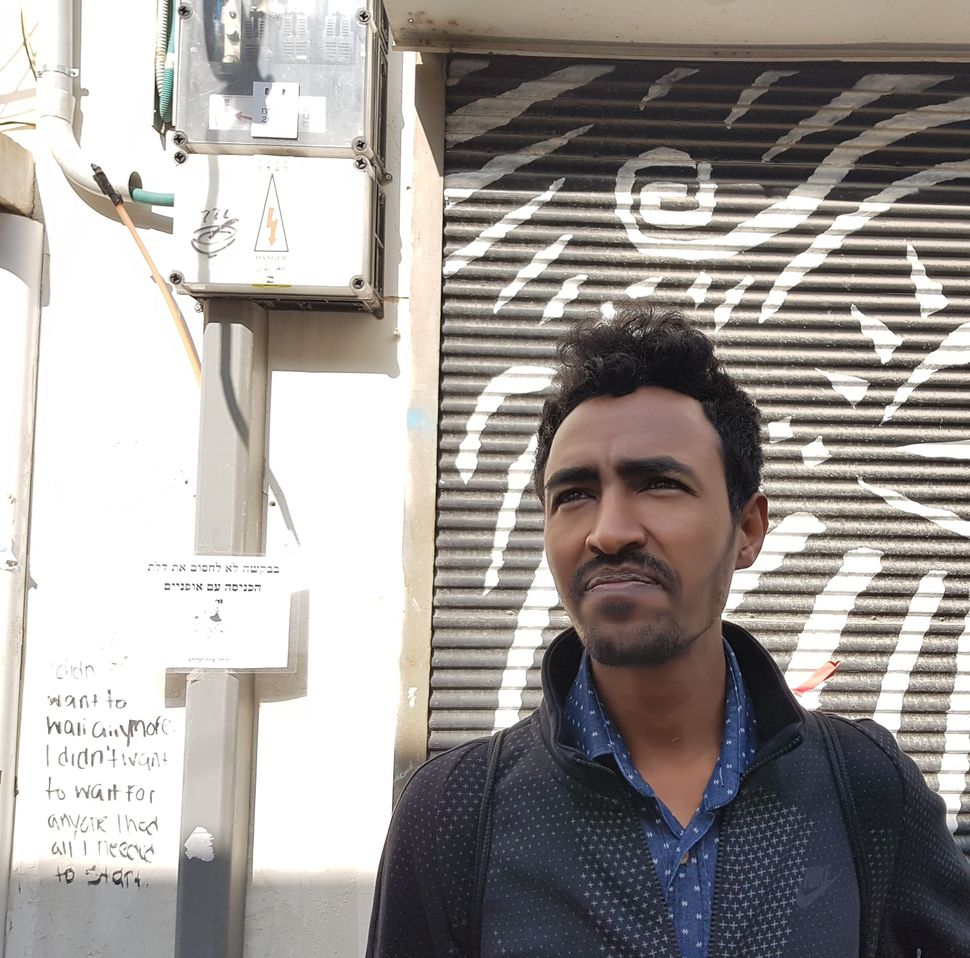 Teklit Michael, an asylum-seeker from Eritrea living in Tel Aviv, is waiting to see if he will be deported to Rwanda. Image by Ilan Ben Zion

On the face of it, Teklit Michael is similar to so many Israelis living in Tel Aviv. He just marked 10 years living in the city, works at a non-profit, and speaks fluent Hebrew and English.

But after a decade in Israel, he might get sent packing to a country he’s never been to before, where he doesn’t speak the language, doesn’t have friends or family, and has no prospective future.

Michael was one of thousands of African asylum seekers who protested last week outside the Rwandan embassy against Israel’s plan to deport tens of thousands of people who entered the country illegally.

The Israeli government has given the country’s 37,000 African asylum seekers 60 days to accept $3,500 and a plane ticket to Rwanda or face incarceration starting in April.

The vast majority of the nearly 40,000 Africans in Israel are Eritreans and Sudanese who fled their countries for Israel from 2005 to 2015. Israel’s construction of a fence along the border with Egypt’s Sinai Peninsula, completed in 2013, drastically reduced the number of refugees entering the country. None entered in 2017.

According to the Population, Immigration and Borders Authority, there were just over 37,000 asylum seekers and refugees in Israel as of December 31, 2017, after 3,375 left the country voluntarily in the previous year. Of those 37,000, 92% are Eritrean and Sudanese.

Since then they have worked in menial jobs that most Israelis don’t want: washing dishes, cooking in restaurants, cleaning and maintenance at hotels. The Israeli government contends these people are job-seeking migrants, and refers to them as “infiltrators.”

Michael, 29, grew up in the Eritrean capital, Asmara, which he describes as a blend of Europe, Africa and the Middle East – not too different from Tel Aviv. But the country “is completely ruled by fear,” he said. To escape the country’s repressive dictatorship and open-ended military draft that has been likened to slavery, he embarked on a trek across Sudan and Egypt to reach Israel. He was 18.

“I never had a dream or a choice to come to Israel first,” he said. After arriving in Sudan, he faced discrimination and hardship, so he set out for Israel through Egypt. Bedouin smugglers in the Sinai tortured and tormented the mostly Christian Eritreans because of their faith.

After arriving in Israel, he worked odd jobs in construction, cleaning, cooking in restaurants, all the while living in down-and-out south Tel Aviv neighborhoods. Today he works as a community organizer for the Eritrean Women’s Community Center in Israel, an organization that offers English and Hebrew language classes, legal aid and vocational training.

“Most of my friends are Israelis, that’s why I learned Hebrew well,” he said, “and there are a lot of people who have no idea what they’re talking about, just hate.” But there are people like that everywhere, he says, and they’re not the majority. Michael said he brooks no ill feelings toward Israelis, but cannot abide by the government’s policies toward people like him.

A growing number of Israelis are speaking out against the imminent deportation of African asylum seekers. El Al pilots have said they’d refuse to fly the planes to African countries receiving deportees. Dozens of café, bar and restaurant owners signed a letter petitioning Prime Minister Benjamin Netanyahu to halt the deportation plan, expressing concern that “many of them are expected to undergo difficult tribulations and will face the threat of death.” Yossi Vardi, the entrepreneur and godfather of Israeli high tech, is leading a campaign by major Israeli business leaders against the policy; he recently called it “insensitive, inconsiderate, and un-Jewish” in an interview with Army Radio. A building-sized banner in central Tel Aviv opposing the deportation of African asylum seekers reminds readers of Deuteronomy 10:19: “Love ye therefore the stranger; for ye were strangers in the land of Egypt.” 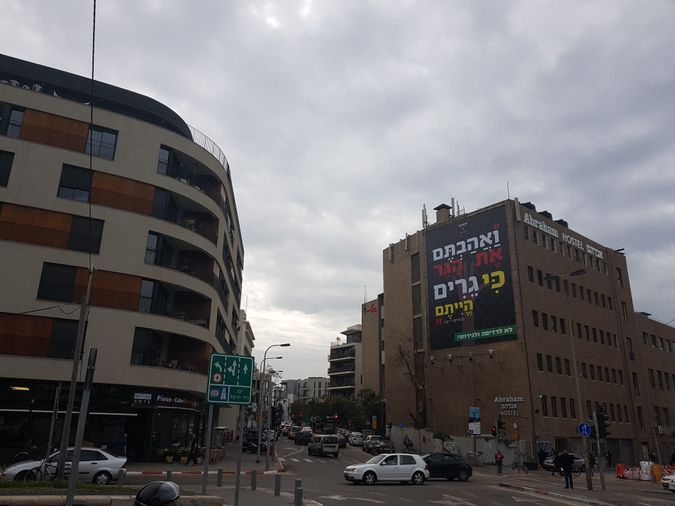 A building-sized banner in central Tel Aviv opposing the deportation of African asylum seekers reminds readers of Deuteronomy 10:19: “Love ye therefore the stranger; for ye were strangers in the land of Egypt.” Image by Ilan Ben Zion

Like many thousands of his fellow Eritreans in Israel, Michael submitted an application for political asylum four years ago, which, if approved, would allow him to stay and work in the country legally without risk of deportation.

The Population, Immigration and Borders Authority reported that it received 15,400 asylum requests from illegal immigrants between 2009 and 2017, and approximately 2,600 Eritreans and Sudanese requested asylum in 2017 alone. PIBA says that it has dealt with 6,600 requests by African asylum-seekers, and have approved just 11.

But the regulations state that asylum seekers must apply within a year of their arrival in the country. Michael calls the whole process “a hoax.” Four years after he applied for political asylum, he has yet to receive a response from the Israeli authorities.

Michael said that Israel’s plan to deport African asylum seekers to Rwanda or Uganda was illegal and no different than the human trafficking happening across Africa today.

“There are people who are active, like me, who have the same concern like me because of the reality,” he said. “Other people lost hope in humanity. From their childhood nobody gives them a chance to live.”

With the deadline looming, Michael said he’s not concerned for himself, “but for others, yes.”

“Right now, if they’re deported to Uganda or Rwanda, the human trafficking network is already created, and it’s easier for them to smuggle people and take them to other countries, like Libya,” where they may wind up in the hands of the Islamic State, he said.

Neither Rwanda nor Uganda have any place for him or other Eritreans, who don’t speak the local languages or associate with the local cultures there. Eritrean and Sudanese asylum seekers who “voluntarily” left for Uganda or Rwanda in recent years had their testimonies published last month by Israeli NGO under the title “Better a Prison in Israel than Dying on the Way.” The 19 people interviewed made their way from Rwanda and Uganda to Europe, after the promises of security they received from Israel went unfulfilled. The interviewees all recalled that upon landing in Rwanda, their Israeli-issued identification was taken from them without a replacement, some had the money given to them taken away, and none were granted asylum status.

“They told us that in Rwanda we will meet the immigration office… ‘You will get what you want, you can also stay in Rwanda, you will have all the things there’ … but as we get out of the airport, they send [us] to Uganda,” Yohanes, one of the interviewees, told the researchers.

The report authors said that from speaking to the 19 interviewees, “It was evident from the testimonies that the refugees felt scared, pressured and insecure. Some stressed the fact that they had never been to Rwanda — they don’t know the country, don’t know the local language, have no connection to people living in it and don’t have a way to navigate the country on their own.”

The report painted a grim picture of what may await the thousands of African asylum seekers facing the choice of deportation or incarceration in April.

If there were democratic freedoms in Eritrea, Michael said he would go back “in a minute,” but for now, that’s simply not a reality.