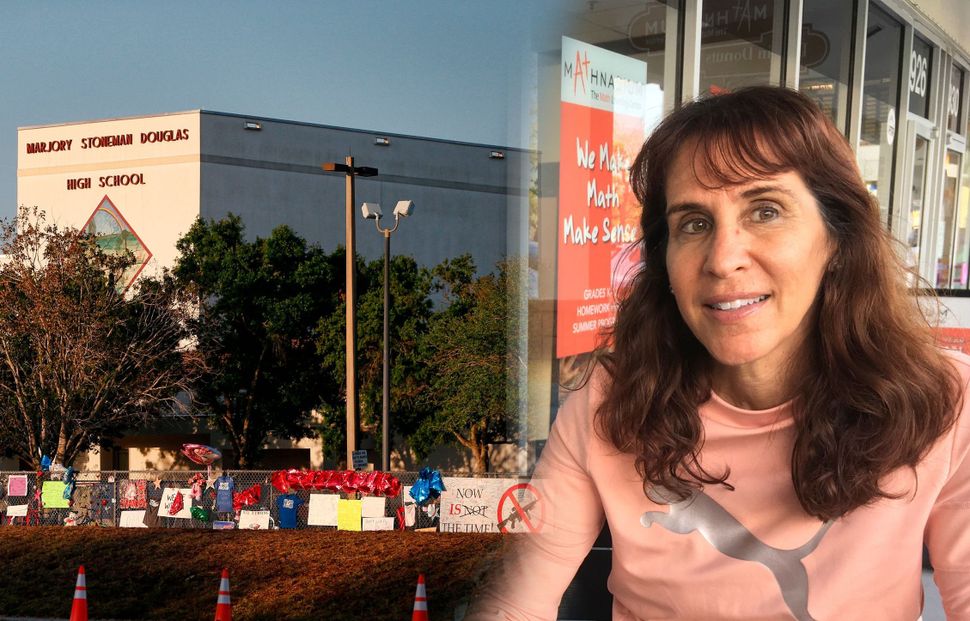 All year long, Marjory Stoneman Douglas High School teacher Ivy Schamis teaches her students about the Holocaust: about perpetrators, victims and survivors both historical and contemporary.

She never imagined she would find herself using those words to describe her own students, her colleagues — even herself. Eight weeks ago, when students had just finished presenting research about the hate groups operating today on American college campuses, that changed. Nikolas Cruz, an expelled student armed with an AR-15, thrust his semi-automatic assault rife through her window. Two of the 17 students who died that day were Schamis’; she’d taught another one the year before.

“One of [my students] said to me, ‘We used to watch the news,” Schamis explained in a conversation in a coffee shop less than a mile from the school, her eyes tight with sadness. “Now we’ve become the news.”

The student activists forged in the crucible of the shooting have drawn on the lessons she taught in her classroom, decorated with barbed-wire painted on the walls, Never Forget posters and an “Arbeit Macht Frei” sign over her desk. She will never be allowed to go back there; the building is going to be destroyed. But she continues to teach, and they continue to learn. Life is just very different.

It’s not the kind of fame anyone would wish for. There is no silver lining to being the latest American town or school that when you hear its name – be it Sandy Hook or San Bernadino – you will forever think: mass shooting.

But there is a newfound strength amid the sorrow. Parkland students and teachers may cry easily, may overreact to the sound of a slamming door or feel some days like they can hardly bring themselves to walk in that classroom. But there is also a resolve, a determination, and a drop of pride that these are the students who are standing up and shouting for change.

It’s no coincidence that in the harrowing, sleepless days following the shooting, the students adopted #NeverAgain – and #NeverAgainMSD as a calling card for their nascent movement. It was the students’ idea entirely, but the experience of being in the class clearly left an imprint – and perhaps helped fire up their urge to speak out.

“’Never Again’ is not a trademark,” says Schamis. “The lessons of the Holocaust came into our classroom on Valentine’s Day.”

At the “March for Our Lives” rally in Washington, D.C. on March 24, one of the most memorable speeches was by Stoneman Douglas senior Samantha Fuentes. That fateful day in class, Fuentes saw Nikolas Cruz appear at Schamis’ window, looking emotionless. One of his bullets pierced her thigh and shrapnel was lodged in the other leg, as well as in several places in her face, including behind her eye. Neither scars nor pain – nor nausea that made her throw up in the middle of a speech being televised around the world – caused her to stop speaking out.

“I was incredibly proud of her,” says Schamis. “She said, ‘I was sitting in my Holocaust class’ when this happened.”

Five out of 17 victims of the Feb. 14 massacre were Jewish; a few more had Jewish ancestry. At one point soon after the shooting, Schamis thought perhaps Jews were the target – given that Cruz, who adorned backpacks and ammunition with swastiskas — came to the building where she and many other Jewish teachers taught. But that was ultimately not the case, she said; he fired indiscriminately and killed teachers and students of all backgrounds.

The memory that the shooting happened on Valentine’s Day, which is supposed to be the day of love, takes Schamis from Dunkin’ Donuts back to the class, to what is was left there, to a scene so horrific that SWAT team members who evacuated survivors told them not to look down as they left the building.

These are the things that Ivy Schamis left in room 1214, and which she still hasn’t been able to retrieve because evidence of the crime will be presented to jurors in Cruz’s trial: Her vast collection of Holocaust books, some of which students instinctively grabbed for protection as they crouched along the walls. Her trove of educational materials. A heart-shaped box of chocolates with puppies on it — a gift from a student just a short while earlier. And, the memories of the last time she saw Helena Ramsay and Nicholas Dworet, two students who were shot to death in the place where a teacher comes to school to act in loco parentis.

In a crowded hallway it would be easy to mistake Schamis for a high school student. She’s slim, down-to-earth, and on this day, dressed in a sporty PUMA shirt which she says is a tribute to Dworet, a swimmer who had been accepted to study at the University of Indianapolis on an athletic scholarship. It’s the first day in a long time that she went to school in something other than a Stoneman Douglas t-shirt or sweatshirt of one sort or another. To a reporter and to anyone who might be interested in spreading the word, she gifts a few pins and heart-shaped car magnets in maroon, the school color, emblazoned with the #NeverAgain hashtag. There probably aren’t many large public high schools in which the teacher takes the class out for ice cream, and allows students to text her at off hours. But now more than ever, Stoneman Douglas isn’t just every school – and Schamis isn’t just any teacher.

Hannah Carbocci, a junior in Schamis’ Holocaust class, says they’ve grown extraordinarily close, and they keep in touch with a group chat when they’re not at school.

“Mrs. Schamis is amazing at what she does – she has years of experience teaching and she’s really adamant people about knowing their information,” Carbocci said in a phone interview. Of course, everything about the course has “changed dramatically” since February 14, with support being more important than trying to force a return to normal with rigorous academics. “Not everyone shows up to class each time – there are some days when some people feel they just can’t go,” says Carbocci, 16. “But somehow, we all hold each other up.”

And remarkably, Schamis holds it together, even if it meant having a cry in her car many mornings before she walked into that school. Administrators have divided what used to be the yearbook room, in another building on the school’s campus, and put her in half, separated by a temporary room divider from another class. Other teachers who lost their classrooms have to make do with moving around all day.

Ronit Reoven, who teaches AP Psychology, is one of them. The two women have become close friends since they started teaching across the hall from each other in 2009.

“I myself go between three different classrooms. You don’t feel settled. We’re going back to our curriculum, but certainly not in the same force that we did before. Most teachers have been cautious,” Reoven says, as many students are unable to focus, distracted, and still haunted by what happened.

“You’re a teacher, but now you’re kind of like the mommy, the therapist, the nurse. It’s challenging. Ivy, she just puts on a smile. Her spunk, her energy, her enthusiasm — she’s a strong woman,” Reoven adds. “She’s always been optimistic and positive. She’s very high-spirited.”

Schamis notes that the support of her husband and two grown children have helped her cope. She’s also finding comfort from an unexpected new addition – a friendly golden lab named Luigi. PAWS Assistance Dogs based in Naples, Fla. has provided him for emotional support. Luigi, who has his own Instagram account and more than 2,000 followers, comes to class with Schamis and accompanies her around school. And when students feel like having a comfort snuggle, he’s there.

“It was like a combat zone in there. For weeks afterwards my heart was racing all the time. Now I have Luigi and he really calms everyone down.”

Reoven notes that the atmosphere is changing, and that many in the community have moved from grief to anger, as more information arises about how the attack was handled. “We’ve done so much crying together, been to so many funerals and wakes and shivas (the Jewish gathering after a death) that much of our tears have dried up. Now it’s about trying to stay strong for your students. Keeping your sanity. You have these beautiful, young faces looking up to you, so you have to get through your day for them.”

Schamis is glad that Broward County School Board voted unanimously last week against accepting state money so that school personnel can be trained to carry guns on campus.

“Can you imagine me? This guy is blowing through our classroom with an AR-15 and I’m going to try to take aim at him with a handgun hidden in my desk? No teacher should be asked to do that.”