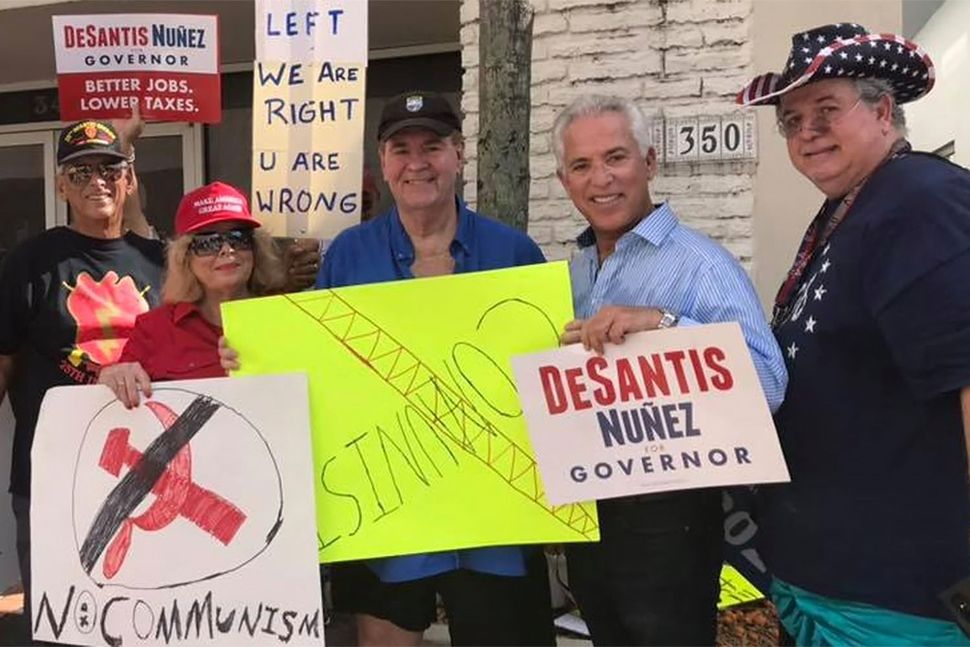 The head of Florida gubernatorial candidate Ron DeSantis’ Jewish outreach around Miami attended a Republican protest outside a campaign event that included participation by two members of the white nationalist group the Proud Boys — and later caused a party leader to apologize.

Miami-Dade Jewish outreach chair Corey Breier, who also donated $2,000 to the campaign, is pictured in multiple Facebook posts and an AP shot holding a DeSantis placard at the Oct. 17 demonstration outside a Coral Gables event for Donna Shalala’s House campaign.

Video taken at the event by one of the Proud Boys shows Republican protesters shouting “communist” at House Minority Leader Nancy Pelosi and then violently pounding on the door she had just entered.

“You don’t belong here you fu**ing communist,” one person is heard on video yelling at Pelosi (D-CA) as she is escorted down a narrow alley into the side of the building.

“Open up, it’s the Proud Boys in here,” one of the demonstrators can then be heard saying as people start to pound on the door Pelosi had just entered.

At least one of the Proud Boys attended the protest to look after conservative candidate Mayra Joli, she said.

“That Proud Boy was sent there to protect me,” Joli told the Forward in a phone call. “When I arrived [at the protest] the crowd was still fired up.”

Her campaign manager, Ingrid Carvajal, confirmed she asked her boyfriend, Proud Boy member Alex Gonzalez, to keep Joli safe from Republican leaders angry about her campaign. She said Gonzalez then asked another Proud Boy friend to attend and the campaign manager added she had no idea both men would show up as members of the group or that Gonzalez’s friend would scream at Pelosi.

Breier, who is also listed as the vice chairman of the Republican Party of Miami-Dade County, does not appear in the video and it was not immediately clear where he was standing when the minority leader arrived.

A photo of the event posted on Twitter shows the man identified as Gonzalez holding the Proud Boys flag.

The Proud Boys, called a hate group by the SPLC, joined the Miami Dade GOP’s protest of Shalala’s office event with Pelosi yesterday

Gonzalez “isn’t part of the Republican Party nor was he invited to attend,” a spokesperson for the Miami-Dade GOP told the Forward via email.

The spokesperson — who did not identify him or herself, but responded to an email request — said they were not aware of the hate group before the protest.

“We didn’t know who proud boys were. Out of the 60 people in the event only 1 of them was from that group,” the person said.

However, the party chair, Nelson Diaz, apologized for his “unbecoming behavior” at the protest, even as he repudiated the Proud Boys.

The person did not deny Beier attended the protest and would not say if the chair confronted the Proud Boys or left before Pelosi arrived.

The incident happened several days after members of the group, who describe themselves as “western chauvinists” and are labeled a hate group by the Southern Poverty Law Center, were seen on video attacking counter-demonstrators near the Metropolitan Republican Club in Manhattan.

Several Proud Boys members have since been arrested and charged with gang assault, rioting and criminal possession of a weapon.

Breier posted a photo of himself standing next to DeSantis on his Facebook account on Aug. 28, and described the candidate as a “dear friend.” 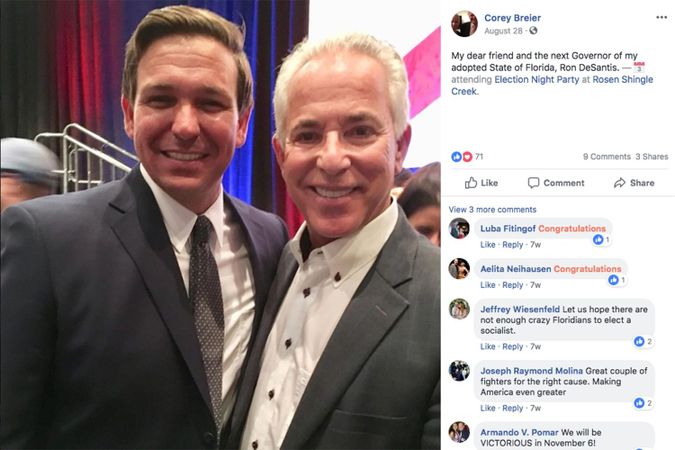 The outreach chair helped organize a pro-Israel DeSantis event outside a bagel store and deli several days after the protest.

“Please join us to say ‘Thank you Ron DeSantis’ for your support of Israel, your fight against BDS, fighting anti-Semitism on the college campuses and funding for school security,” he wrote in the Facebook post. Breier then signed the statement as the “Miami-Dade Jewish Outreach Chairman.”

The demonstration appeared to have been initially organized by Nelson Diaz, the Republican chair of Miami-Dade, the Washington Post reported.

“Up until a few days ago, I had never heard of [the Proud Boys],” he reportedly told the Post in an email.

Diaz was also reportedly one of the people seen pounding on the door after Pelosi entered.

Rep. Steve Scalise (R-LA), who was nearly killed in a 2017 shooting at a congressional baseball practice, condemned the protesters in a tweet.

I don’t agree with Nancy Pelosi’s agenda, but this is absolutely the wrong way to express those disagreements. If you want to stop her policies, don’t threaten her, VOTE! That’s how we settle our differences. https://t.co/mr4sov7gSK

The DeSantis campaign did not return a request for comment.

Breier is listed a member of the Florida Zionist Organization of America.

His ZOA bio says he is also a member of the State Executive Committee of the Republican Party of Florida and active in a number of Jewish groups in the state.

A ZOA spokeswoman told the Forward she unaware of his attendance at the protest and did not comment further when reached by phone.

Multiple attempts to reach Breier through the DeSantis campaign, ZOA and Florida Republican Party were unsuccessful.

This is not the first time the campaign has been negatively connected to a Republican Jewish activist.

Florida donor and former ZOA board member Steven Alembik caused a national firestorm after he called former President Obama the n-word in a tweet.

“We’ve said it before, we’ll say it again: we adamantly denounce this sort of disgusting rhetoric,” DeSantis spokesman Stephen Lawson said after the incident.

The gubernatorial candidate and former congressman was accused of using a racist dog whistle after winning his primary when he said voters should not “monkey this up” by voting for his African American Democratic rival Andrew Gillum.

The Florida governor’s race has major implications nationally since whoever is elected will help shape congressional districts following the 2020 census, which could have a major impact on the next presidential election.

The Gillum campaign did not return an immediate request for comment.